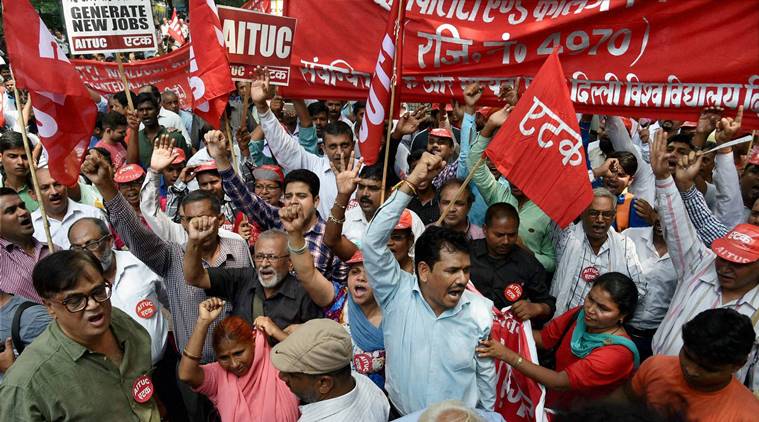 Recently, 200 million workers went on strike in India. The two-day nationwide strike, which occurred Jan. 8 and 9, has been dubbed the biggest labor strike in the country’s history. This is India’s 18th-ever nationwide general strike against what many call “anti-worker” policies.

The first cause for the strike is the Trade Unions (Amendment) Bill proposed by the Bharatiya Janata Party (BJP) government August 2018.

“While the bill proposes to give statutory recognition to labor unions from both the state and central government, it also seeks to give the respective governments wide-ranging discretionary powers in making that decision,” according to a MR Online article regarding the strike. This bill marked the beginning of what many call “anti-labor” policies enacted under the current prime minister, Narendra Modi.

Prime Minister Modi, who promised more jobs during his campaign, also inflamed many Indians’ desire to strike. There are approximately 520 million workers in India, and only about 10 percent are employed in formal enterprises.

The strike was held just a few months before the general elections in which Prime Minister Modi and the BJP government are campaigning for a second term.

This recent strike was organized and led by the same 10 unions that went on strike months earlier, after issuing their 12-point charter of demands to revive workers’ rights and restore the economy. This time they were accompanied by farmers, independent workers and others calling for a change. As with last time, the unions are requesting the government meet their needs as stated in their 12-point charter.

Among the workers participating, seemingly all sectors were represented, public and private: agriculture, education, defense, postal and others. Despite the diverse group of strikers, many workers were unable to join. In Tamil Nadu and West Bengal, for example, the state governments denied permission for workers to strike. Those providing emergency services across the country were prevented from participating, as well.

Considering its enormity, the strike has impacted everyday life for citizens. Private buses and tourist taxis remained off the road, rail traffic was disrupted and schools and colleges were closed.

While some conflict occurred throughout the two-day strike, it was considered generally peaceful. It has been reported that police and workers were injured, vandalism took place throughout the country and arrests and detainment were made.

Mason’s Indian Student Association (ISA) was asked for a comment but explained that, while they embrace their cultural similarities and have many celebratory events, they seldom discuss current events in India.

“Our organization does not like to take a political stance on issues,” a representative explained.

Separate from the organization, Isha Mahadeshwar, a freshman at Mason and ISA member, expressed her opinion.

“The government needs to be unbiased in terms of providing and improving job opportunities regardless of income and status in society,” stated Mahadeshwar. She concluded, “I hope that Modi keeps his word about the future of India, and I hope that the government takes action soon.”