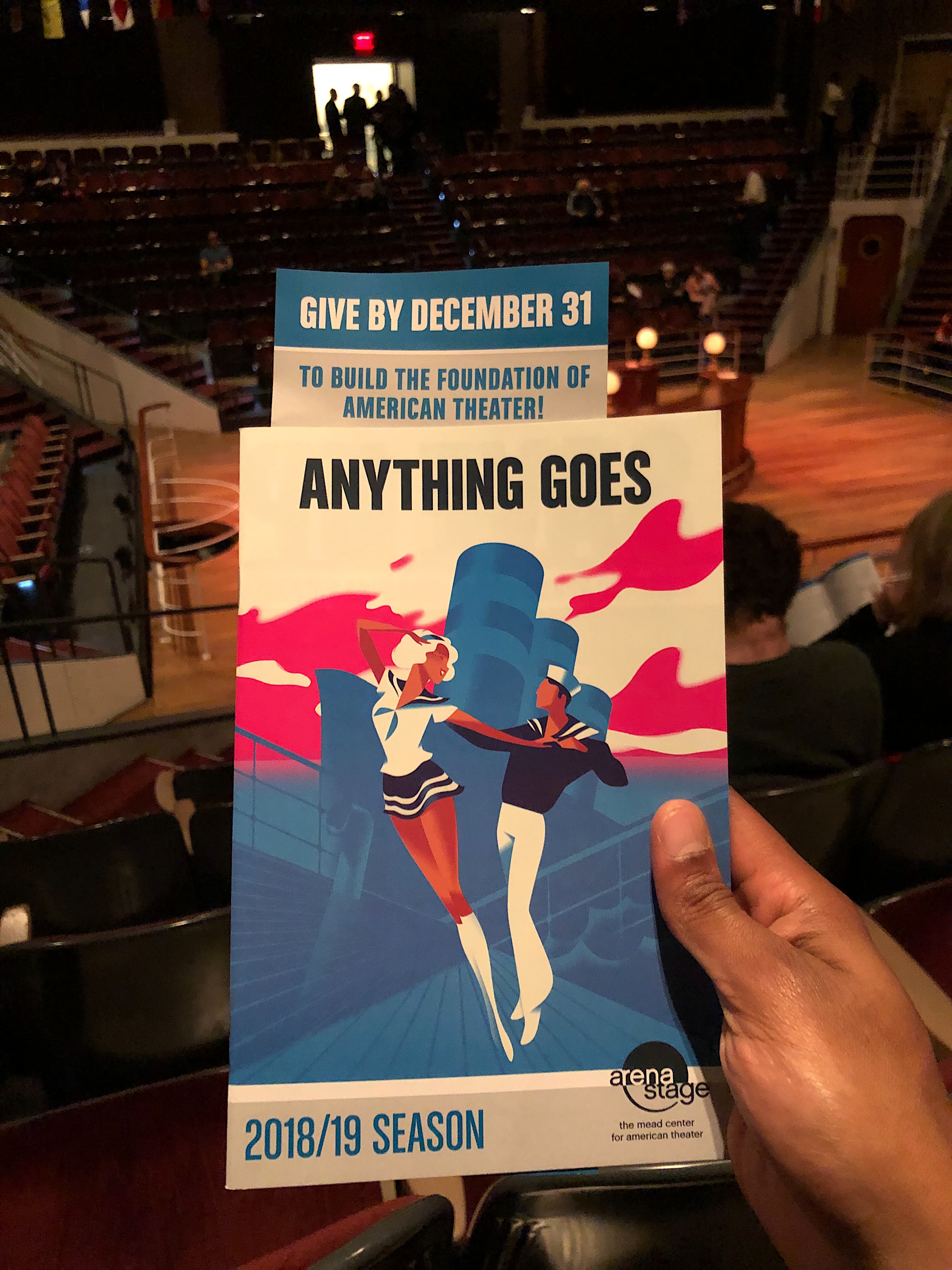 Housed within the beautifully constructed Arena Theater in D.C., a brilliant reworking of the American classic “Anything Goes” is delighting audiences show after show in the nation’s capital. The show includes Mason alumna DeMoya Watson Brown, who plays Ensemble/Angel and is the understudy for Evangeline Harcourt.

The play was originally written in 1934 by P.G. Wodehouse, Guy Bolton, Howard Lindsay and Russel Crouse. It was scored by composer Cole Porter, winner of the first Tony Award for Best Musical for a musical he provided music and lyrics for, “Kiss Me, Kate.”

“Anything Goes” captivates audiences with breathtaking live singing, acting and dancing like only a musical can. The live and in-person nature of a play does an excellent job of displaying the individual talent of each fantastic cast member.

The musical is set in the Roaring Twenties, when being debonair and preserving a constant state of gaiety took precedence over just about anything else. For the select few, the U.S. could never have been greater. Largely a play of privilege, the affluent characters help remove viewers from the monotony and logistics of everyday life.

The characters in the musical resemble different stereotypes of members of early-20th-century society. There are the British nobleman and his high-class American wife, the devious yet charming nightclub singer, the comical gangster with his semi-promiscuous female sidekick and a not-so-politically-correct depiction of two Asian immigrants.

The audience follows the story of Billy Crocker, played by former “High School Musical” star Corbin Bleu, as he relentlessly pursues Hope Harcourt, a woman he fell in love with at a party, by stowing away on a ship headed toward London. Billy soon finds out that she is to be wed to Lord Evelyn Oakleigh, yet he still chooses to remain on the boat despite his boss’s request for him to be in Wall Street the next morning.

Together, the cast embarks on a naval expedition of sorts from New York City to London. By the end of the production, three new couples have formed, and many lessons about life and love are shared among each other.

This particular rendition of the show takes massive creative liberties in regard to the choices of actors for important roles. For example, Billy Crocker, Reno Sweeney and Hope Harcourt, some of the musical’s principal characters, are all people of color.

The time period when the musical was originally written and scored for Broadway all but literally implies that a vast majority of the characters are White, except for the two Chinese stowaways.

Bennett continued, “I definitely think all of the choices were intentional.”

Bennett also thinks that it does not make sense to try to create art from a perspective that is not representative of today life. “We want to be creating classic theatre for today’s audience, which is everyday’s America,” Bennett said. He argued that directors and actors should draw from today’s influences to connect with today’s audience.

Some of the musical’s social antiquity is made clear in the way that the two Chinese men are portrayed as sinners who are essentially conning a priest into a free trip to London. Bennett also believes that these “insensitivities,” as Bennett called them, should be amended.

Originally known as Ching and Ling, now Luke and John, the two immigrant men are constructs of a different era. Their roles still remain risqué, but almost seem to serve as a reminder to the audience of how far American society has progressed.

The addition of people of color in this version of the musical adds an element of modernity that helps the audience better picture the show in the far-more-multicultural age in which we all currently live.

It also acts as a defiant and poignant message from Director Molly Smith. The casting itself is a theme that adds new dimension to the 84-year-old Broadway production.

When asked if there was any backlash from audience members or critics about the casting, Bennett simply replied, “No.”

Regardless of time, multiple script changes and a whole new philosophy behind casting, the ability of “Anything Goes” to whisk away audiences to a place of carefree, hard-swinging times remains truly extraordinary.