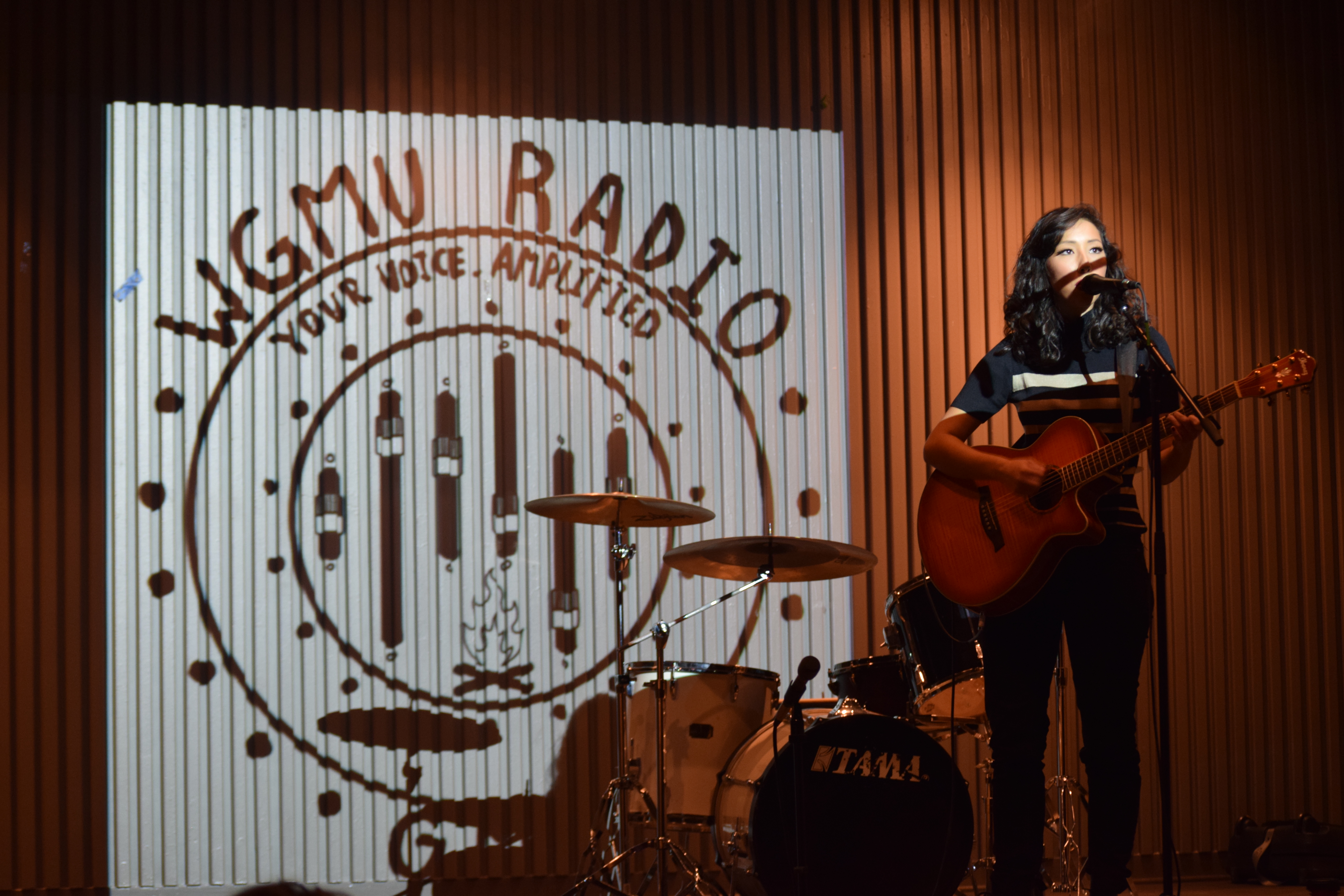 Local talent brought together for the first time

Music festivals are known as exhibitions for artists to come alive with their work, as well as a place where fans soak up everything they love about both their favorite artists and their music. That’s why on Nov. 9, Student Media’s WGMU held their first semi-annual Art and Music Festival in the HUB ballroom. It featured a mix of  local bands and artists in a three hour long event.

Sasha Toophanie, the general manager of WGMU, wanted to start the event in an effort to broaden WGMU. “I’ve never seen us do any event like this before and one of my things when I took over in the spring, this past spring, was that I wanted us to get out there more and to expand and to branch out of our comfort zone,” Toophanie said.

The first performer of the night was graduate student Caroline Weinroth, a member of the Mason band Cinema Hearts. Weinroth, who performed a solo set, sang with a hauntingly beautiful echo and cracked jokes in between songs that she wrote herself, about her double life as a pageant queen and figuring out her then-boyfriend was going to break up with her because he was following his ex on Spotify.

Weinroth founded Cinema Hearts, during her junior year of undergraduate with her brother Erich. Perhaps ironically, Cinema Heart’s music can be found on Spotify, as well as many other streaming platforms.

Weinroth described Cinema Hearts as being inspired by 60s girls groups, surf rock and garage rock. “I always say it’s kind of like if the Ronettes or the Beach Boys played in a garage band and it’s me on electric guitar [and vocals], Erich on bass and then our friend Shane, who is also a Mason graduate student, he’s on drums,” said Weinroth.

In between sets, people had the opportunity to speak with the student artists about their work and even buy their work. 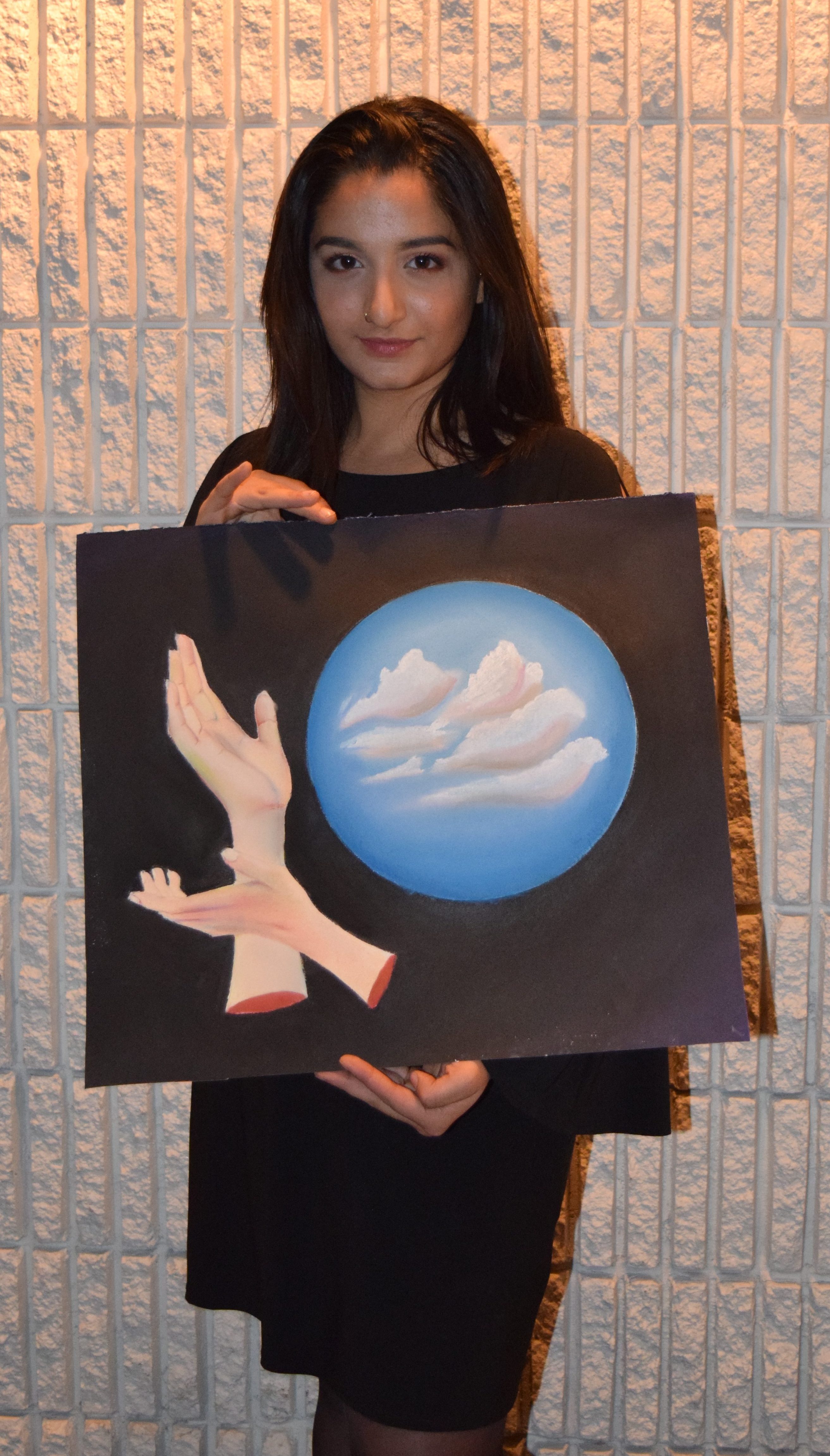 One of these artists was transfer student Yassmin Raiszadeh, a graphic design major who is potentially pursuing a double major in marketing. Raiszadeh first heard about the event through email and grasped the opportunity to share her work with the Mason community.

Of the pieces Raiszadeh had on display, she chose to talk about a piece she had done a week ago that showed two hands beside the Earth on a black background. This piece was representative of consciousness and unconsciousness, and serves as a reminder for her that there is “always a light at the end of the tunnel.”

“It’s kind of like a reminder to me, if I’m in a negative space or I’m being unconscious in terms of …  anger or jealousy or those negative emotions are sparked in me, I have this reminder that consciousness is accessed at any moment in time and it is always with me,” said Raiszadeh. 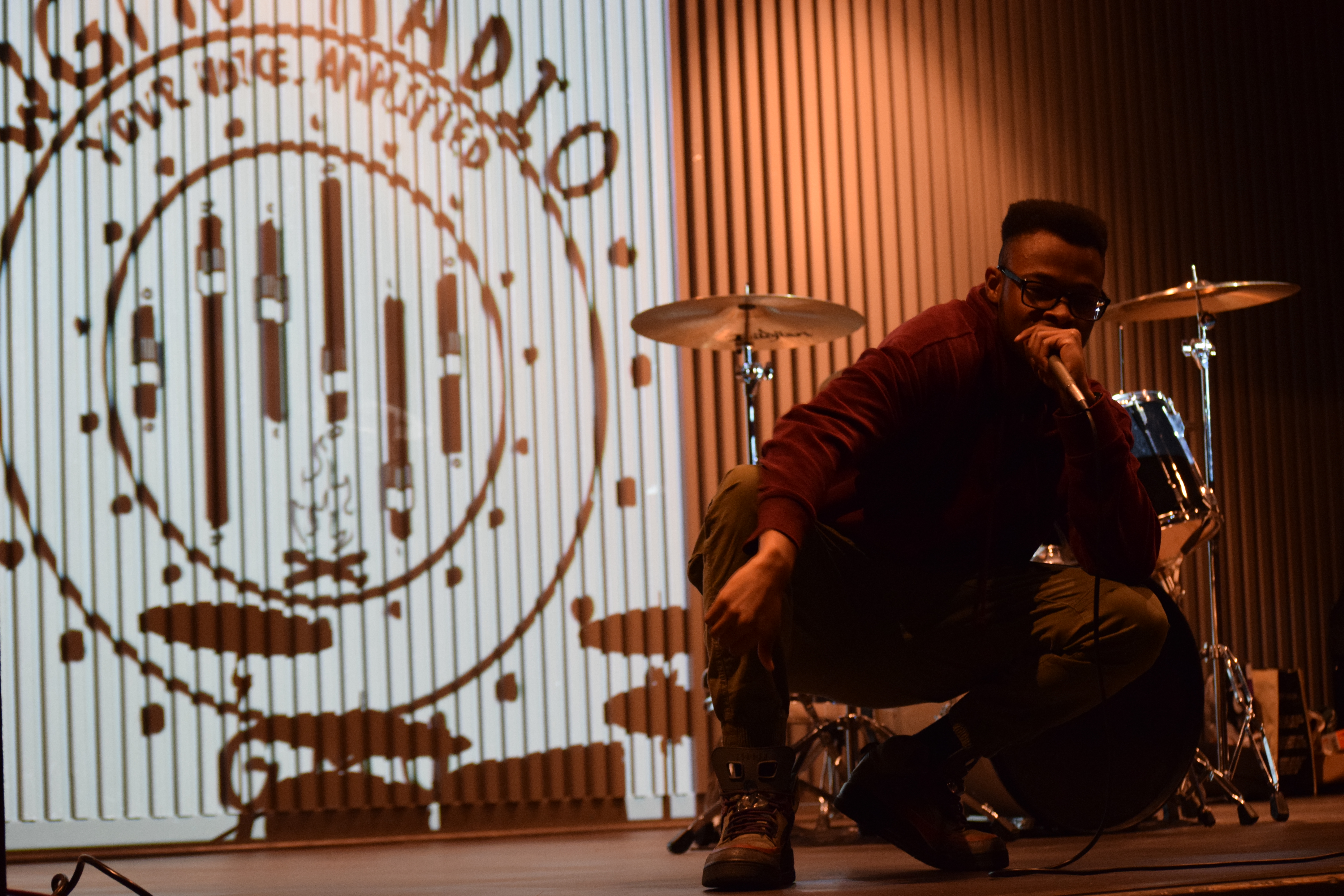 During his set, Mbonu performed his song “Four Wives,” which takes inspiration from Logic’s song, “Nikki.” The song is about substance abuse of alcohol, marijuana and nicotine. “The main one in the hook saying ‘Mary is a Thot’ … in the scheme of the song she’s the original wife and the rest of them, those are the rest of the vices, Mary, Ally and Nikki,” explained Mbonu.

After Mbonu came Powell Not Found, Quick “O” Clock, and Promise Nothing to round out the evening.

Christian Hernandez, the music director of WGMU, hopes that the event raises WGMU in the Mason community. “I think that the ultimate goal is just making WGMU cornerstone of George Mason,” said Hernandez. “It’s something that people [and] new attending students, can be like, ‘Oh, college radio, that sounds super sick, let me go see what’s it’s about’ and it’s event’s like that [that] get our name out there,” Hernandez said.