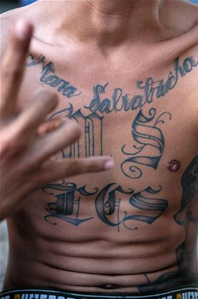 With Attorney General Jeff Sessions stating that the gang Mara Salvatrucha (MS-13) is the “most serious security threat” to the United States today, a question on many Americans’ minds is the danger that the notorious group might pose to them and their families.

In light of these concerns, Mason’s forum on Migration, Homeland Security and Gangs was a timely event. The Schar School of Policy and Government teamed up with the Criminal Investigations and Network Analysis Center (CINA) to host the forum in The Mix on Wednesday, Oct. 24. Two panels were held: the first focused on gangs and migration, the second on gangs and national security.

Regarding the event’s importance, co-host and professor at Mason Guadalupe Correa-Cabrera said, “For the first time, issues of immigration, issues that have to do with Mexico and Central America are at the center of the political agenda in the United States, probably for the first time in the history of this nation.”

The forum included experts on these subjects, including people who have “done work to study and understand the issue of gangs all their lives,” said Correa-Cabrera.

A point that was stressed in both panels is that MS-13 is not the threat that politicians are currently portraying it to be.

Ron Nixon, homeland security correspondent for The New York Times, said, “[Is MS-13] dangerous? Yes. Do they present a threat in the areas where they are? Yes … Are they a transnational drug cartel? No. Do they represent a national security threat to the United States? No.”

By the fall of 2014, law enforcement in Maryland knew about the increased arrivals to the area and that they would need the strategies and resources that they had used successfully a decade prior to combat this threat.

Maria Sacchetti, immigration journalist for The Washington Post, discussed the secrecy of immigration proceedings in America.

“Are MS-13 gang members coming across the border?” Sacchetti said. “Certainly, but [Immigration and Customs Enforcement has its] own statistics for 2014 [that] show that only 5 percent of the surge that year had criminal records. If you would see more of the records, more of what they are doing, you could understand that and examine it, and we could better understand what the government is doing.”

Sacchetti also discussed secret arrests and how difficult immigration court can be to navigate.

“American citizens have been arrested secretly by immigration,” Sacchetti said. “People have died in detention, often without a hearing or a lawyer.”

Sacchetti referred to the case of Irene Bamenga, a French national who died in jail when the court withheld her vital heart medicine in June 2011.

On each of the forum’s panels, several members had ideas for how to start solving these complex issues.

“In Central America, we need to continue to address the conditions that are causing people to flee,” said Adam Isaacson, director for Defense Oversight at the Washington Office on Latin America (WOLA). “Nobody wants to leave their home.”

The long-term solutions that Isaacson recommended were for Central American governments to cut all ties with organized crime, and for aid programs to remain intact and funded.

Journalist and author Óscar Martínez discussed falsehoods about MS-13 that the U.S. perpetuates. Among them were the way that MS-13 is organized and the majority of illegal activity that the gang is involved in. Martínez also asserted that deportation hinders, instead of helps, to solve this problem.

“You know that we journalists are very well[-known] for causing problems, and not so well with (sic) solving them,” Martínez said in Spanish through an English-speaking translator.

Panelists also discussed how to get correct information and statistics to the public, a highly difficult challenge given the emotions that debating this topic often brings.

“The demographics of the population of people who are being apprehended and who are coming across the border [have] vastly changed in a way that almost makes … [Department of Homeland Security] enforcement … [not] ineffective, but it really presents challenges, because you’re dealing primarily with families now,” Nixon said.

“I think that when you do have those moments, like the family-separation issue, [they] did bring people together and gave people the opportunity to talk.”

Sacchetti added, “I honestly think you should just let the people see it for themselves … for [the] American public to really understand it, I think you have to see it.”

A conference about what is happening on the local, grassroots level to prevent gang violence is currently in development for next year.

Nine Reasons to Watch the Best Game in America