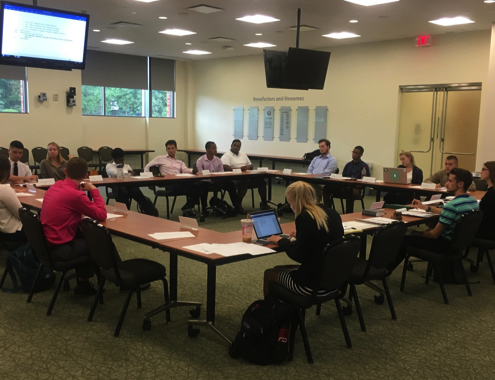 On Oct. 18, the 39th Student Senate met for the 10th time in Merten Hall. The senate passed legislation on four points. Two pieces of legislation were referred to the Administrative and Financial Affairs Committee, another was referred to the chair of university services.

After the election, Student Body President Bekah Pettine spoke about topics such as recent events, the Board of Visitors (BOV) and the new Advance Program with Northern Virginia Community College (NOVA).

With midterms in full swing, Pettine also emphasized the importance of mental health. Students need to get proper rest, she said, so that they can manage their stress and still succeed.

She went on to say that the BOV covered an abundance of information, still being compiled, about university funding and decision-making.

Additionally, President Pettine and Vice President Erik Truong have been meeting with NOVA’s president and vice president to collaborate on the Advance Program. The program enables students from NOVA to transfer their credits to Mason easily and smooths out their transition.

R#10 restricts the use of conflict minerals such as tin and cobalt, which are mined in countries such as the Democratic Republic of the Congo and contribute to human-rights violations. R#11 came in response to anti-Semitic vandalism in the community.

Spike In Sexual Assault And Other Title IX Violations