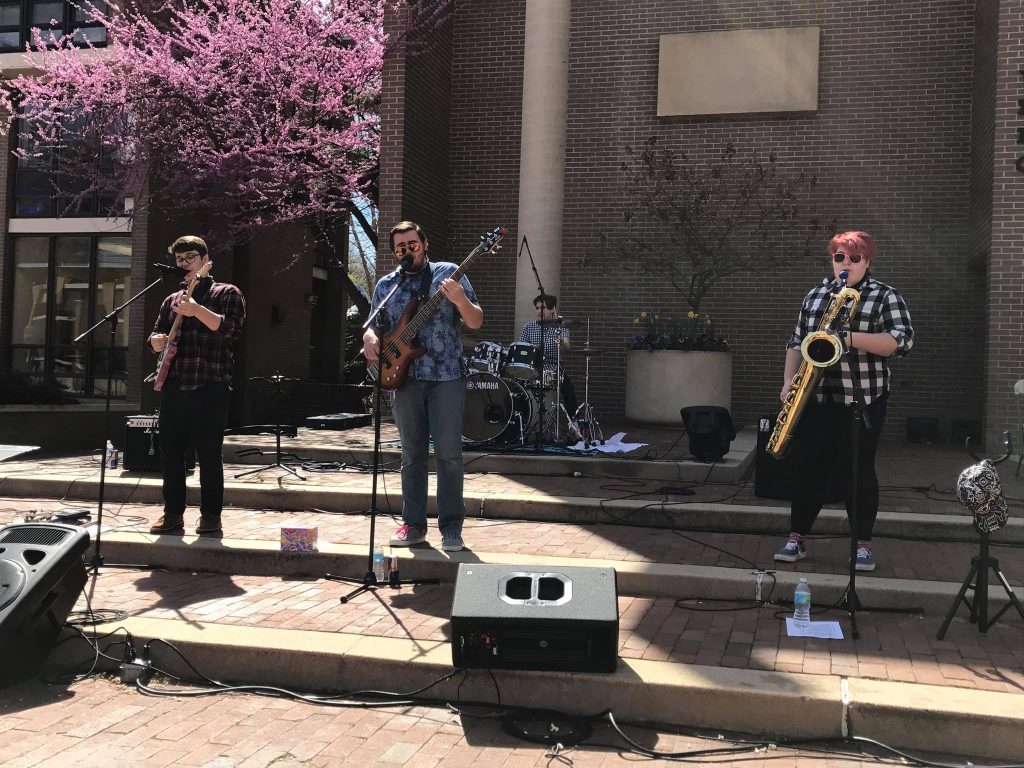 Most high school bands don’t manage to survive past graduation, but Catchin’ Toads has beat the odds.

The group, which started in 2013, includes siblings Kamron Rose on bass guitar and vocals and Julia Rose on baritone saxophone, Zach Schwartz on guitar and vocals and Jeremy Nachison on drums. Since releasing their debut album “Thinkin’ About Space” in August and playing at multiple venues in the area, they have become one of Mason’s most well-known student bands.

Three of the founding members, Schwartz and the Roses, are still members of the band today.

Nachison was added in 2016, when their old drummer left due to creative differences. At the time, Nachison was about to enter eighth grade.

“They didn’t even call me,” Nachison said about him joining. “I didn’t even have a phone yet … They called my dad, and asked if I wanted to be in a band. I was like, ‘Yeah, dad, that sounds cool.’”

“I [don’t] play drums so people would be like, ‘Wow, what a great drummer,’”  Nachison said. “I just play drums so the music sounds good and feels good.”

The band is mainly a blues and rock band, influenced by artists such as Jimi Hendrix, Stevie Wonder and Stevie Ray Vaughan. However, they do not feel constrained to making music that are in just those genres.

“Though we get inspiration from them … over time, it’s become how we can take inspiration from these people and kind of make it our own,” Julia said. Nachison added, “We all come from different places musically, so it doesn’t really make sense for us to converge on this one genre when we can just be ourselves.”

The diversity of sounds can be seen on “Thinkin’ About Space,” where the 10-track album bounces from the soulful tune “Summer’s Gone” to the jazzy bop “Gamble.” The album was recorded at Bias Studios, where artists such as the Dave Matthews Band recorded their award-winning albums.

“It was super easy to record it there,” Nachison said. “Everybody there knew what they were doing … We were satisfied.”

No member of the band has sole control in creating their music and lyrics. Each member has a part.

“It’s just we all find our own spot, and we all give our own input, and [are] like ‘What about this? Try that, don’t do that,’” Julia said about writing their music. She continued, “We’re just gonna keep making music and kinda go from there.”

In the future, the band hopes to have more people hear and enjoy their sound. Julia said, “The dream is to be in everyone’s iTunes libraries … and they like us.”

“Thinkin’ About Space” is available now on Spotify, iTunes and wherever else music is digitally sold.