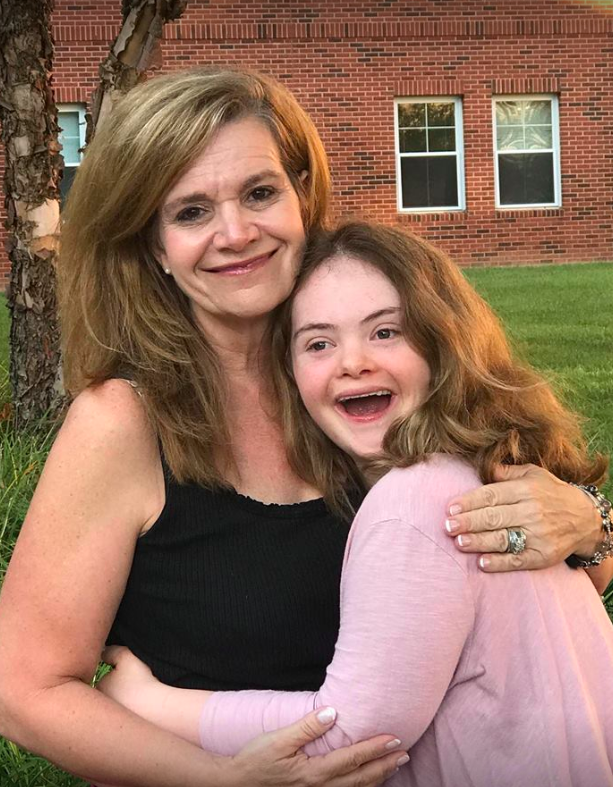 Mason LIFE student gets dropped from every sorority on campus

AnnCatherine “AC” Heigl is currently a D1 cheerleader at Mason and described as approachable and kind. She was a varsity cheerleader, three-time homecoming princess, volunteer and practicing cook before she graduated high school, yet every sorority available on Mason’s campus dropped her. What happened?

AC is a sophomore in the Mason LIFE program, which is number one in the state of Virginia for programs for students with disabilities, according to an article from Know Different. She has down syndrome and became the first D1 cheerleader with an intellectual disability, according to her sister, Lillie Heigl. On Sunday, Sept. 16, AC found out she was released from every sorority.

This all began after AC’s sister, Lillie, heard the news of her sister being dropped from Mason’s sororities, and took to Twitter with a screenshot from an email Lillie sent to Panhellenic that expressed the disappointment AC and the Heigl family felt. The story went viral, receiving significant attention on a national scale.

Even though Mason’s Panhellenic has now updated their bylaws to allow women with intellectual disabilities to rush, seven out of the eight chapters at Mason have not adapted to the new rule, according to an anonymous sorority member at Mason, who chose to remain under the pseudonym Molly.

Some students in sororities at Mason are pointing to the word “matriculated,” which means enrolled at a college or university, in local chapters’ rules as the reason why AC was released, rather than purposeful discrimination.

Words like “matriculated” and “degree-seeking” in sorority requirements have only allowed women to rush that participate in courses where they earn grades that can affect their GPAs. When applicants apply to rush Panhellenic, they are required to fill out a form that includes their GPA, but as Mason LIFE students technically do not earn a degree or have GPAs, they are not considered “degree-seeking.”

Last year Madison Essig, a LIFE student and senator in Student Government, successfully encouraged Panhellenic to change their bylaws and is now a member of Gamma Phi Beta.

Molly also emailed Fourth Estate and pointed to chapter bylaws requiring matriculation as the main reason that AC was released. GetConnected did have these bylaws listed for sorority chapters Molly sent us.

“While searching on GetConnected, I found copies of 7/8 chapters governing documents (apart from Pi Beta Phi),” Molly said. “6/8 of those chapters (apart from Alpha Phi) bylaws state that a woman must be matriculated, degree-seeking or have a GPA.”

Yet, Lillie says chapters should have been more active in addressing this issue.

“I’m still disappointed in those chapters,” Lillie said. “Their response was, ‘Oh, [AC is] not getting a degree,’ or ‘[AC is] not fully matriculated, guess she doesn’t get a bid.’ Why wasn’t the answer to that problem challenging it instead of just accepting it and being complicit?”

The distinction between Panhellenic and local chapters can be confusing to those who are not aware of Greek Life.

“[Panhellenic refers to] the governing body of all sororities,” said Molly. “Panhellenic execs and [Associate Director of Student Involvement and Fraternity and Sorority Life]  Phil McDaniel do not have a say over what rules each individual chapter has, nor do they have a say over national/international mandates that come down from each organization,”

Sorority recruitment is a step-by-step process. A few sorority members discussed the process with Fourth Estate.

“It’s an interview mutual selection process [where] you dress up each day and then they talk to get to know you, [you rate them and] they rate you,” another anonymous member said. “It is common for some girls to drop and not get a bid. [The sororities] rate you on connection, personality and common values they have.”

Although many say the process is a “mutual selection process” between the PNM’s and the chapters, AC’s release from all of Mason’s sororities potentially challenges that. Lillie Heigl claims this was discrimination, even if it was not intentional.

Other students have also weighed in on the issue on social media. Some express the sentiment that not everyone is automatically entitled to acceptance in a sorority.

“Having a disability doesn’t entitle you to Greek life. Plenty of people don’t get accepted into organizations for various reasons so it’s not even fair to just say it’s because she has down syndrome,” reddit user u/oneronin said. “That being said, I can understand not picking someone with a disability because they introduce liabilities and probably can’t participate in a lot of the organization’s activities.”

Lillie says she agrees that sometimes people with disabilities may be released for other reasons, like not connecting with the other members.

The viral tweet which Lillie wrote created an outburst response from the public with diverse responses, including from the Mason community.

“I’m a sister of Pi Beta Phi, initiated into the VA Iota (GMU) chapter as a freshman,” Twitter user Claire McTiernan (snarkyginger96) said. “I also have quadriplegic cerebral palsy and am a disability rights advocate. I am so sorry to hear what happened to your sister.”

“God bless you and your family (sic),”

Some even targeted Lillie’s tweet as a way for her to receive attention.

“I think this is less about your concern for her and more about your narcissism, hence why you took it public for likes and retweets,” @notyetmytime said.

Although the majority of the responses the Heigl family received were positive, there are some that agreed with the sororities’ decision to release AC.

“Possibly a good thing as the majority of Greek charter houses on college campuses involve booze, parties and assaults,” @stormclouds11 said. “They were probably looking out for her interests and their desire not to be responsible at the events.”

In regard to this argument about liability, Lillie disagrees.

“If chapters are making decisions about who should and should not be in the chapter based on their own perceptions of what those people are capable of, I think that’s a mistake,” Lillie said. “Ann Catherine wouldn’t have gone through recruitment if she didn’t think she was capable of it,”

In fact, she emphasized the value AC would have brought to a sorority.

“Growing up, there was something special that my sister taught people on her tennis team and that cheer with her,” Lillie said. “Sometimes that’s her work ethic, because she has to work ten times harder than everyone else to receive the same results. People learn from being around her and she’s a wonderful person.”

“AC is a wonderful young woman with a lot of determination and passion for school and cheer,” Williams said. “When you first meet her, she is shy but once she gets to know you, she expresses herself through smiles and jokes. AC contributes passion, a sense of humor, and all joy. She loves cheer and works hard for her team.”

Additionally, some believe the negative reactions against the sororities was excessive.

“It’s blown out of proportion,” an anonymous sorority member said. “I feel terrible for her and her being released [meant she was] leaving. It made me so sad to hear [the] experience made her feel that way, everyone should feel welcome and [should] not leave like that.”

There has also been some dispute over numbers. In her original email and tweet, Lillie expressed disbelief that there was not a spot open for AC.

“I struggle to believe that when only 288 women went through recruitment at GMU, and you have eight chapters, there wasn’t a place for my sister in a single one,” she wrote.

One of the anonymous sources that spoke with Fourth Estate provided what they claim to be this year’s sorority statistics. 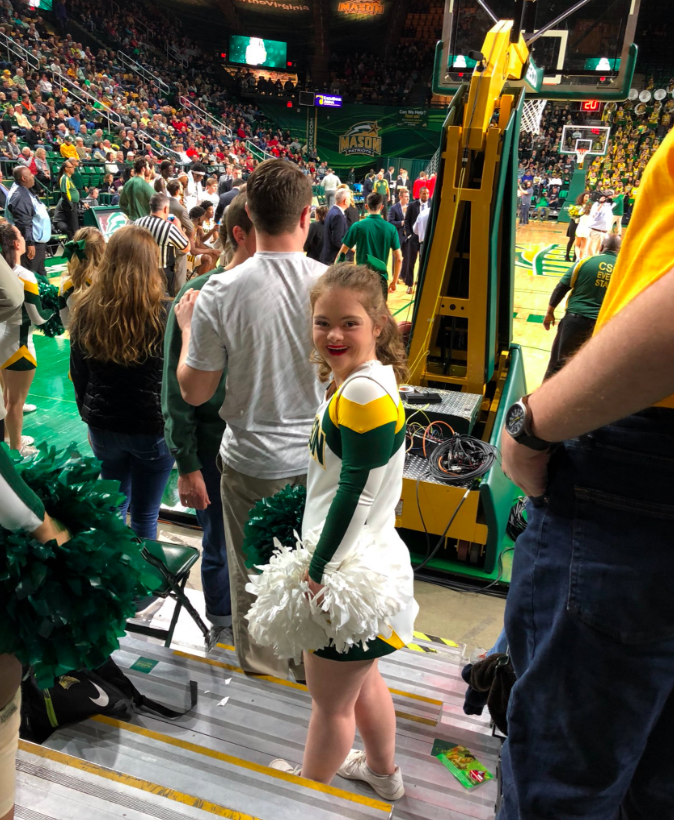 “This year, 296 women went through recruitment. 216 were matched on Sunday night … a few after that point chose not to accept bids, leaving the number of women matched to 206,” they claimed. “The sorority total is based off of the organizations total number of members …This year, total has been set to the average chapter size of 125.”

However, the source did not clarify how many of the 80 women who were not initially matched chose to drop themselves out of recruitment or how many were released from the process by Panhellenic.

Another sorority member believes the situation could have been handled differently, instead of through viral tweet and articles.

“I think something good could come out of this, but such a negative light has been shined on [Mason sororities],” she said. “If [Lillie] had gone about this differently, we would be having a different discussion,” she said.

“I can’t help but wonder why she chose to make an example out of GMU instead of her own alma mater,” she stated. “She is correct in saying we need to fix this, but this is not a Mason issue, this is a National Panhellenic issue and creating an on-campus witch hunt is not the way to fix the larger issue at hand.”

Lillie claimed her intention was the opposite.

“I’m not trying to set fire to all of George Mason Greek life,” Lillie responded.

“I loved my experience in my chapter. That doesn’t mean it was perfect, but I had a wonderful experience myself. I’m not trying to get rid of Greek life; I’m trying to challenge it to be better.”

Lillie says her own alma mater, University of Missouri, did not even have a program similar to Mason LIFE.

“I was pretty critical even during my undergrad time of barriers in Greek Life,” Lillie said. “But honestly, my university wasn’t even a problem for people with intellectual disabilities because we don’t even have a program like Mason LIFE. So, a discussion about a woman with down syndrome or a woman with autism, that would never happen at my alma mater because we don’t have anything.”

Still, Lillie emphasizes that Greek Life and Panhellenic did many things well.

“To overall Greek life’s credit and Panhellenic, they did a lot of things ahead of time to be proactive,” Lillie said. “They were careful about which *Rho Gammas she was placed with and accommodating with her cheer schedule. Clearly, it wasn’t in their control, it was down to individual chapters,”

Mason’s Office of Disability Services will continue to fight for the equal treatment and access for their students, as well as strive to educate the Mason community about disabilities.

“Mason is proud of its reputation as an inclusive community where we can all thrive … Like most universities, student organizations at Mason, including the Panhellenic Council sororities, manage their own recruitment and determine their own membership.”

All sororities in Panhellenic were contacted for comment, though only two responded.

Alpha Xi Delta released a statement on their website in regards to AC being dropped from recruitment, “Discriminating against individuals on the basis of a disability is contradictory to Alpha Xi Delta’s mission and values … Alpha Xi Delta Fraternity believes it is inherent in our principles not to discriminate on the basis of religion, race, national origin, disability, sexual orientation, veteran status, citizenship, or age.”

Katherine Quigley, the chapter president of Pi Beta Phi, responded to Fourth Estate’s request for comment through an email. “Pi Beta Phi membership criteria does include an expectation, among other requirements, that the candidate for membership be a matriculated and full time student as defined by the college or university. Out of respect for all of the women who participated in recruitment we are unable to discuss why or why not a specific candidate may have been issued an invitation to Pi Beta Phi.”

Both Office of Diversity, Inclusion, and Multicultural Education and Phil McDaniel declined to comment.