Two hundred thirty-five miles separate Mount Vernon, New York, and Fairfax, so having a familiar face around is sure to help freshman guard Jason Douglas-Stanley while he transitions to life in college.

“In high school, we were a problem together,” said Greg Calixte, who played three years with Douglas-Stanley. The  two developed a chemistry that is sure to translate onto the court for the Patriots. “We always had that connection … I’d always find him when I was getting double-teamed.”

“It’s a nice feeling knowing that we’re going to be able to bring our chemistry to the collegiate level,” said Douglas-Stanley. “Having him as a backup, letting me know where to go, things I can and can’t do, it’s good to have. He’s a good resource, since I knew him for so long back home.”
Douglas-Stanley averaged 28.7 points per game and shot 43.7 percent from three-point land as a senior at Mount Vernon, leading the Knights to a sectional championship and setting the program’s single-game scoring record with a 50-point performance against Wadleigh back in February.

“He’s got a unique talent,” said assistant coach Dane Fischer. “It starts with his ability to score from behind the three-point line, and it’s something that can change the dynamic of a team if you’ve got one guy that you just can’t leave out there.”

However, possessing the skill to shoot from outside was not the sole reason he was recruited by the Patriots. 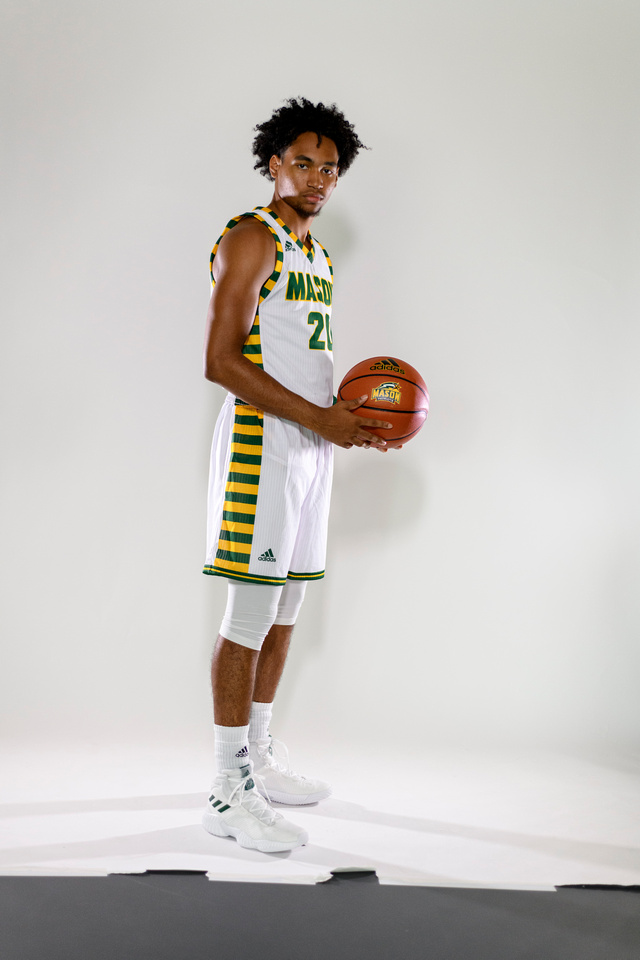 “What’s impressed us about him is that as much of a reputation that he has as a great shooter and a great scorer, he’s got a lot more basketball game than just that,” said Fischer. “He’s a really tough kid. He’s competitive; he really works on the defensive end and wants to improve in all the areas of his game, and that’s been really fun to see in just the short time that he’s been here.”

Those achievements cemented a place for Douglas-Stanley in Mount Vernon basketball lore, whose notable alumni include NBA champions Gus Williams and Rodney McCray, as well as former NBA Sixth Man of the Year Award-winner Ben Gordon.

“With Mount Vernon … you want to leave a good legacy,” said Douglas-Stanley. “You want to make sure that the history stays with you there, so those accolades were important to leaving a legacy for me.”

Growing up in Mount Vernon, Douglas-Stanley was always active and went to a variety of summer camps for different sports, but basketball really caught his eye once his dad came into the picture. He saw Jason’s passion for the game and worked tirelessly with him during his childhood through workouts and playing at any time of the day.

Eighth grade was a pivotal year for Douglas-Stanley. He came to the Junior Knights program with few expectations from the people around him, which added more motivation for the confident guard to make a name for himself.

“Going into high school, nobody expected me to be the player that I was,” Douglas-Stanley admits. “Everybody was talking about the other players, and I was in the backdrop a little bit, but I ended up outworking everybody that they said would be better than me back home.”

His hard work and determination earned him an offer from the NCAA Tournament frequenter Iona, as well as options at Old Dominion and Drexel, but he wanted to go somewhere where he could have an instant impact against quality competition, and Mason provided him just that.

“I wanted a school that felt we were on the same page, where I could come in and have an impact, and they felt that this was something that I could do here,” said Douglas-Stanley. “I know I can score … and get to where I want to get. They believed in me, so that’s what I really liked.”

Now that he’s on campus, he’s focused on improving his game in order to become a well-rounded player, from being able to put the ball on the floor to getting his defense to the college level.

“I’m still working on my ball handling. I want to make sure that, even though I’m still a 6’2” guard, that I can definitely play the point guard position because I feel that I have good vision and I can see the floor very well,” said Douglas-Stanley.

With how easy it is to burn out during freshman year, having a hobby off the court provides much-needed down time for Douglas-Stanley and his teammates to relax. One of those activities is shopping, which he and senior guard Logan Samuels both share a passion for.

“[T]he big thing [is] high expectations to win. I don’t want to be another player who can just play and score. I want to come to a program and help the team win,” he asserts. “We feel that no matter what, inside or outside of our league, that we want to be competitors in everything that we do.”

After the Patriots finished a program-best fifth in the A-10 standings last season, Douglas-Stanley is aware of the expectations placed on the team to finish in the top four and return to the NCAA Tournament for the first time since 2011.

This upcoming season is not short on competition, as the Patriots have notable non-conference games against Cincinnati, Kansas State, Vermont and William & Mary to go along with the grueling Atlantic 10 competition.

Are Yemenis in Jeju Fake Refugees?

Why are you still a Catholic?