As the clock ticks down the seconds left, the game starts to come to a close. While it might end on the court, it’s only just the beginning. What is “it”? Not the WNBA Finals, but rather something more sentimental.

This something is the emotion felt in EagleBank Arena, the arena both Mason and the Washington Mystics call their home, even if it was only for one game of the Mystics’ most important series in their franchise history.

It did not take long before EagleBank Arena added more to its history. For the first time, Mason hosted a WNBA game, which just so happened to be Game 3 of the WNBA Finals. 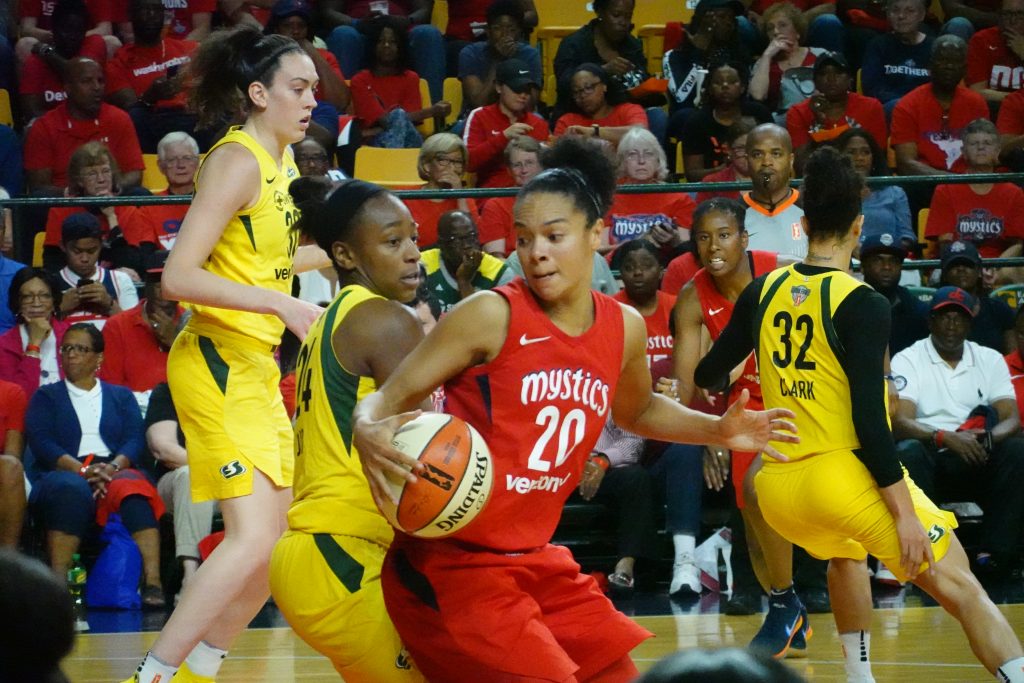 Furthermore, Courtney Paris, a center for the Seattle Storm, suited up on Wednesday. If that name sounds familiar, it’s because her NCAA single-season rebounding record was broken by Mason center, Natalie Butler, last season on this very court.

As the Mystics took on the Storm in the WNBA Finals at EagleBank Arena, they didn’t win their first title but rather gained valuable playoff experience that will help them next postseason and the next time they make it to the Finals.

The Mystics came to Fairfax after advancing to their first WNBA Finals in franchise history, after tying the franchise record for regular-season wins with 22.

Mystics stars, Elena Delle Donne and Kristi Toliver struggled to find their groove in this series. Delle Donne had to deal with a bone bruise on her left knee, about which she said “I wasn’t able to practice a lot, I was trying to figure out my go-to moves as games were going on… I’m a very left-footed player. I like to push off one leg. Floaters, stepbacks and all that off my left leg. Just trying to find a different way to get it done. But I felt more and more comfortable as we went on.”

However, Delle Donne was not the only player affected by an injury. During the game on Wednesday, LaToya Sanders went to dive to keep a ball inbounds in the corner but ended up falling on the concrete floor, badly injuring her ankle. She did not return to the game. The Mystics coach commented on how it impacted them, saying “I mean, you know, you’re taking a starter out of the lineup who was playing pretty well, had a good start to the second half. She turned her ankle pretty good stepping off the edge of the floor going for the loose ball.”

Home court advantage was not really present throughout the postseason for the Mystics. While their main court at Capital One Arena was being renovated, they were temporarily moved to the Charles E. Smith Center on the campus of George Washington University. Being subjected to these arena changes at the beginning of their postseason and having to move again to Eagle Bank Arena did not help the Mystics.

During the post-game press conference, Elena Delle Donne spoke on how her team’s season and how they compare to other teams saying, “Next year there’s going to be teams that were super young this year that grew so much throughout the season, and so many teams were knocking on that door just to even get into Playoffs. It’s going to be grueling. Even more grueling next year than this year. So we know how great the teams are and how much better we have to be. We’re not just going to be satisfied that we got here this season. We know we’ve got to improve because everybody else is.”

Going into Game 3, the Seattle Storm were 0-7 on the road in the postseason, their last playoff road win came in 2010 to sweep the Atlanta Dream to win their second championship. The Mystics were also going up against history, every team in the Finals since 2005 to have started 0-2 has been swept by their opponent. 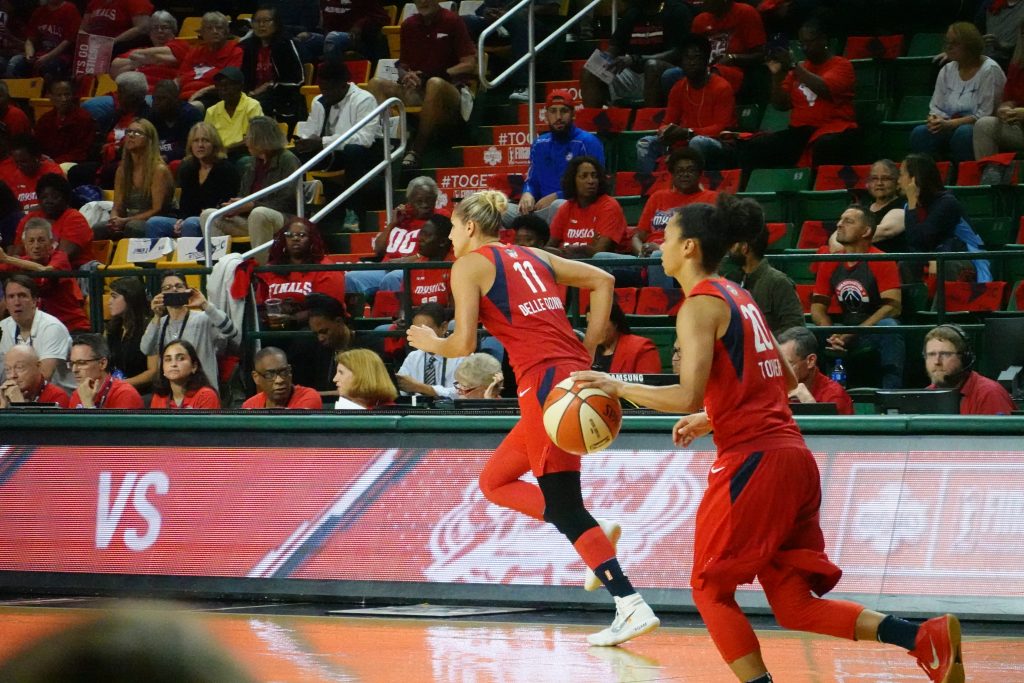 While the Mystics and other teams failed to win the championship this year, the Seattle Storm did not seem phased at any point during this series. However, the Storm almost didn’t make it to DC. The Storm led their series 2-0 with the Phoenix Mercury before the series moved to Phoenix. The Mercury won Game 3, 86-66, and despite having eleven assists, Seattle’s starting point guard Sue Bird failed to score a point.

Bird was off to a much better start in Game 4, but during the second quarter teammate, Breanna Stewart inadvertently elbowed her in the face. Despite traveling with three masks, Bird wasn’t able to re-enter the game as her nose wouldn’t stop bleeding.

With just under six minutes to go in Game 5 of the Semifinals, the Phoenix Mercury led 73-69. That was until Bird decided she wanted to reach her third Finals. With 5:48 to go, Bird hit a three to pull the Storm within one. She would go on to score 14 points, going 4-5 from behind the arc before the end of the game. The Storm went on to win by 10 and advance to their third Finals in franchise history.

Led by stars like Stewart and Bird, the Seattle Storm came together and won this series.

In addition to her first WNBA Championship, Stewart won the regular season MVP and Finals MVP and is currently undefeated in WNBA Finals games.

Bird commented on Stewart’s accomplishments saying, “I think coming into this season, she really just changed her mindset. She had goals, specific goals, and yeah, she had some individual ones, but I think she knew those individual goals, winning MVP, being dominant or as dominant as possible, that was going to impact the team positively and probably lead us to where we are now. So I think it just speaks to Stewie. Obviously the kid knows how to win.”

Bird earned her third championship win (2004, 2010, 2018), adding to her extensive list of accolades over her seventeen years in the league most notably, 11 WNBA All-Star selections, and four Olympic gold medals. 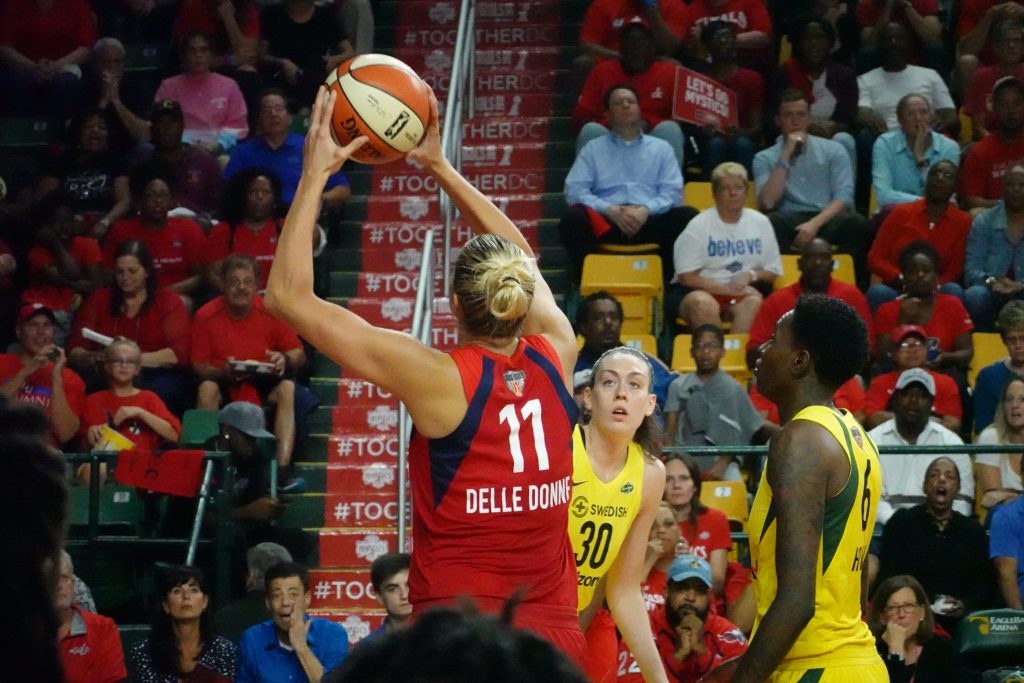 Stewart continued, “On-the-court stuff, off-the-court stuff… her basketball IQ is like no other, but the fact that what she does for her body… I’ve kind of just tried to mimic that… really focusing in on how can I make sure that I’m prepared every single day, whether it’s practice or games or that type of thing, and now doing that, it makes you want to win with her….it’s easy to say that. It’s not as easy to do it and do it at the level that she was at.”

Stewart and other players have inspired many communities to be involved and engage more with the WNBA and women’s basketball. The Mason Women’s Basketball team had a chance to meet some of the players from both teams on Wednesday morning at the shoot-around and while the WNBA Finals may be over, the emotions brought to the arena and pride that came out of them will never be forgotten.