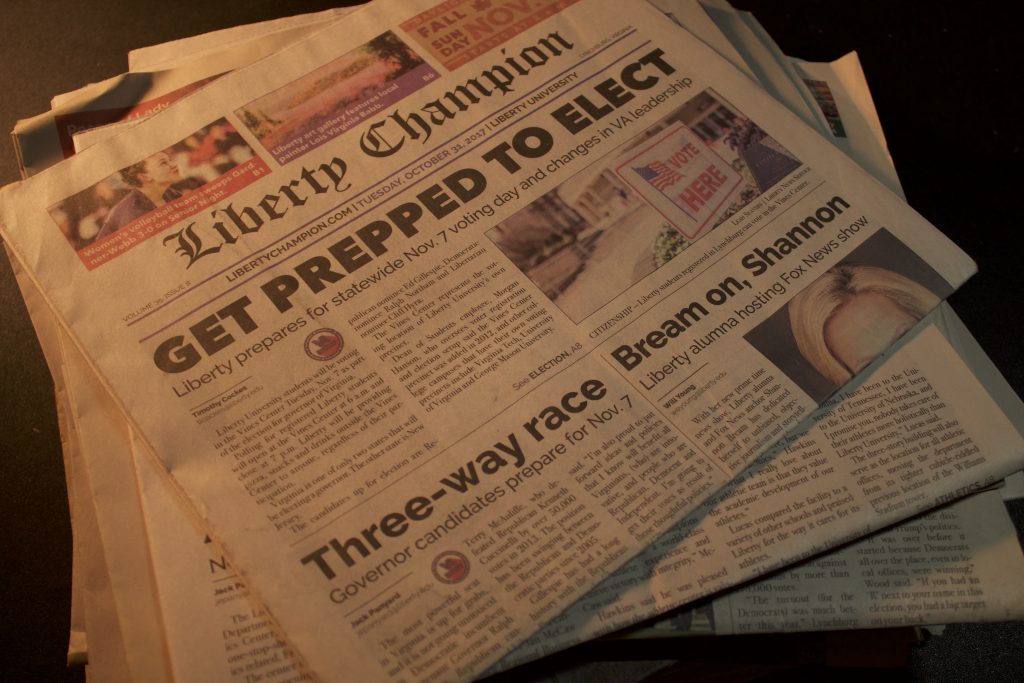 An Editorial from Liberty University

Editor’s Note: Jack Panyard is a special guest columnist from Liberty University. We invited him to write an editorial on his experience with the school’s newspaper, the Liberty Champion, after it was reported by WORLD Magazine that the paper had been suddenly reorganized by the LU administration. By inviting Jack, we hope to encourage awareness and support in regard to student press freedom across the state and the country.

“We’re doing away with the editor-in-chief position. … Bottom line is your services won’t be needed.”

“Fired is not the right word. We’re not firing anybody, we’re just not putting you in that position.”

Thus ended my tumultuous, year-and-a-half long stint with Liberty University’s student “newspaper,” the Liberty Champion. Frustrated, baffled and heartbroken, I realized I was out of a work space, a new position as editor-in-chief of the publication and a $3,000 scholarship for the upcoming semester.

This all stemmed from truth telling and a desire to publish a newspaper that would challenge and inform students. As a junior, I had served on the paper of around 16 staff members as the news editor. Erin Covey, a fellow journalist and close friend was the assistant news editor and received the same fate.

We had spent the year fulfilling our duties as editors by publishing the standard fare Liberty expected of us, but we pursued difficult stories that the administration did not appreciate.

We would write stories about how our school’s student government association was debating legislation on allowing cursing, tobacco usage and drinking off campus (a big taboo in the Christian Baptist community). Stories on liberal pastors who came to pray for Liberty being banned from campus and threatened with jail time. Stories on how girls pregnant out of wedlock were being forced to move off campus within 48 hours of realizing they are expecting, until the administration realized there were major legal issues and changed their tone.

The censorship was relentless. We had to send almost all our articles out to various members of the Liberty administration, many of who butchered our writers’ pieces. It was frustrating. There were many long days where our paper advisor would make us wait for edits to articles when we were far past deadline, and if they did not respond our advisor would kill the piece.

And it was not just the news section who were censored; the opinion and feature section regularly received comments or corrections for articles.

This is not to say my experience in my school paper was bad overall. I loved my job. Some of my best friends worked in that office with me, and the stressful times were usually full of laughter, comradery and the collective feeling of pressure which created a sense of solidarity I had never felt before.

But in the end, after Erin went to the press in response to being censored by our school’s president, Jerry Falwell Jr., the school decided it needed to act.

Our incoming team was interrogated, lectured and threatened by the heads of our department. Ultimately, Erin and I were fired two weeks before the end of the school year and the paper received three new levels of oversight from the administration.

They were in their legal right to do so. The Champion is owned and published by the university, but this is not a matter of can or can’t. It is a moral issue – should or shouldn’t.

This experience was awful but an enormous growing opportunity. Through it my eyes were opened to how many student-run news sources are censored.

Beyond many of the popular and often bizarre legal cases (BONG HITS 4 JESUS anyone?) many students are being muffled. The Student Press Coalition reported from their group of Council for Christian Colleges & Universities that 76 percent of the publications have “faced pressure from university personnel to change, edit or remove an article after it’s been published in print or online.”

Why are so many universities afraid of the news?

It is because despite what educational institutions may think, journalism is not public relations.

The fact that so many student publications are facing backlash is a positive thing. This means real journalism is being cultivated, even if a publisher tries to muffle it.

I could quote any number of scholars or public figures on the importance of journalism or recite statistics on what happens to communities who do not have solid journalistic coverage, but it would not change anything.

A campus needs an unbiased information source to start discussions about hard topics. Students need to want their student newspaper. College publications should not be written off as a PR rag for their college or school but valued as a platform for discussion and debate.

I took the story of the Champion censorship to WORLD Magazine not to try to put a dent in my school, but to inform students of what the administration’s agenda was.

The dean of Liberty told the new staff of the Champion “to keep the LU reputation and the image as it is,” but that is not the point.

The point is to challenge the reputation and strengthen the student body through doing so.