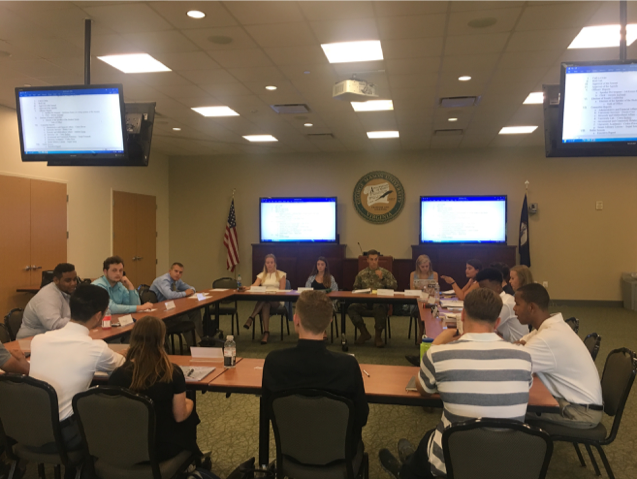 When asked about the future as the new Speaker Genoese-Zerbi said, “I hope to increase the cohesion of the institution as well as make everyone aware of the rules which govern us and make sure that everyone knows how to do things that they need to do,” although, “We’ve had problems in the past where speakers didn’t understand the rules and so senators got confused which slowed down our meetings, so I hope to promote efficiency as well as cohesion in the institution.”

He goes on to mention that he would like to see Mason’s senate successfully achieve its goals and advocate on behalf of the student body which would result in changing the entire institution for the better.

Joseph Fernando, Chair of the Government and Community Relations Committee, drafted a resolution to support the 9/11 day of service which was approved by Mason’s student senate. This entails that various community service projects will be undertaken to honor the memory of those who lost their lives in the September 11th attacks.

Joseph said the following, “This is a traditional thing we do every year. It’s an annual GCR event that we sponsor provided our support. We need a resolution first to provide allocation funds to support the 9/11 rescue service. We just want to express our support and continue the tradition here.”

Additionally, Bill #1 was proposed which allocates funds for the 9/11 Day of Service. The bill was sent to the financial affairs committee for further evaluation and the results will be returned within a week.

Amanda Luna, Andrew Naioti and Sancia Celestin were all approved as Undersecretary for Civic Engagement Election and Disputes Commission Commissioner, and member of the Student Funding Board respectively.

Bekah Pettine, Student Body President, went on to discuss the schedule of Cabinet Meetings, Board of Visitor meetings and the Resident Student Organization summit. Furthermore, she announced that the Secretary for Academic Affairs resigned and the position will be filled within the coming weeks.

The Last Ship out of Debt: Scholarships

Upperclassmen Look Back On Their First Day At Mason