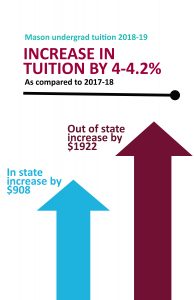 According to the 2018-2019 Budget Executive Summary by the Office of Budget and Planning at Mason, the average increase in tuition for other Virginia public colleges was $469, as compared to Mason’s increase of $624. Similarly, the average Virginia public college increased tuition by 3.8 percent, versus Mason’s increase in tuition by 5.5 percent. Still, according to the Center on Budget and Policy Priorities, the average tuition for 2018-19 was $12,937, whereas Mason’s tuition for the 2018 fiscal year is $11,924.

Not all students knew about the change in tuition.

“I was not aware of any tuition increase and I wish I had been because part of the reason I chose GMU was [because] of the decent tuition cost compared to other colleges,” sophomore Jordan Hudson said. “I’m now going to have to work even harder after graduation in order to cover the cost for the new tuition.”

Other students are not as upset.

“If it was $5000 or a different amount, then I’d be upset,” freshman Christopher Brewer said.

In their executive summary, the Office of Budget and Planning point to a decrease in state support. Indeed, the Center on Budget and Policy Priorities, a nonpartisan think tank, reports that Virginia ranks among the worst in providing state support for college students. This year, about half of the 12 states they studied increased funding in 2018, but Virginia was among the states which decreased funding even further, according to watchdog.org.

The Office of Budget and Planning claim in their executive summary that tuition has only been increased “after other revenue opportunities…  have been incorporated into the plan.

However, according to an article on watchdog.org, President Ángel Cabrera is “the highest-earning president” out of all of Virginia’s public institutions, with “a cool base salary of $531,400.”

Additionally, a transcript for the Board of Visitors meeting on May 2018 shows there are six investigations of fraud, waste and abuse in progress. Before the meeting, there was one finished investigation, and the incident was deemed “isolated in nature.”

In a press release on May 2018 about the approved budget, Cabrera discussed the changes.

“We have an agreement with our Board of Visitors that our tuition will be below the median of the tuition charged by other state doctoral universities,” Cabrera said. “What we charge our students is significantly below that median while their outcomes are well above.”