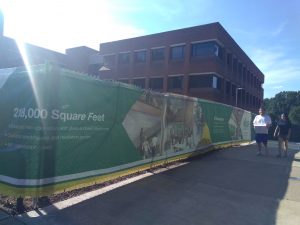 Construction on Robinson Hall, one of the oldest buildings on campus, began this summer. Mason’s administration decided to rebuild the building because the underground heating and cooling infrastructure within it were very old and damaged.

The construction of the proposed 218,000 square foot, six-floor building has been projected to cost around $160 million dollars. It will mostly be paid for by the Commonwealth of Virginia.

Student traffic congestion, Harris Theatre, Roger Wilkins Plaza, and the Mason statue will all be affected by this construction project.

The Mason statue will remain in its current location until 2020. However, it will then be moved to Holton Plaza until construction is completed. The statue is expected to be returned to its original position in the fall of 2021.

Roger Wilkins Plaza (formerly North Plaza) will be reconstructed to extend from Robinson Hall all the way to Southside Dining Hall. Additionally, the clock tower in Wilkins Plaza will be removed this fall and stored in Mason’s warehouse until 2020.

The new structure will be the central location for the College of Humanities and Social Sciences, with classrooms that are expected to accommodate between 27 to 120 students. It will also contain large open areas, a MIX, a meditation garden and a terraced amphitheater.

Currently, Robinson B and Harris Theater are connected, however, Harris Theater will be a stand-alone facility once the new building is completed. It will stand separate from the new Robinson Hall next to the incoming terraced amphitheater.

Due to construction, all areas surrounding Robinson A has been closed off to the public, in addition to the courtyard between Robinson B and SUB 1.

The new structure is projected to be completed in the spring of 2021.