The statistics for sexual and gender-based harassment

Since the beginning of April there have been two reports of sexual assault and four reports of stalking according to the Daily Crime and Fire Log published by the Mason Police Department. 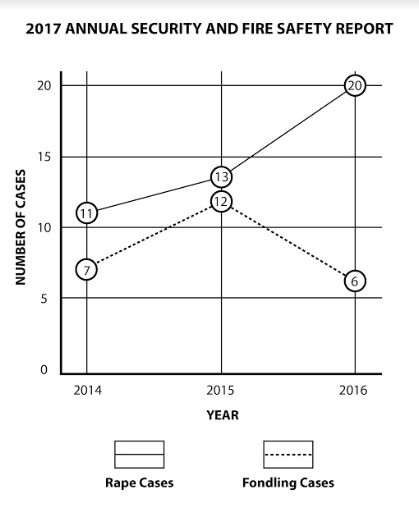 In 2016 alone, there were 20 reported cases of rape on Mason’s Fairfax campus, according to the Crime Statistics Report from the Department of Police and Public Safety. The number of rapes has increased since 2014, when Mason had 11 reported cases. Other crimes reported included stalking, with an almost 50 percent increase from 2014 to the 69 reported cases in 2016.

“Less than 10 percent of our students are interested in a formal investigation,” stated Jennifer Hammat, the Title IX coordinator at Mason. She added most student victims seek a no-contact order instead of an investigation, formal or informal. This order is a contract that can keep a student from contacting another.

According to Mason’s University Policy on Sexual and Gender-Based Harassment and Other Interpersonal Violence, items that are investigated under Title IX include: sexual assault, sexual exploitation, interpersonal violence, stalking, sexual or gender-based harassment, retaliation and complicancy.

Hammat also explained the numbers that are reported were not an accurate representation of all sexual assault victims, and there was not any way to know whether an increased number of reports reflected more crimes. “[Sexual assault cases] are so under-reported,” although the increase in reporting “does show that more people are willing to come forward and report,” said Hammat.

Mason has a variety of resources and educational events throughout the year, which include Take Back the Night, Clothesline Project, The Victims’ Rights Run/Walk, and AnyOne Can Step UP!  and Mason offers a 24-hour hotline for victims of sexual assault.

In 2014, President Àngel Cabrera formed the Task Force on Sexual Assault and Interpersonal Violence. According to Cabrera, the Task Force members provide him with a “set of recommendations” on how Mason can “employ a comprehensive campus-wide approach to eradicating sexual assault and interpersonal violence.”

Items that were marked for improvement in the Task Force on Sexual Assault on Interpersonal Violence report from Feb. 28, 2015 included initiating a broad campus-wide outreach campaign, integrating bystander intervention and healthy relationship materials in transition programming for students, and using the “You Have Options” Law Enforcement program.

Mason is set apart from other universities based on how Title IX investigations are dealt with, as the university has an investigator-adjudication model. This means that CDE is the investigator and gathers the evidence, witnesses and records for a report to build a case.

Because Mason follows a dominating evidence standard, more than half the evidence in a Title IX investigation would need to be convincing, in order to have a case. Actual trials and verdicts are conducted and given by the Office of Student Conduct. Other schools may have the entire process done by one person or even outsource it to a private investigator.

If students have been affected by sexual assault, they may contact Mason’s 24-hour Sexual and Intimate Partner Violence Crisis Line at: 703-380-1434.

April is Sexual Assault Awareness Month (SAAM). An annual campaign at Mason, events and workshops are held until April 26.