History has been made, but the team still has work to do

Mason Men’s Volleyball is making history this season. After beating New Jersey Institute of Technology on March 30, the team secured a berth in the Eastern Intercollegiate Volleyball Association, EIVA, tournament. The team beat Princeton 3-2 the next night to extend the program’s record conference winning streak. Their 10-0 conference record is the best start to conference play in the Mason team’s history.

The Patriots sit in first place in EIVA standings, and have an overall record is 14-10. Though the team posted a 4-10 record in non-conference play it was against tough competition. Head Coach Jay Hosack scheduled some of the toughest teams in the country. 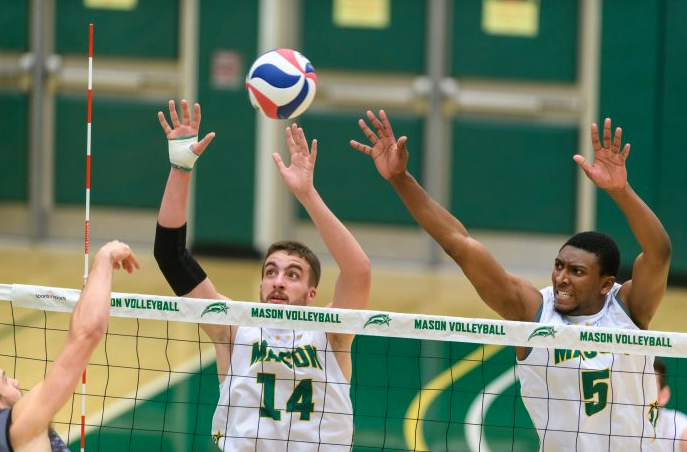 “I think it would have been nice to win those out of conference games, but we knew that they were kind of there to test us and see what we were capable of doing,” said sophomore Hayden Wagner, who leads the team in points and kills. “We knew that once we got into conferences  that’s when we had to take care of business and do what we needed to do.”

Junior Kyle Barnes, who is second on the team in points and kills, agreed that the team’s chemistry has improved throughout the season, saying, “We’ve gotten really close as a team no one’s left out and every person has a key component, especially in practice.  There’s no A and B Team it’s just six versus six and we have great competition on both sides.”

Both Barnes and Wagner cited their victory at Penn State, and sweeping them 3-0 on their home court as one of their favorite moments of the season. It was the first time Mason had ever swept Penn State on their court.

“[It’s] always been something that we wanted to do, and just another thing to check off the list for this year,” said Wagner. “We’re proud and happy we’ve done and hopefully continue to build off that.”

Coach Hosack, Barnes, Wagner are already looking past clinching a spot in the conference tournament. The team is looking to win the regular season title, host Conferences, and eventually win it and move on to the NCAA Tournament.

With four matches left to go before the EIVA Conference Tournament, the final seeding  will be determined soon. Mason had the opportunity to secure home-court advantage this weekend, however after Harvard’s two wins and Mason’s loss to Penn State Saturday night, the school that will host the EIVA Tournament will be decided next weekend when Mason takes on Harvard on April 13 and 14.