SYBRINA FULTON DISCUSSES MYTHS SURROUNDING HER SON’S DEATH AND POLICING IN THE U.S.

Sybrina Fulton, mother of Trayvon Martin, spoke with Mason students for the 2018 Sojourner Truth Lecture in the HUB Ballroom on Monday, Feb. 19.

The event was hosted jointly by the Women and Gender Studies Center and the African and African-American Studies program. Fulton was interviewed onstage by Mason Associate Professor Yevette Richards Jordan.

Fulton talked about memories of her late son and explained myths surrounding his death as motivation to write her new book, “Rest in Power: The Enduring Life of Trayvon Martin.”

“So many other people were telling our story, and they had never met Trayvon,” Fulton said. She and her ex-husband, Trayvon’s father Tracy Martin, wanted to tell their story together as his parents.

Fulton asked students to think of their own families at home, and to understand “your family is not perfect, [and] neither was my family.” 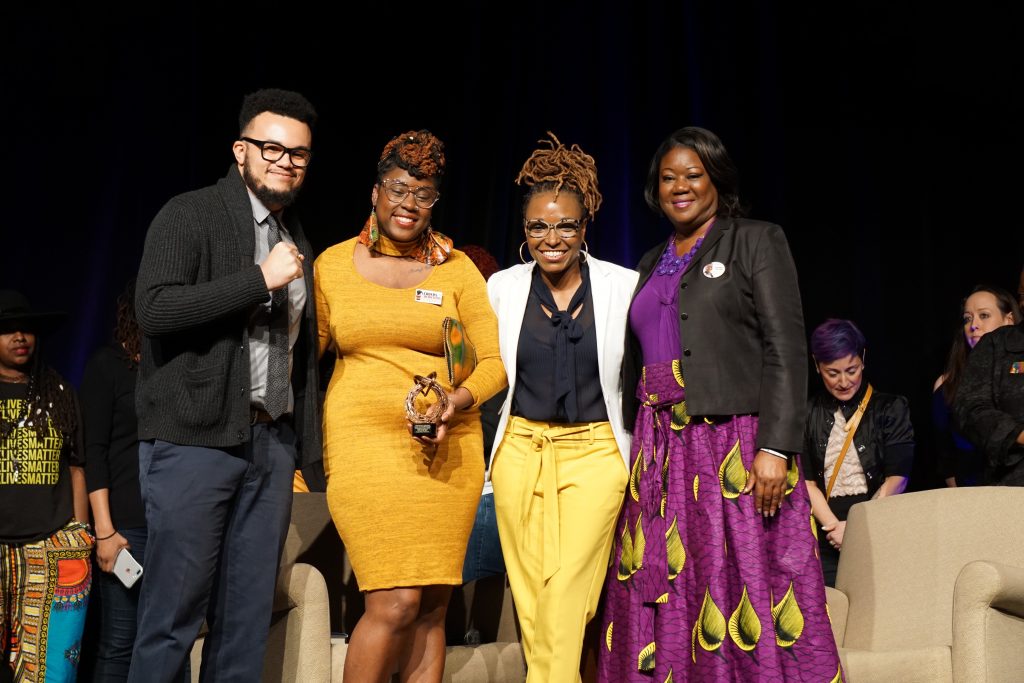 Fulton described herself as an “average mother,” whose kids got into “average trouble.” She disapproved of their fashion choices. These thoughts led to her recalling the now famous picture of her son in a hooded sweatshirt.

“I just thought it was too hot,” Fulton recalled, and “I would tell him ‘take that hoodie off, take that hoodie off.’” After Trayvon’s death, Fulton chose the photo that was presented by protesters and the media because “that was my favorite picture of him… he liked to look a certain way.”

Trayvon Martin was shot dead in 2012 as he walked home from a local store by George Zimmerman, a neighborhood watch volunteer. The incident began when Zimmerman called 911 to report Trayvon as a suspicious person. A struggle began after he physically confronted Trayvon, which ended when Zimmerman fired the fatal shot.

Fulton described a key piece of evidence used by Zimmerman’s defense team at his trial: a weapon Trayvon allegedly used in the altercation.

“A slab of concrete,” she told the audience. “Does that make any sense to you — a sidewalk?”

“He was armed with a drink and candy,” Fulton said of her son, while she described Zimmerman as “a 28-year old with a loaded gun.”

According to Fulton, the defense also “tried to justify [Trayvon] being shot and killed by the things he had done in school.” She admitted her son had “ups and downs with me… but he was a good kid.”

“If this is some ‘bad kid’ [like] they said, why has he never been arrested if he was so bad?”

Zimmerman was ultimately found not guilty of Trayvon’s murder in his 2013 trial. Since the trial, Fulton has become a speaker and advocate for social justice and victims’ rights.

Fulton spoke about the controversies surrounding police shootings and the Black Lives Matter movement. She warned the audience not to “challenge the police like you’re on the street — make it home safely,” so that victims could present their case to lawyers or other authorities rather than escalate a potentially deadly situation.

Despite this advice, Fulton also explained that she has always viewed police in a positive light. She recounted the good experiences she has had with law enforcement in her life, including with her own father, a former police officer.

“There’s no way I hate police officers,” Fulton said. “[But] the person who shot and killed my son was not a police officer… He’s a wannabe cop.”