VIRGINIA IS FAILING TO REACH MEASURES FOR IMPROVEMENT BY 2030 GOAL

The State Council of Higher Education for Virginia (SCHEV) recently released its annual report to the General Assembly for 2017, addressing how the commonwealth’s government plans to achieve its goal of becoming “the best-educated state by 2030.”

The new report makes the case that post-secondary education is the key to growing Virginia’s economy. Ninety-nine percent of the 11.5 million jobs created in the last decade “required workers with more than a high school diploma,” according to the report, and employees with at least an associate degree are 38 percent more likely to have employer-sponsored health care than those with less education.

To achieve the government’s education goal, 70 percent of the working population will need a post-secondary degree by 2030. Currently, the number is 51 percent. 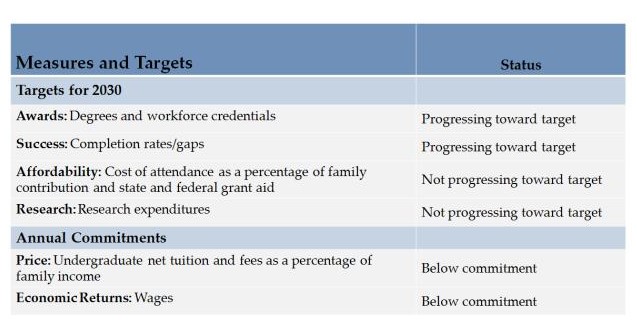 The SCHEV report lays out six measures to chart the state’s progress — awards, student success, affordability, research, price and economic returns. Only the first two measures are progressing on track to reach their targets for 2030.

While Virginia is currently ranked the sixth best-educated in the nation, that ranking slips to eleventh when only considering workers with more than an associate degree. The report blames “four years of net out-migration of working age individuals” from the state for lowering the overall rank and setting back the other progress measures.

The report makes clear that improvements in many education measures have also left behind a “gap” for underrepresented students — “those who are of minority race or ethnicity, receive Pell grant funding, are age 25 or older or represent regions of the state with lower education-attainment rates.” Although university completion rates have improved by two percent in recent years overall, underrepresented students are still seven points below that average. 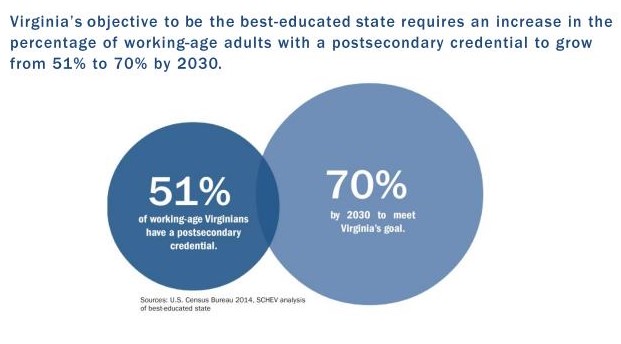 Other measurements in the report show the state is 20 points below the goal of directly funding 67 percent of education costs. This has caused both two- and four-year colleges to raise tuition and fees to recover the difference, while also increasing the need for financial aid for students from low- and middle-income families.

Finally, the report details how Virginia colleges need to increase its share of national research expenditures by 30 percent over the next twelve years to meet its goals. Instead, research costs have decreased by three to four percent every year since 2013, putting the state in 14th place nationwide. SCHEV concludes that unless these trends are reversed, “these declines may affect Virginia’s ability to grow its economy in the coming years.”

Why Flu Season is Worse than Usual

The Race for 2018 Midterm Elections Heats Up