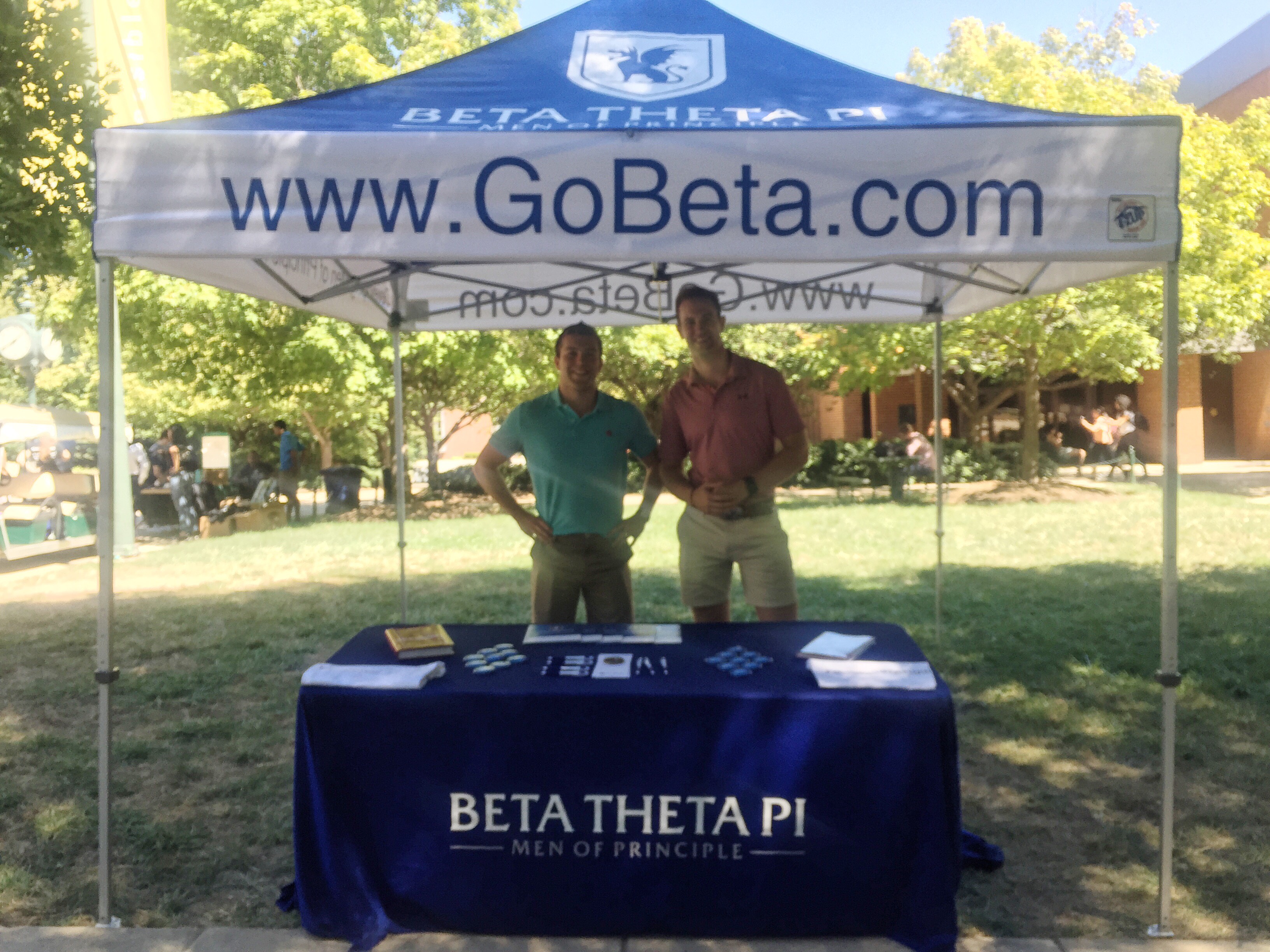 Jordan Lemoine & John Hubbard actively in the JC quad area, recruiting for a newly formed fraternity here at George Mason. Beta Theta Pi has successfully recruited 30 students but looks to expand out to at least a total of 50.

Fraternity Beta Theta Pi is making a comeback to Mason’s campus after the chapter was closed down in 1997 due to low recruiting numbers.

Back then, there were only about 24,000 students enrolled at George Mason, but now that Mason has an enrollment number of 34,000 students, the opportunity to grow the fraternity again has presented itself, as well as an attempt to re-envision fraternity culture.

Beta Theta Pi is a part of Mason’s Interfraternity Council (IFC), which is a council “comprised [sic] of 14 men’s fraternities committed to scholarship, service, leadership, and brotherhood,” according to the Office of Student Involvement website.

In addition to Mason’s chapter shutting down, several other chapters across the country closed their doors as well. Beta has closed about half of their chapters, including their founding chapter. The Alpha chapter was opened in 1839 in Oxford, Ohio, and closed in February 2014.

“In the ‘70s, ‘80s and ‘90s, fraternities really became entirely about social [and] partying,” Jordan Lemoine, a Beta Theta Pi staff member and alumnus who is here at Mason to recruit and grow the chapter, said. “It became that “Animal House” culture that you kind of see now. Beta realized that is not what we were about and we really needed to change.”

Lemoine added that Beta Theta Pi’s commitment to a safer fraternity culture in terms of preventing sexual assault and the other issues fraternities face starts at recruitment.

“The guys we are recruiting are the highest-caliber guys we can find here at Mason. We walk them through our membership expectations before we offer a bid. Whether it’s succeeding in the classroom and performing above the average, or maintaining the culture of responsibility around alcohol.”

Lemoine continued that the fraternity will provide risk management training, which would ensure that members would understand the impact that their actions can have on others. The ones who do not meet the expectations would no longer be a part of the fraternity.

Mason did not have members fail to meet Beta’s expectations as other closed down chapters had. Rather, they struggled to recruit enough members and did not have the resources to stay afloat.

One of the resources that was added to ensure the Mason chapter’s success was hiring Lemoine, who will stay for this first year to supervise and teach the founding Mason chapter. After he leaves, a Beta Theta Pi staff member will visit four to five times a year to offer additional support.

“It’s first important to recognize, even with the resources we provide, at the end of the day it’s the choices of the men in the group to really want to succeed and want to be that values-based fraternity that we’re trying to provide,” Lemoine said. “We’ve brought in experts to help us keep it going and make it as successful as possible.”

Lemoine will also have the help of Sharrell Hassell-Goodman, one of Lemoine’s 12 recruits and a lead advisor for Mason’s chapter. She is a Ph.D. student in Mason’s education program and was the director of Sorority and Fraternity Life at Ohio State University.

“I know that with her [Hassell-Goodman] and the rest of the advising team, which includes a lot of Beta members and alumni from other schools. … [I]t’s a really diverse group that’s going to be mentoring and working with our leaders in the chapter and really helping ensure we stick to who we are,” Lemoine said.

With Mason’s increase in enrollment since 1997, the diversity and opportunities offered by the university for greek organizations like Beta Theta Pi have increased as well.

“There are some Beta alumni that are here and have been really wanting Beta to come back to George Mason, they’ve been telling us how exciting of an opportunity it is for the growth of the campus and the high caliber of student we’ve looked at coming here for a couple of years,” Lemoine said.

Lemoine added that an increase in diversity on campus was a factor that went into the decision to restart Mason’s chapter.

“Having a diversity of opinion and diversity of experience is what’s really going to help you grow,” Lemoine said.

The Beta recruiters have been seeking leaders on campus to recruit to the fraternity through professor referrals and speaking at different campus organizations and departments. They also have a tent pitched in North Plaza where students can ask questions and sign up. Since beginning recruitment on Aug. 29, they have reached the halfway point in just three weeks.

Lemoine said Beta’s standards are clear: “We don’t try to dress it up and act like any other fraternity.”

Mason printing gets a makeover