It may seem unlikely that art history and science, technology, engineering and math (STEM) have anything in common, but through the creation of a tool by Assistant Professor Lincoln Mullen, the convergence of these fields is starker than ever.

Mullen is an assistant professor in the departments of history and art history and a historian of American religions. He also works on digital maps and visualizations and teaches a graduate class on programming for historians as well as other classes on digital history.

Mullen’s ongoing research project, called America’s Public Bible, displays how skills found within STEM fields are becoming more relevant within humanities-based research. The project “uncovers the presence of biblical quotations in the nearly 11 million newspaper pages in the Library of Congress’s Chronicling America collection,” according to the website that he created to display his findings.

Mullen used his digital skills to write a computer program that detects the use of Bible quotations using something called machine learning, which is when computer programs can teach themselves to grow and change when exposed to new data.  Through this technological tool he was able to identify over 866,000 quotations of the Bible, or verbal allusions (verbal references to the Bible), to specific biblical verses in newspaper pages. 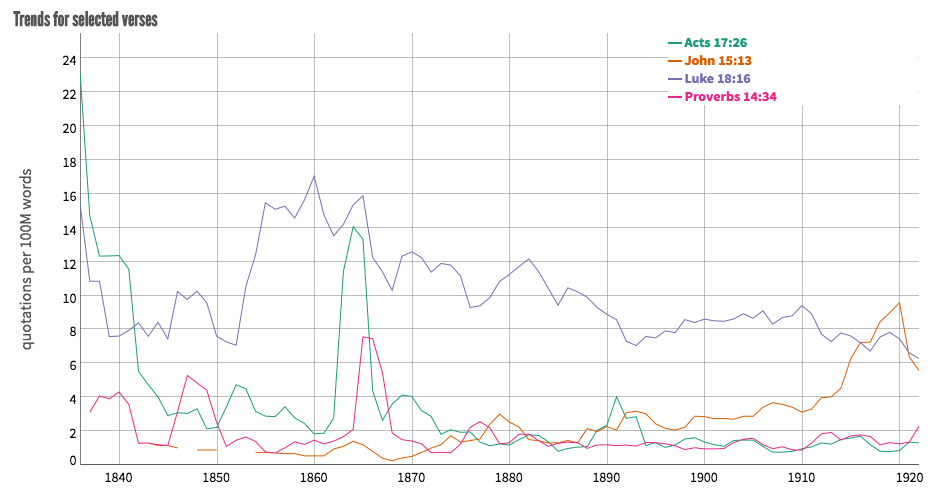 Mullen said this tool was important because it helped him aggregate a vast amount of information that helped him draw broader conclusions about the transformation of society during different time periods. For this project in particular, Mullen looked between 1830 to around the 1920s.

One such societal change Mullen identified through the use of Biblical verses in newspapers was the spread of Evangelical Protestantism in the 1830s and 1840s, as stated on his website.

Just as Mullen’s project was based in humanities but required knowledge from STEM fields to create, “students at Mason who take classes in undergraduate history are teaching people a way of thinking that is deeply rooted in humanities, but broadly STEM applicable,” Mullen said.

For example, Mullen said in classes such as History 390: The Digital Past, students are often asked to create their own kind of digital project where they create a website with historical maps, data visualization and other technological tools.

“Sometimes people think that history teaches what happened in the past, but really it’s about how do you ask and answer questions using resources which are available to you. You’re learning on the one hand how to work with digital tools and techniques, learning to make maps or data analysis and the art of historical inquiry,” Mullen said.

Mullen said he was inspired to search for biblical quotations in newspapers because “you know of this big compilation of newspapers and have to ask yourself ‘how do you make all of these newspapers useful and say something meaningful that has an argument or story about the past?’”

Mullen added that the significance of the story he told through tracking the history of biblical quotes in newspapers was not only a past recollection of events but rather “a deeper reflection on how multiple meanings are imputed to the bible during different contexts and how they changed over time.”

In the future, Mullen said he plans to “write another computer program which takes data and puts them into groupings of time-clusters to put together the verses popular in WW1, in Civil War” and then explore the answers as to “why were they [certain Bible verses] popular during a certain era”. 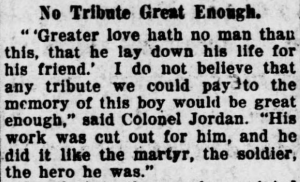 “A memorial to an Rock Island, Illinois, soldier who died in World War I after saving other soldiers in a mustard gas attack, quoting John
15:13. From the Rock Island Argus(Rock Island, Ill.), 14 Nov. 1919.”

Mullen said that his project is just one of many of this nature being done that makes Mason stand out from other universities.
“This is one particular project that I did, but there’s more than over a dozen people doing work like this in the digital center,” Mullen said. “This is the kind of thing that distinguishes history education at Mason [more] than at other universities.”