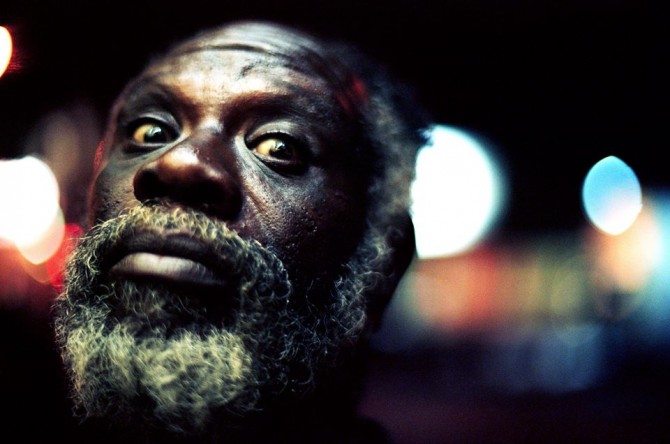 Making its debut with an unforgettable title, “Field Niggas,” is a documentary that is not as controversial as its name implies.

Filmmaker Khalik Allah delves into one street corner in Harlem, New York — 125th and Lexington Ave — and documents the enchanting and intimate voice of a number of homeless and marginalized people living there.

Mason held a film screening for Allah’s documentary on Tuesday, April 5, in the Johnson Center Cinema. A Q&A session followed with Allah as well as The Washington Post’s chief film critic, Ann Hornaday.

Allah grew up in New York and developed a passion for photography when he began photographing members of the Wu-Tang Clan, a popular hip-hop group that originated in Staten Island. Filmmaking also grew to be his creative outlet, as both mediums seemed to overlap for him.

This is very apparent in Allah’s film, which he describes as a “photographer-style documentary.”

In Allah’s documentary, the audience is often staring into the eyes of the people on screen. There is audio of their conversations with Allah, but the onscreen image of their faces stands still and moves slowly, giving the film a mesmerizing and grounded tone.

The technical style of the film forces its audience to connect and engage with the stories being told on screen.

“I think [the film is] visually beautiful,” Hornaday said. “Something just about the composition of the shots, his pacing, and the way he allowed the audience to settle in and spend time with these people — that really captivated me.”

The title of Allah’s film is inspired by a Malcolm X speech, “Message to the Grassroots.” Yet, a lot of responsibility came with a title like “Field Niggas” to make sure the film gave positive attention to Harlem and accentuated its beauty rather than its darkness.

“I felt that, when you have a film with the title ‘Field Niggas,’ you’re walking a fine line of ‘Is this genuine or is this exploitation?’” Allah said.

To strike this balance, Allah decided to include himself in the film by showing his face and leaving in his voice when he’s having conversations with the people on 125th and Lex.

The documentary is not explicitly political and has no intention of being that way. Rather, it is intended to be a documentary with a humanity that captures the reality of the environment that members of the community live in.

“What I really took from this movie is that it’s almost more of a spiritual experience than a political experience,” Hornaday said. “Just in the sense that they’re bearing witness and in the sense that it’s deeply listening to other people. He opens up this very deep space for, and countering, humanity. He conveyed humanity in a way, that I thought was really powerful and really beautiful. It’s political in all the right ways.”

Rather than interviewing politicians from the local area, Allah allows community members to express themselves. In that sense, the film is told from the inside out and gives a portrait of people’s lives. Allah’s film is told with smart politics that makes its audience bear witness.

“I wouldn’t describe this film as a polemic,” Hornaday said. “But I think the film is deeply political because, I think what he’s getting at just allows the viewers to spend time with people, that probably on any normal given day they would not be spending time with.”

Allah did not intend for the film to impact the community on 125th and Lex, but the film’s positive reception has garnered more awareness to the problems within the area.

“That was never one of my intentions but I think it [made an impact],” Allah said. “It’s grown more attention to that area since the film has been released. The New York Times did a big piece about [the film], and four months after that they did a piece specifically about K2. 125th and Lex was the center — the nucleus — of K2 in the city.”

K2 is known as a type of synthetic marijuana. Many homeless people in New York use the drug because it is cheaper than marijuana and does not show up in a person’s blood stream. However, using K2 is still considered a minor offense and it’s now used as a tool to gentrify the area on 125th and Lex.

The film definitely made an impact on the audience members at the Mason screening. One audience member, Tammy Chorbaji, admitted during the Q&A session that initially she judged the film, but eventually came to an understanding of the film and the people in it.

“I want to admit, I judged you in the beginning,” Chorbaji said. “I hated [the movie] in the beginning, I couldn’t see past it. I don’t know when or at what point I stopped judging and started to listen — and most of all see. The beautiful faces that you depicted in this documentary was wonderful. It was real. Honestly, I’ve never met anyone like any one of those people in the film.”

The egoless tone of the film enabled Chorbaji to step outside of her own perceptions and see the film for what it is.

“It wasn’t about me, and that’s where my mistake was. I was putting myself in that situation. So I thank you, and I applaud you because this is teaching other people. You’re showing them, the people in the film, that they’re better than they think are in that moment. There’s so much to them. And for me to watch them, and at first judge them, then turn around and say I see you– thank you.”

Her comment was followed by applause from the audience as well as Allah.

Freedom of the press: Conference examines accessibility in scholarly publishing