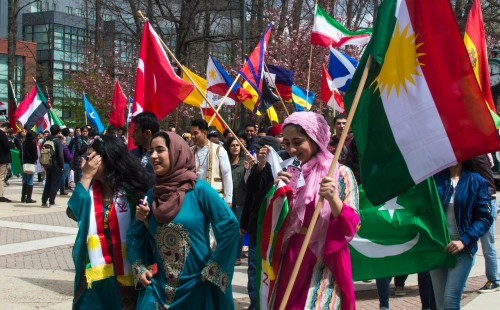 Mason’s annual International Week parade showcases the diversity of the student body as students carry flags of countries from all over the world. (Alya Nowilaty/Fourth Estate)

On Tuesday April 5, Mason’s Office of the Provost hosted an event to discuss student and faculty inclusion within the Mason community. The event, “Doing What Matters: Pathways to Inclusive Excellence,” will be the first in a series of several events addressing questions of inclusion at Mason.

President Ángel Cabrera opened Tuesday’s event by introducing keynote speaker Dr. Tricia Rose, professor of Africana Studies and the director of the Center for the Study of Race and Ethnicity in America at Brown University. The public event filled Dewberry Hall with equal parts Mason students, staff and faculty gathered to listen about the sensitive subject of inclusion and diversity on campus.

“Yes we [the Mason community] are diverse, but are we inclusive?” Cabrera asked in his introductory speech.

Mason welcomed Rose back to campus to speak on this divisive topic. Rose has previously spoken at Mason on social inequality issues, including speaking at the university’s Black History Month events in 2015. She is internationally renowned for her study of post-Civil Rights Era culture and social inequalities within African-American communities.

According to Rose, the challenges of new structural racism and stereotyping in American society are preventing social equality.

“A lot of institutions have fallen asleep behind the wheel,” Rose said in reference to recent racial inclusion and diversity conflicts raised at unversities across the nation. Rose told audience members that they must look at the diversity and inclusion issue as a societal problem, not merely an issue isolated to academia.

According to Rose, the way society missuses egalitarianism, the principle that all people are equal in society and ‘color blindness’ has created a “gap between what we think and what we have since the 1960’s [civil rights movements].” She said people today believe themselves to be racially unbiased, but this only masks the truth. This line of thinking is making it difficult to have an honest conversation about how statistics show social inequality in areas like higher education, the criminal justice system and wealth, she said. She also said there is fear among universities that “inclusion will drag down their excellence.” In the U.S., African-American women hold only 0.3 percent of the PhDs; Rose is included in this minority.

Rose suggested that college education itself could be a way to fix this disparity. “Our curriculum is our biggest weapon to confront these issues,” Rose said.

The event took place at an opportune time when students are questioning their universities’ inclusion and diversity policies. Last March, Princeton University faced protests from students for failing to rename its public policy school, the Woodrow Wilson School of Public and International Affairs. Woodrow Wilson, the 28th president of the United States, was a supporter of the Klu Klux Klan.

Here at Mason, the recent removal of Dr. Shaoxian Yu from his position as associate director of the Office of Diversity, Inclusion and Multicultural Education (ODIME) incited student protests over what some saw as an existing inclusion problem at Mason.

In Cabrera’s opening statement Tuesday, he stated that the goal for Mason’s inclusion efforts is to “increase cultural proficiency of our staff.” Cabrera said Mason prides itself on being a multicultural university compared to many other higher education institutions, but Mason’s faculty population is less diverse than its student body.

Recently, Cabrera has made strides toward greater inclusion on campus by establishing a Diversity and Inclusion Leadership Council to advance these goals.

“The council is charged with recommending and promoting policies, programs, and other initiatives that will attract and retain a diverse mix of faculty, staff, and students,” he announced in a school-wide email on March 21. The effectiveness of these new policies is yet to be determined.