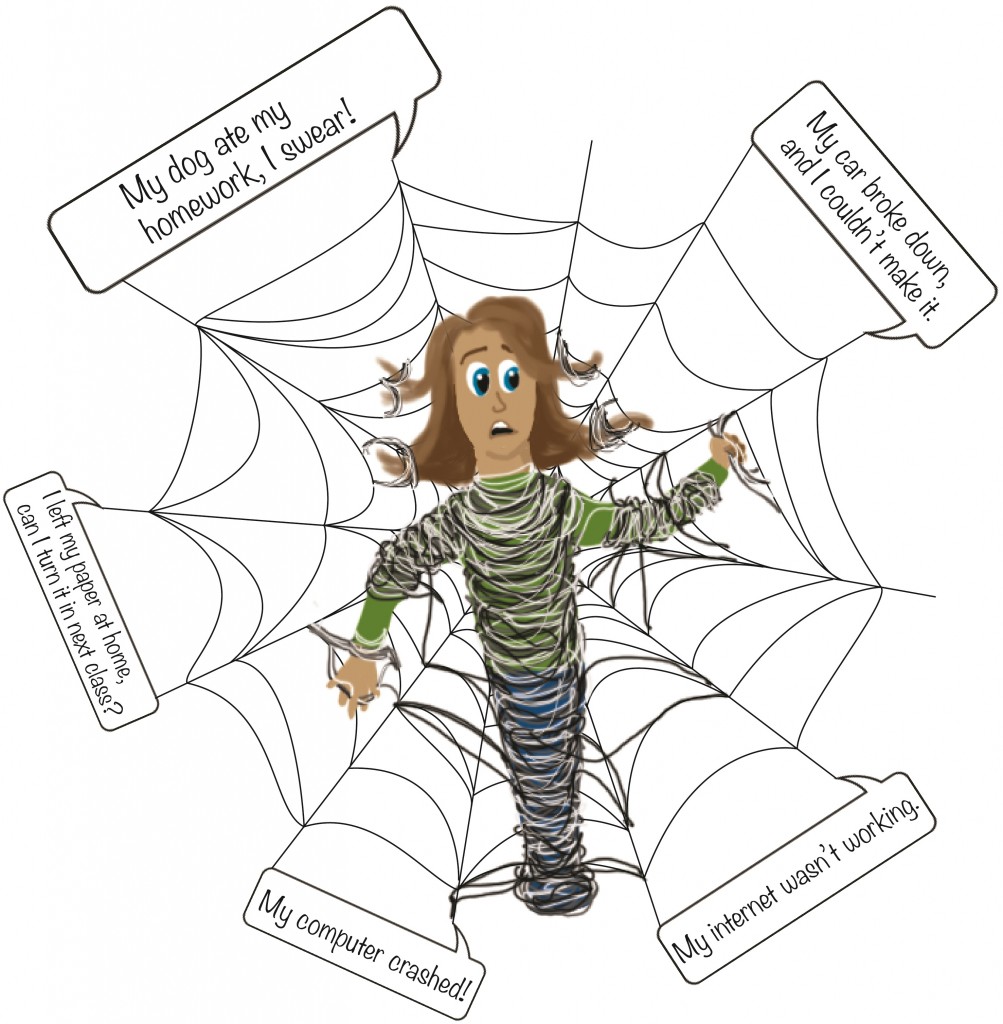 “My dog ate my homework.”

If that excuse didn’t for you in elementary school, what makes you think a college professor is going to believe it?

We’ve all been there. You feel like you can’t finish an assignment — or you simply don’t want to finish it — so you come up with an excuse that is not the slightest bit true or even reasonable.

While a little white lie might seem like an easy way to get an extension or sympathy, honesty is always the best policy. Many professors are very understanding when students tell them the truth and are willing to work with students for a resolution.

But if you do choose to disregard the truth of your situation, don’t think that whatever clever excuse you’ve come up with hasn’t been heard before!

French professor Nadia Duchelle said she has heard every range of excuses students have to offer.

“I used to save all the student excuse emails I received since there were so many,” Duchelle said. “They’ve told me about car trouble, their alarm didn’t work, dog ate my homework, death of a family member, being sick, having migraines and so on.”

And while many students often suffer the loss of family members in college, using that as a phony excuse is no laughing matter. “Some students have killed their grandmothers over and over and over again,” Duchelle said.

Believe it or not, “dead grandmother syndrome” is a real thing according to Mike Adams, a biologist at Eastern Connecticut State University. Adams collected data for 20 years and concluded that students’ grandmothers were far more likely to die before midterms than at any other time of the semester.

Professors use their own discretion about whether or not to ask for a death certificate if a student claims a family member or close friend has died.

Car accidents are also a common ploy to get out of an assignment. One anonymous Mason student reported hearing another student tell a professor she had been in a car accident and could not make it to class one morning. While the student had indeed been in a fender bender, she neglected to tell the professor that it had happened a few weeks ago – not the morning she chose to skip class.

Just remember, your professor might want paperwork that shows proof of the incident.

Technology problems are also common, whether it’s spilling coffee on a laptop or forgetting to save an assignment. Students cannot rely on technology wholeheartedly, which is why it is important to start early enough that there can be time to combat any issues that arise. Remember to save early and often, and always back up assignments.

In addition, while your printer might actually fail on the day you have a huge paper due, this is not a good excuse. Mason students have the ability to print work at different spots around campus.

Similarly, though Mason’s Wi-Fi has been known to falter at the worst times, the university has been working on improving the situation this semester. If you were planning on using poor Wi-Fi as an excuse for not submitting an assignment on time, you might want to think again.

An issue that is particularly unique to Mason is when the circus comes to town each spring. For two weeks, the Ringling Bros. and Barnum & Bailey Circus takes up vast portions of the parking lots students use.

Senior history major Madina Niaz does not appreciate when the circus comes to town. “It upsets me that I pay upwards of $400 for parking to only have elephants and other animals take up my spots along with the traffic of people who come to watch,” she said. “I was late to class last week because of parking. In earlier years I would have skipped my classes, but now in my final semester I just have to deal with it.”

Sickness is another common excuse for missing class.

“I rarely skip class, [but] if I ever have a dire circumstance, like I completely blanked on an assignment, I will just pretend I was sick,” an anonymous student said. “There have been times where I just needed more sleep, so I told my professor I was sick and couldn’t make it to class.”

This excuse really only works if you use it sparingly, but it can be easily regretted if you actually get sick later in the semester. Be careful with your web of lies!

“Save the sicknesses for when you’re really sick, and don’t jinx your family by saying someone died when they really didn’t,” The anonymous professor said. “Read the syllabus, and know the professor’s rules for missing deadlines and tests.”

What’s to come for Mason basketball?