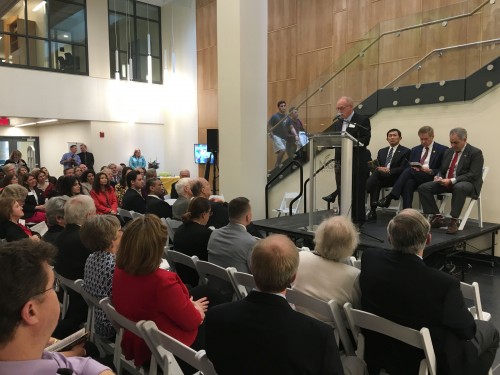 The Fenwick Library is the newest and largest library located on Mason’s Fairfax campus. The expansion cost $60 million and the total space is about 150,000 square feet. It can house 2,000 students with an additional 30 study rooms dedicated to group sessions.

Brian Lamb, the founder of C–SPAN, gave the keynote address for the opening. Other speakers at the event included Dean of Libraries John Zenelis, University Board of Visitors Rector Tom Davis, University Provost David Wu and University President Àngel Cabrera. They each talked about a different aspect of the significance the Fenwick Library has on the campus as a whole.

Following Lamb’s keynote address, the main event open to the public began with each speaker giving their remarks about the library.

Zenelis discussed the impact of increasing the space to 157,000 square feet.

“It offers more suitable space capabilities for research purposes that did not previously exist on this campus,” Zenelis said.

Cabrera discussed the complexity of creating a new library that was not only better, but one that reflected values of how students interact with libraries in the age of technology.

“This was an exercise of figuring out what a library ought to be in the 21 century,” Cabrera said.

In regards to using the library, Wu discussed the importance of students knowing how to conduct primary research through books, as information found on the internet cannot always be verified. He also talked about how the new library will help Mason solidify its position of being ranked a R1 research university. The Carnegie Classification of Institutions of Higher Education rates colleges based on whether they meet criteria that counts them as doctoral research universities and then ranks them as R1, R2 or R3. There are 335 colleges on the list, with only 115 being R1. With its R1 rating, Mason has entered the highest research activity category.

“Mason is now a research one university by Carnegie, and it’s quite fitting that in the same semester we opened this state of the art library,” Wu said.
Lamb wrapped up the speeches by discussing how his amiable relationship with Zenelis is what led him to donate his entire Booknotes collection to Mason.

“John Zenelis sent me a letter in 2005 saying I would like to have your books for the library and six years later I said yes because it just sounded like a neat idea,” Lamb said.

Lamb also talked about how the university’s founder, George Mason, used a library as the main source of education. He ended his remarks with a quote by John Adams.

“‘I am mostly intent at present, upon collecting a library, and I find, that a great deal of thought, and care, as well as money, are necessary to assemble an ample and well-chosen assortment of books,’” Lamb quoted.

Lamb added that he thought the library is terrific and students here should know it’s one of the most modern of all libraries in any school.

“Libraries reflect [their] environment and I think that this one really reflects Mason in a way,” Coniglio said.

She added that the amount of student traffic has increased.

“I wasn’t here when the library initially opened but on a daily basis I would say it’s at least significant and the thing that has been significant to us is that students have responded to it so warmly and wonderfully,” Coniglio said.

Sophomore Intisar Khan said he at first thought spending $60 million was too much, but later changed his mind.

“At first I thought it wasn’t but now I do believe it is better because I used to walk 20–30 minutes, now I just come here,” Khan said.

The new library houses a variety of new technological features and additional workspace. There are 30 group study rooms, all equipped with white boards, monitors, and some with screen sharing capabilities. There are also private study pods where students can take power naps or unwind. A section of the library will be open 24/7 with a café also being added. Both these new developments are planned to take effect in the near future.