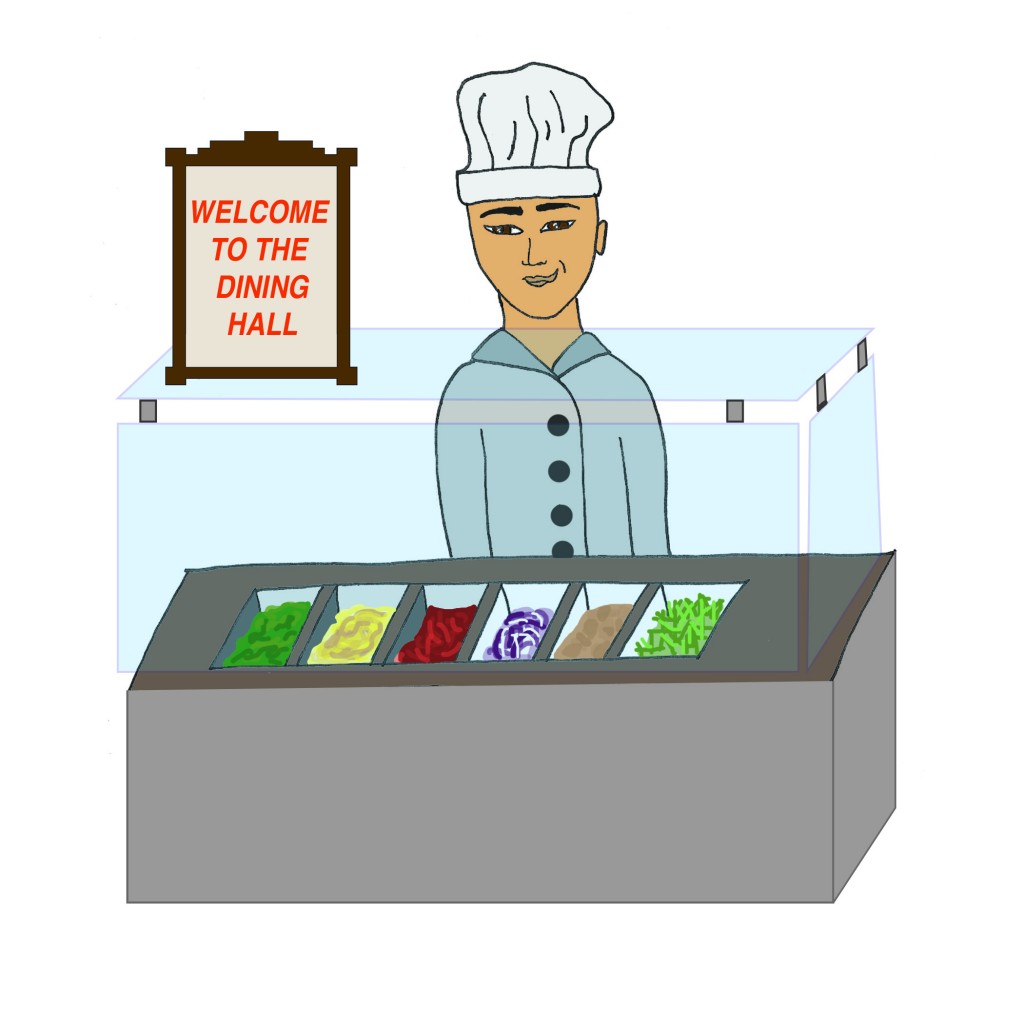 The staff at Mason Dining is just as organically diverse as the students whom they feed.

Ethnic diversity is reflected in the more than 10 languages spoken by the dining staff every day as food is produced and consumed. Staff members are originally from the United States, Spain, Guana, the Dominican Republic, China, Vietnam and other countries all over the world.

According to Michel Wetli, Mason’s Dining general manager, among Mason’s 125 student and 450 non-student employees, 60 percent of staff do not identify English as their native language.  This can result in communication difficulties between staff and management.

“I witness enriching conversations between employees on a daily basis, where you hear them speaking in English and in their native language,” Wetli said.

One of the things that makes eliminating language barriers easier is employees’ knowledge of what is commonly referred to as “kitchen English,” which includes the English names for ingredients, equipment, eating utensils and cooking techniques. This allow employees to communicate effectively in a kitchen environment without having to speak fluent English.

Management ensures that the employees placed at high-interaction stations are well suited for the job. Staff is educated in how to prepare, handle and serve special dietary-specific items.

“I’ve been in the business for years and years, and it is far more accommodating than in years past,” Feindt said, commenting also on the increase in resources available to staff who are not comfortable in English.

At Southside alone, half a dozen languages, primarily Spanish and Mandarin, are spoken among staff members. Mason Dining sees this diversity as an advantage, although it can pose some problems.

Valencia Hunt, Southside’s supervisor, is originally from Louisiana.  Hunt grew up speaking French and Creole, though neither has helped her communicate with staff at Mason Dining. Hunt supervises a large number of employees who prefer to speak Spanish. She admits that this can cause complications, but she is always able to find a way to communicate.

Hunt said she has noticed a lot of positive reactions from students who appreciate the diversity among Mason Dining’s staff. Hispanic students in particular often approach staff and speak to them in Spanish. This diversity is not only limited to Southside, however. She also witnessed this when she worked at the Bistro.

“Every place I’ve been to has been very diverse,” Hunt said. “It’s a challenge that I think we do a great job at meeting.”

Hunt says she values the relationships she is able to form with her staff that would not have been possible 40 years ago. The food industry has changed significantly since she entered the industry in the ‘70s, and at Mason Dining, Hunt has been able to learn to cook foods from other regions and share in her employees’ experiences.

Special care is taken at food stations that require additional expertise. In the areas that serve Halal or gluten-free foods, extra time is taken with staff to ensure that there is no cross contamination.

Juan Seguin, manager at Southside, often serves as a translator for his staff. Seguin is originally from Peru and speaks both Spanish and English. Every day, Southside staff participates in ‘the Huddle’ to communicate information regarding food training, kitchen policies, payroll updates and other essential information. Seguin translates the content verbally into Spanish, but employees that speak other languages rely on each other to interpret.

Chinese workers who speak primarily Mandarin help each other and employees who are comfortable in both Mandarin and English help their co-workers to understand.

“[Employees] get the information they need to so there won’t be any miscommunications,” Seguin said.

Seguin also takes the time to learn phrases in other languages so that he can better connect with all of his employees. He feels he is “blessed to communicate in both languages,” but he puts forth effort to learn even more. He frequently says “Good morning” and “Thank you” to employees in Mandarin.

Seguin also sees language differences as an opportunity for employees to bond. In an environment with so many languages, employees sometime have difficulties communicating with each other. In everyday communication, “[Employees] always get a laugh because you understand each other’s struggles,” Seguin said.

Seguin feels that the iconic “melting pot” of the United States is reflected in Mason Dining’s staff and is excited to have met employees from all over the world. Seguin specifically spoke regarding this past year’s Holiday Party between the employees at Southside where he was able to watch his employees talk, laugh and be friends even without sharing a common language.

“[I see people] coming together as one, and that is pretty neat to witness,” Seguin said.

Amy Pel, sous chef at Southside, is fluent in five languages. However, her extensive knowledge of Laos, Cambodian, Thai, Vietnamese and English only covers half of the languages spoken at Southside. Pel is often called on to translate for two employees or to clarify communication between an employee and management.

The cooks she supervises all come from different backgrounds and many of them identify Spanish as their native language. Pel said most employees understand varied amounts of English, even if they cannot speak it fluently. Pel mentioned several times that she does language differences hardly comes up as an issue in the kitchen.

In her year and a half with Mason Dining, Pel has worked at both Ike’s and Southside. She said she has experienced huge positivity in regards to diversity inclusion.