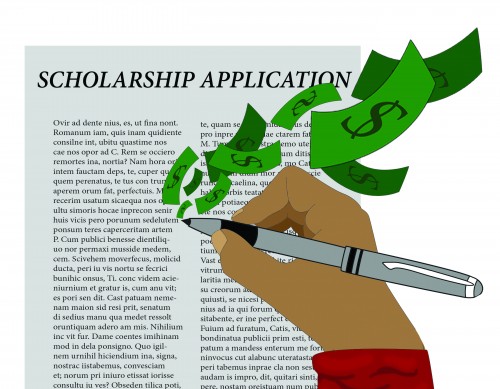 One year after a series of changes to the online Mason Scholarship application, the Office of Scholarships and Financial Aid (OSFA) is continuing to modify the application for the scholarship, which provides hundreds of internal awards to students every year. The application for scholarships that will be awarded for the 2016-17 school year will likely be due in early May; however, an exact date has not yet been selected.

One change to the application, that will go live this spring, will be the implementation of the Central Authentication Service (CAS), which allows a student to sign in to the scholarship application through Mason’s student authentication system, similar to how students would log into the library systems or PatriotWeb. This ensures that only students with a Mason ID can submit an application and it makes reviewing the submissions easier for OSFA.

Some of the questions in this year’s application have been changed, too, said Rosalind Moore, current scholarship manager at OSFA, to better reflect donors’ criteria in selecting candidates. Students are now “auto-applied” to some scholarships based on their answers to the general application, but still need to fill out additional information for other scholarships. The GPA requirement has been decreased from 3.0 to 2.7 for the general application because certain awards only require a 2.7 minimum, according to Moore.

The OSFA is also working with IT Services to improve capacity, Moore said, as the application tries to accommodate the multitude of users on both the student and administration sides. “We tend to have a problem around the deadline, when you have a large amount of students trying to submit the application, so it slows the process down. It does affect the capacity, so we have addressed that to the vendor,” she added.

Both Moore and Paola Torrico, scholarship coordinator, advise students to apply as early as possible to avoid problems or delays with the online submission of their application.

In early 2015, the scholarship vendor, STAR, was renamed Award Springs. The vendor offered a beta test, a kind of test-drive of the new application, to the OSFA and its former director, and the original changes were made when Mason switched over to the beta platform.

“They [Award Springs] were making some improvements to the application and were looking to George Mason to give some feedback about the process,” Moore said about joining the beta test. “They wanted to simplify the application.”

The main difference between the 2014-15 and 2015-16 applications was the appearance of the interface, Moore said. The student dashboard, which provides students a summary of their application process, was expanded and more information about the individual scholarships was included as well.

Moore added that although Mason’s relationship with STAR, and later Award Springs, was fairly new, the company had been collecting data and feedback from universities for many years. Award Springs’ website states that in the past two years alone they have worked with over 200 institutions to provide scholarships and awards.

Although OSFA was not directly involved with the changes made to the application during the beta test, they did have control over the information provided, such as questions and available scholarships.

Moore said feedback on the new application was collected throughout the beta test, first from the administration’s side and then from students’.

“We’re working on a process. I can’t tell you it’s perfect now. Anytime you’re starting a process, you are going to do a reassessment every year to see what works and what doesn’t work,” Moore said.

To collect feedback in the early stages of the application, Moore said they used the many students completing work-study hours for OSFA to gain feedback.

“We just want to make it [the application] very accessible, so it’s easy for students to find and navigate through the scholarships,” Torrico said.

Many of the responses, according to Moore, were about how the software determines a student’s eligibility for the scholarship. Through the software, students may be deemed eligible for many scholarships, but once OSFA reviews the application, the number of awards they are actually eligible to receive decreases. This can result from student errors or confusion when filling out the form.

To remedy this, OSFA runs what they call a “clean” after all the applications have been submitted. This process ensures that a student’s name, G Number and other information match up. According to Moore, this process can take up to four weeks, especially after an update like the beta test.

The 2015-16 application year saw an increase in the number of scholarship applications, with a total of 2,300 submissions, but after running the clean, Moore said, the number of eligible students decreased to 1,800, often because transfer or first-time freshman students applied as well, and they are not eligible for the Mason Scholarship.

Torrico advises students to be as careful as possible in completing the scholarship application.

One change Moore would like to see made to the scholarship program is how it communicates information to students. According to Moore, there is a lot of confusion about which funds will be awarded and when they will be deposited to students’ accounts.

“Our goal is to have departments award early so students can see their awards. … Our goal is to try and award anything that is for the academic year before bills are posted. Students want to know if they have been awarded a scholarship, and we really want to tell them,” Moore said.

As IT Services continues to work on the CAS system, Moore said that the OSFA’s goal is to launch the scholarship in early March and close it on May 1, though exact dates have not been set. Moore encourages students who have feedback on their experience with the application to contact both the OSFA and the vendor directly through the support tab on the application.