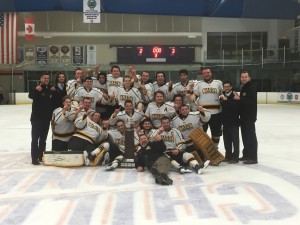 The men’s club ice hockey team brought home the Blue Ridge Conference trophy this past week for the first time in Mason history. After seven years with the team, head coach Steven Hyjek was proud to finally take home a conference win to cap off his final season with the men.

The team is part of Blue Ridge Conference that holds around 20 ice hockey programs. Mason’s team falls under the Colonial region, which has a group of six teams, including Christopher Newport University, whom Mason faced in the championship game.

After a tough match, the men put in their third goal with about five minutes left in the third quarter. This was the final goal of the game, ending it with a final score of 3-2. Mason had never beaten CNU before this championship game.

Freshman forward Jack Kelly said, “there was a lot of tension going into [the game]” due to the team’s history of losses against CNU.

Fans and spectators did not expect this success either. “In the 2015 semester, we were below 500. We were struggling a bit,” Hyjek said.

However, after winter break, players came back refreshed and ready to take on their toughest competitors. A new defense brought a new energy to the team that helped carry them through the season.

“We made a big tactical change in the fall. We knew we couldn’t play run and gun with some of the teams we were playing with so we decided to run a trap,” Hyjek said.

A trap is when the team falls back on defense, drawing its opponents toward the goal box and ultimately “trapping” them, which forces opponents to either dump the puck or turn it over.

Mason’s ability to execute this style of play led to an increased confidence on the ice and better results on the scoreboard. The team went undefeated in regulation games, losing just one overtime game to Alvernia University in a nail-biter.

Senior captain and defender Nick Baker has been on the team since his freshman year. Baker said he usually does not say much to the team before games however, before this final championship, Baker reminded his teammates that it might be the last game for a lot of them.

“I said, ‘Look around. This is going to be the last hockey game that a lot of these people play, so let’s really go out with a win,’” Baker said.

The team is also a part of the American Collegiate Hockey Association (ACHA), whose rules differ from the National Collegiate Athletic Association (NCAA). In the ACHA, men are able to play for two additional semesters after completing their undergraduate studies, as long as they maintain six graduate hours per semester.

The team has three graduate students who will be hanging up their skates this month and three senior undergraduates whose ice hockey futures are still unclear.

However, for some men, this season was just the beginning of their ice hockey experience. Kelly was unsure of what to expect from the Mason team when he joined this year. Now, he’s proud to be a part of such a successful team.

“In the history of the program we’ve never beaten CNU. This is our first time ever,” Kelly said.

While Mason has been seen as the underdog all season, the team has left it all on the ice and beat out their most difficult competition. Kelly reflected that many people did not expect Mason to beat University of North Carolina-Wilmington in the semi-finals, but they pulled out a win in overtime. Mason had never beat UNCW in the history of the program.

The team has also seen great improvements off the ice, which likely contributed to their successful season. Assistant coaches have stepped up the recruitment process in recent years and the team has formed a much stronger bond, which Baker attributes to their weekend road trips and the fact that some players live together.

“We ended up playing more games. We have doubled our game schedule. When we go on our road trips, we spend three days in a row together. So that definitely helped with the off-ice comradery,” Baker said.

These unique attributes of Mason’s program have distinguished it from other club teams and given Hyjek something to be proud of.

“We have worked to transition this from being a team to a program. It’s sustainable, it’s respectable, it’s competitive. We want this to be a strong program that recognizes where we came from and where we will go in the future,” said Hyjek.

The team ranked 15 in the overall league standings after their big win. The top 10 get to move on to the tournament. This is the second year in a row that the team ranked in the top 15.

While Hyjek is sad to leave the team, he recognizes that it can still improve and shine without him.

Coach Hyjek began as an assistant coach. The past six years he has been the head coach of the program, he has helped build it up through increasing recruitment and boosting players’ skills. One of his goals has been to “step up the ladder and improve every year.”

And step up the ladder he has. The team won its first title and has grown to be a successful program — not just a team.

Next season, Morgan Munizza, plans to step into the role of head coach. Munizza has been with the program for five years.

“Nobody is so essential that the program can’t go on without you. I’ve got a great set of coaches that can go on and carry the program. By virtue of what I’ve put into [the program] and the wear and tear on me, I’ve decided it’s a good time for me to leave,” Hyjek said.

How to Celebrate Valentine’s Day on a College Budget