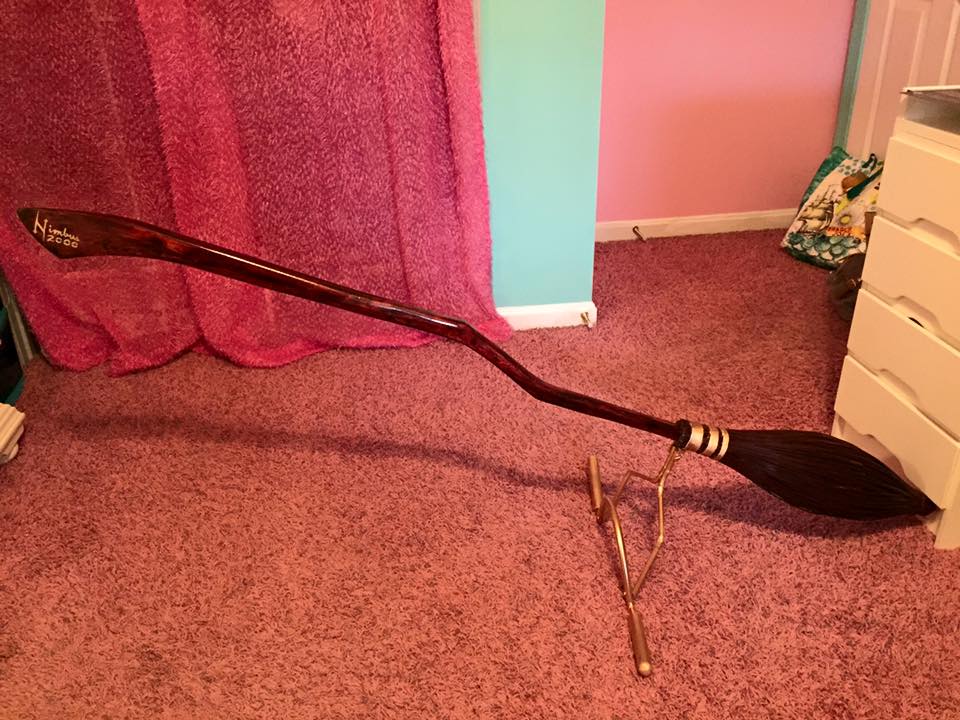 It’s time for a serious question to all the muggles out there: what would you do if you owned a Nimbus 2000? This past Christmas, senior tourism and events management major Shelby Stein received a handmade Nimbus 2000 from her boyfriend, Jared Weissman, a junior civil engineering major.

“When I opened up the Nimbus, I of course was ecstatic,” Stein said. She was surprised after her and Weissman’s families had just finished opening presents together. “I thought he had already given me everything!” 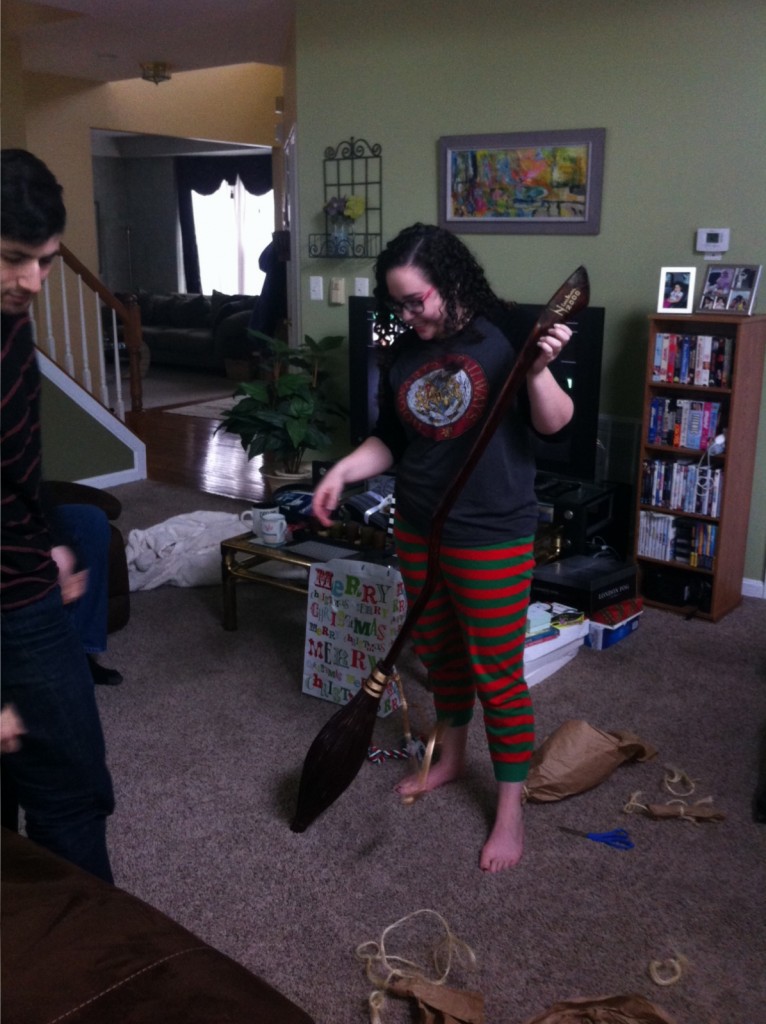 Weissman had brought out a broom-shaped gift wrapped in brown paper and twine — just like in the movie when Harry Potter receives it in the Great Hall from his owl, Hedwig. “Unfortunately, she [Stein] could tell exactly what it was when she saw it,” Weissman said. “It’s kind of hard to hide the shape of a broom when it’s tightly wrapped. She was extremely excited though, and she even cried!”

Weissman built the broom over the course of three weeks, without any magic.  “It definitely would have been quicker, but I was finishing up my semester so I had a lot of studying to do … [P]lus I didn’t have all the material or tools I needed so I had to get all of that together as well,” he said. “I used a [two-by-four-by-eight] piece of pine for the handle and cut it out with a jigsaw and sanded it to shape with a block plane,” he said. The bristles were shaped out of basket reed, which he reinforced with Styrofoam circles to create the shape before spray painting them dark brown.

“I finished the handle with a mahogany wood stain, because in the movie it is made out of mahogany,” Weissman said. “I hand painted the Nimbus 2000 logo on the top. Then I made the kickstand out of plastic rod that I heated [both] in the oven and with a heat gun to shape [it]. … [I] then spray painted it gold. I attached the kickstand with metal L brackets to the broom, and then I finished everything off with a clear polyurethane coat to make it shiny.”

The “Harry Potter” book series has been around since 1997 and the movie adaptations have been gracing our theaters and televisions since 2001.  It is now 2016 and the phenomenon is still as charged as ever. 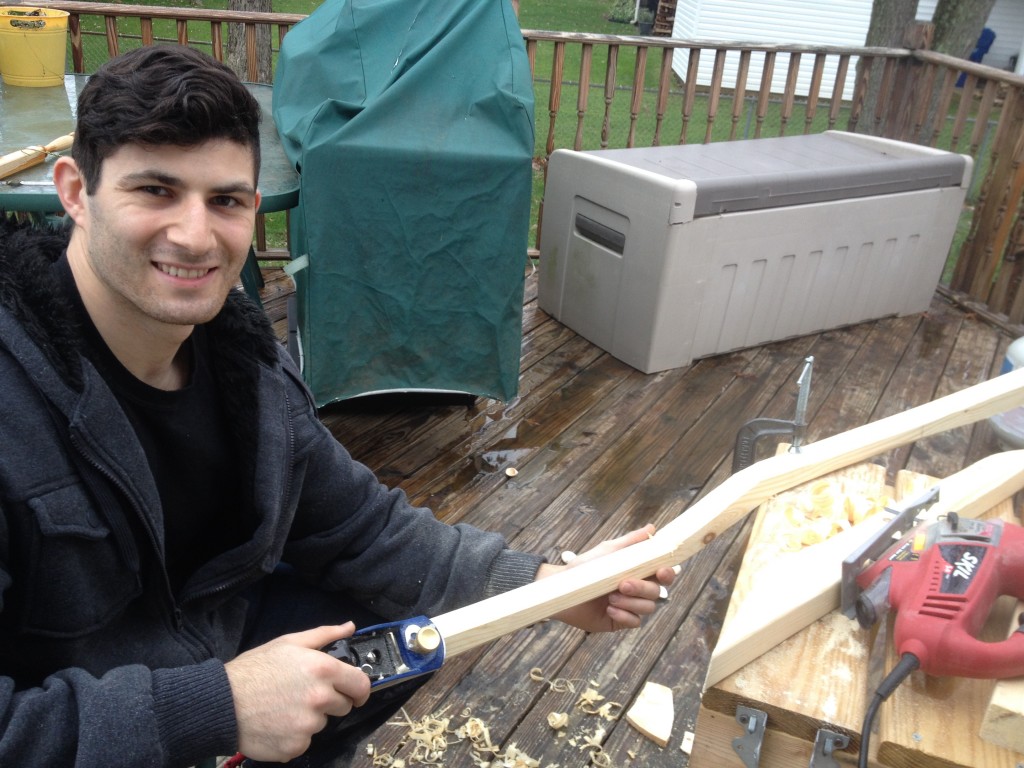 “Harry Potter plays a significant role in my life,” Stein said. She even has a small Harry Potter tattoo on her ankle that spells out the word MAGIC with the ‘A’ as the Deathly Hallows symbol.

“I am constantly on the lookout for unique and rare memorabilia items that I could add to my collection.” She looks on websites like Etsy, eBay and prop collection websites like the Noble Collection. She even has an ongoing list of items she wants to own from the series. “Some of those items include a Mandrake, a chess set, and the ultimate is a Quidditch Chest,” she said.

Weissman explained that Stein has been obsessed with Harry Potter for a long time. “We went to the Wizarding World of Harry Potter this past summer where she bought the Sorcerer’s Stone, Tom Riddle’s diary, and a plaster scroll that says Dumbledore’s Army with [six] wands mounted on it … [belonging to] Harry, Ron, Hermione, Luna, Neville and Ginny.”

But adding the Nimbus 2000 to her collection was the ultimate gift. “An authentic-looking broomstick is pretty much the ultimate prop that I could ever add to my collection. He really did an amazing job on it, so I couldn’t be happier!”

Weissman also got her a Marauder’s Map where he drew in characters’ names and footsteps with invisible ink. “I made a wand that had a black light in it to illuminate the map and reveal the people ‘walking around,’ a framed collection of all 8 movie posters with two film cells for each, and the Triwizard Cup,” he said.

The couple have dated for five years and describe their relationship as fun, adventurous and magical. They are always looking for fun dates, some of which are Harry Potter marathons. “We definitely watch the movies together every once in a while, and he’ll share any funny memes about Harry Potter he comes across online,” Stein said.

She explained that gift giving has become pretty easy for Weissman recently and will be for a very long time because now he knows he can just make her cool prop replicas.

This Valentine’s Day, the couple plans to just take it easy.  “Valentine’s Day isn’t a huge deal for us since we’ve been together for over five years, but last year he surprised me and we went to a cooking class where we made cupcakes and drank champagne, so hopefully he’ll come up with something cute this year. I haven’t brought it up to him to be honest.”