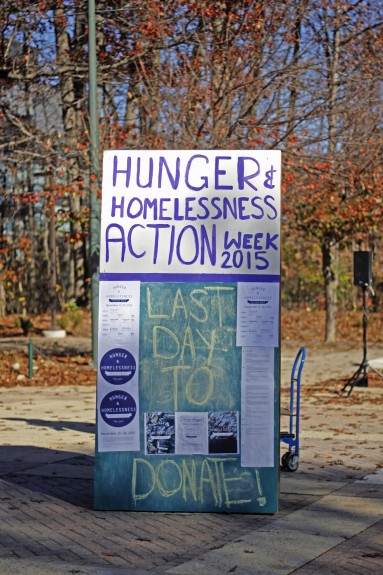 Homelessness is an issue both on campus and in the greater Fairfax County area.

In a survey conducted by graduate student Yara Mowafy in the spring of 2015, half of the 300 participants indicated they knew someone who was currently experiencing or had experienced homelessness while attending Mason.

Mowafy conducted Institutional Review Board research from July 2014 to May 2015 focusing on homelessness on college campuses. She worked alongside Michael Galvin, director of Mason’s Office of Technology and Integration, as they attempted to “examine and assess the prevalence and nature of homelessness and food insecurity on campus,” Mowafy said. The research concluded in May 2015 and its findings revealed several things.

In 2012, Free Application for Federal Student Aid (FAFSA) began asking whether students were homeless and in 2013, 58,158 students indicated that they were homeless.

Although Mowafy does not believe that Mason has a higher homeless population than other universities, the cost of living in this area is higher than most. In 2014, Forbes found that Falls-Church, Loudoun and Fairfax ranked in the top 10 of richest counties in the nation.

Students generally become homeless as a result of being kicked out of the home or choosing to leave the home, according to Mowafy.

“Students that left the home were escaping violence, drug abuse or just the denial of their identity,” Mowafy said.

In cases where the student had left home, was legally dependent on his or her parents or the parents made enough money to be ineligible for federal assistance, the student would not be considered legally homeless, according to Mowafy. Students in this situation were deemed socially homeless by Mowafy, whose research found that the majority of homeless students at Mason fall into this category. Socially homeless students are not recognized by the federal government and are unable to receive federal assistance.

At Mason, there are currently no services directed specifically toward assisting the homeless student population, although a student-run Pop-Up Pantry founded by Mowafy provides food, clothing and school supplies to homeless, food-insecure and financially unstable students.

The Pop-Up Pantry is looking to expand its services to include support for homeless students on campus by utilizing financial support from local community members. This expansion may include housing scholarships, employment assistance and budget management assistance.

“The pantry has recently gained many supporters in the community that are going to be making great financial contributions to our cause,” Mowafy said.

Mowafy has presented her findings at Sacred Heart University; Eastern Washington University; a Clinton Global Initiative conference at Arizona State University; and at the Undergraduate Awards in Dublin, Ireland. Quotes from homeless students are part of her presentation, including a statement from Betty, who goes to Mason.

“I would like everyone to know that this is real. That this is really happening to good people. I’m not a drug addict. I’m not a drunk. I’m a good student. I used to maintain a 3.5 GPA. I’m not lazy, I’m not a loser. I’m trying really hard to make a better life for myself. And I would like the administration to know that we’re out here and we need help. And we deserve it. Just because we had bad upbringings, or not so good parents and we didn’t have that support, doesn’t mean that we deserve to continue that life when we’re trying to better ourselves,” reads Betty’s quote.

Craig Willse, assistant professor of cultural studies and author of “The Value of Homelessness: Managing Surplus Life in the United States,” said the university could do more to ensure the success of its homeless students.

“[Mason] likes to think of itself as a diverse and inclusive community, but you know you have to do more than just open your doors, you have to make sure that people have the resources they need to succeed,” Willse said. “As a university we want all people to be able to access a college education and that means we have to support all students.”

She specifically mentioned Michigan State University, the Community College of Denver, Kennesaw State University and Western Michigan University as schools that have implemented some combination of the above methods in order to support their homeless students.

“Each university tackles this issue in their own way, we’ve seen multiple models that have all been very successful in supporting homeless and food insecure students,” Mowafy added.

Nov. 15-20 was Hunger and Homelessness Action Week (HHAW) at Mason and at other colleges around the nation. Oxfam America, Catholic Campus Ministry, ARISE Ministry and other organizations planned events including a week-long food drive, Brown Bag Sunday, a film screening of “The Homeless Home Movie” and a Hunger Banquet, among others.

“We are hoping that we can empower students, faculty and staff on campus as well as community members to engage in charitable work. We want everyone to be aware of the circumstances that some of us are facing and how they can support these populations and ensure that they are successful in their lives,” Mowafy said.

She challenged students to go out and experience what it’s like to be homeless for a day.

“I think the reason a lot of people don’t go out and help is that they haven’t experienced really what it is to be in a situation like this,” Peñafiel said.

HHAW mainly focused on the homeless population on campus, although some events during the week also aimed to help people experiencing homelessness in Fairfax County and Washington, D.C. 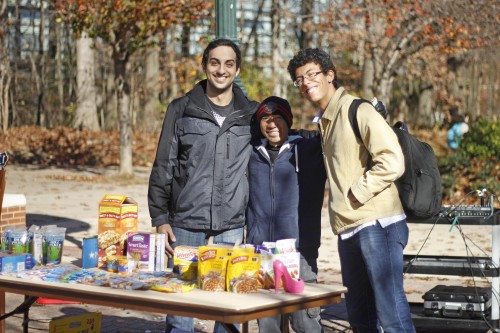 Fairfax County, the fifth richest county in the nation, has the second-highest homeless population in the Washington metropolitan area, according to the Metropolitan Washington Council of Governments’ Homeless Services Planning and Coordinating Committee. In January 2015, there were 1,204 people who were legally homeless in this region. Washington D.C., a mere 20 miles from Fairfax, reported having 7,298 people who were legally homeless.

Sharon Bulova, chairman of the Fairfax County Board of Supervisors, explained how the county has addressed this issue over the past several years.

“In 2007, the Fairfax County Board of Supervisors adopted a goal to end homelessness in 10 years. We adopted a community developed Implementation Plan the following year. Since then, a Governing Board and a small county office were established to coordinate efforts among our private partners. To date homelessness has been reduced by 30%. There will always be occasions where individuals experience a crises. Homelessness, however, should be rare, brief and non-recurring. Volunteers are always needed and welcome. Working together I know we will meet our goal for every child, family and individual to have a safe and permanent place to call home,” Bulova wrote in an email.

Since Fairfax County committed to a 10-year plan to prevent and end homelessness, the homeless population has decreased by 34 percent, from 1,835 people to 1,204. According to the U.S. Department of Housing and Urban Development (HUD), Fairfax County received $9.2 million in 2014 and $6.7 million in 2015 from HUD.

Legislators have primarily addressed this issue by increasing the amount of permanent and affordable housing.

“We saw that what we were effectively doing was just managing the homeless population,” Barnett said. “They were shifting from one shelter to the next, from one temporary housing program to the next. To actually end homelessness you need to address the heart of the issue being housing. It wasn’t until we started to focus on permanent housing and housing first that the numbers started to actually go down. … Shelter is still important but it’s not in and of itself sufficient to end homelessness.”

Fairfax County has adopted a Housing First philosophy in place of its previous Housing Ready philosophy, according to Barnett. The Housing First idea means, simply, providing those who are homeless with permanent housing first, along with other services. Fairfax County has shifted funds from homeless shelters to creating permanent housing, according to the OPEH website. For example, the Emergency Solutions Grant, provided by HUD, has been reallocated to pay for homelessness prevention and rapid rehousing assistance since 2010.

Another federal resource, Continuum of Care funds, has been used primarily for permanent housing over the past few years. After shifting these funds, OPEH has found that it is less expensive to provide housing than shelters, according to Fairfax County’s website.

Barnett believes that accomplishing the goal to end and prevent homelessness by 2018 will be difficult to reach, and he hopes that the current number will be reduced by at least half by 2018.

“The most difficult thing about homelessness is that there are so many variables coming into play: you have mental and physical health; you have income; you have housing, education [and] employment,” Barnett said.

According to Willse, 10 year plans similar to Fairfax County’s across the country have been unsuccessful. He believes this is because they are not addressing the underlying factors of homelessness.

“We can’t just think about, ‘How do we take this person off the street and move them into housing?’ Although we have to do that, we need to think why they’re there in the first place…We need a radical transformation of social and racial inequality, and it’s not something you can do in 10 years,” Willse said.

OPEH has partnered with a number of non-profits and other government agencies to achieve its goals.

“The Office to Prevent and End Homelessness does not provide direct services ourselves. We contract and partner with many local community based non-profit organizations that operate the shelters and do prevention and rehousing services, and they’re essential to accomplishing this goal,” Barnett said.

“It’s not the homeless, it’s not homeless people, it’s people who are experiencing homelessness. Just like someone who’s sick, you don’t call them the sick or sick people. You respect them for individuals,” Barnett said.

Peñafiel, the student who helped organized HHAW, also believes compassion can go a long way and that the stigma surrounding homelessness is one of the biggest barriers to overcome.

“We need to remember that although it’s important to help out with food and money if we’re able to, it’s important to just love them because they are our family. … They tell you that what they really want is love, a conversation, a smile, acknowledgement that they’re humans too,” Peñafiel said.