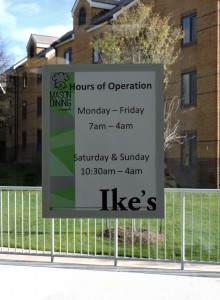 Ike’s operating hours changed for Family Weekend then reverted back to the original schedule, seen above. (Sarah Kladler/Fourth Estate)

On Sunday, Oct. 18, Mason Dining announced that the hours of operation at Ike’s and Pilot House would be changing. Students on the Anytime Dining meal plan were upset about this change, but a misunderstanding was later revealed.

The original announcement stated that Ike’s would be opening later on weekdays, changing its opening time from 7 a.m. to 10 a.m. and closing two hours earlier, at 2 a.m. rather than 4 a.m.

Pilot House’s hours were also cut, changing from opening at 5 p.m. to 10 p.m. while continuing to close at 2 a.m.

Students were upset about these changes. A petition was posted on Change.org, proclaiming, “We [the students] have the power to change the dining hours back to what was promised when we paid for our meal plans.”

The petition was quickly circulated among social media, eventually gathering over 500 signatures. On October 20, an update to the petition was put up, claiming that “Mason Dining has announced that Ike’s is NOT changing its hours.”

There was only one complication: the changed hours at Ike’s were not intended to be permanent.

Mark Kraner, executive director of Campus Retail Operations, clarified that the posted “change in hours” at Ike’s was only meant to be a temporary switch.

“It was because it was Family Weekend, so the folks from Family and Alumni Relations asked us to change the hours for that morning. That was meant to be the only change in the hours at Ike’s,” Kraner said.

However, the petition was correct in regards to the changing hours at Pilot House. Kraner said that Pilot House’s original, extended hours were the result of projected overcrowding at Southside.

When reviewing the number of students signed up for Anytime Dining in early August, Kraner and his team projected that there would be too many students eating dinner at Southside and the facility would not have room for everyone. In an attempt to rectify this, Dining chose to open Pilot House earlier, at 5 p.m., to provide an alternative dining space for students.

However, Kraner and his team soon realized that their estimation of the number of students on the Anytime Dining meal plan was too high. After observing in mid-October that the extra space provided by Pilot House at dinner time was not needed, planners decided to trim Pilot House’s hours and reallocate funds to improving the quality of the food at Southside.

“We didn’t want to be stealing funds from Southside to provide extra space that wasn’t really needed, so we decided to make the switch back,” Kraner explained.

However, some students, such as the anonymous student who created the Change.org petition, believe that if Pilot House’s hours are being shortened, the price of Anytime Dining should be cut in response. Kraner, on the other hand, insisted that any money being saved by measures like this is being used to improve food quality at the dining halls.

“The other day I was in Southside, and I had shrimp and grits. They were beautifully done, and you don’t get to go to many dining facilities and find shrimp on the menu at lunch, but we were able to put it there because we’re able to put more money into the food program,” Kraner said.

Tyler Raffensperger, a sophomore computer engineering major, agrees with the sentiment that shorter hours can often result in higher-quality of food, noting that while “Southside used to be 24 hours, but when you would get there late in the night, the food kind of tasted like it was made out of mud.” By keeping the hours of these facilities as economical as possible, Kraner and his team hope to avoid this problem.

Some students, however, are still unsatisfied with Pilot House’s new hours. Freshman criminology major Gina Rosa, reported “waiting 15 minutes in line outside of Pilot House at 10 o’clock just to get some mozzarella moons.” Kraner  said Dining would look into the compliant and attempt to mke necessary adjustments.

While the petition did not directly affect Ike’s hours changing back, Kraner stressed repeatedly that student feedback is very important to Dining.

One way Dining receives feedback is through the Student Dining Board, a division of Student Government’s University Services committee. According to Greg Warren, one of the interim chairs of this committee, “We meet with Sodexo administration every other week… It’s really designed to be a direct, short-term communication between students and Sodexo for any issues that need to be addressed, as well as functioning as a type of planning committee.”

Kraner said Dining discusses a wide variety of issues with this board.

“We’re always talking to the [Student Dining Board]…Everybody’s represented there, and they voice their opinions, everything from the strategic decisions to ‘You ran out of Ranch dressing last week!’” Kraner said.

“We do monitor all the social medias…Sometimes, the students say something, and we sit there scratching our heads wondering why we didn’t think of that ourselves, and we pull together to try to make that happen,” Kraner said. He cited this year’s addition of Simply To Go in SUB I as an example of an addition to Anytime Dining that was inspired by student demand.

“We heard from students that were saying they didn’t have enough time to get from [class] to Southside to get something for lunch, so what do we do to add something positive and add a service that students were in need of? That’s what created something like Simply To Go,” Kraner said.

Kraner also mentioned an upcoming addition to the dining halls that he thinks will be popular among students.

“We were talking with some students, and they actually want to do a macaroni and cheese bar, where you have the noodles and the cheeses, but what are the things we can put in it and run it through the oven to give it that nice toasty crust on top?” Kraner said. “And so I think you’ll see that one pop up on [an upcoming] Friday.”

From your plate to the atmosphere