Sporting painted faces and ripped clothing to look like zombies, Student Power members marched and chanted to raise awareness about the student debt crisis affecting Mason and other universities.

“Since Sanders supports free higher education, we hoped to connect with students who were there to see him, assuming they had similar interests in free higher education,” President of Mason’s Student Power chapter, Samantha Parsons, said.   “We wanted to connect those students to our work so they could get involved in grassroots organizing around issues that affect them every day.” 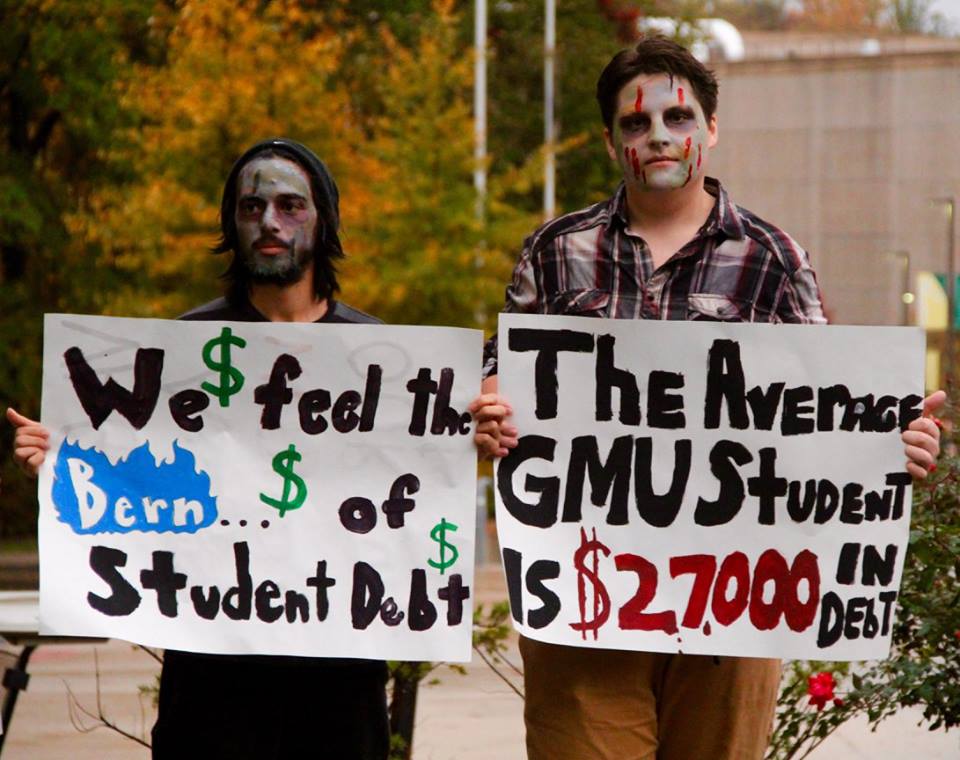 Student Power used this event as an opportunity to highlight how Mason and the Virginia General Assembly have not addressed student debt as heavily as Sanders has.  “While Sanders actively advocates against student debt, universities and policy makers in Virginia find it acceptable to balance their budgets on the backs of young people,” Parsons said.  “This disregard for student’s places them and their families under significant financial strain, and it results in the accumulation of large sums of debt that will follow students for years to come.”

According to Parsons, the average college debt for an individual is around $30,000 nationally, and it is close to $26,000 for Virginia students.

“A lifetime of crippling debt is a very scary thing that we all should be afraid of,” said senior Kalia Harris, a student leader of the Mason chapter of the Virginia Student Power Network (VSPN).  “We want our universities and state representatives to follow Sanders’ lead and prioritize students by developing a detailed plan for free higher education in the Commonwealth.”

The average debt for Mason graduates is $27,000.  Additionally, Virginia is listed as having the fifth most expensive public higher education in the nation.

“Tuition has been rising every year here at Mason and our representatives in Richmond continue to cut the budget for higher education,” Parsons said.  “These rising costs have resulted in the accumulation of large sums of student debt for Mason graduates, often forces students to reevaluate whether or not they can return to school each year, and keeps low-income students off of campus entirely.”

Freshman Amanda Montalvo says she has experienced student debt struggles firsthand.  “The current educational system is not here to support people like me, a first generation college student,” Montalvo said. “I appreciate that Bernie Sanders recognizes that education has become only a privilege for those who can afford it, and I wish George Mason and our state legislatures would wake up to those realities as well.”

Mason’s Student Power is a network of progressive students and activists who focus on promoting social justice initiatives like creating a more affordable and accessible higher education system.

“Student Power does not believe in putting all of our faith into electing a single representative to provide the change we need to see, we know powerful and sustainable change comes from the bottom-up,” Parsons said.  “Now that Sanders is no longer on campus, we hope the students we met will put their energy into working with us to prevent rising tuition at Mason and achieve free higher education in the Commonwealth of Virginia.” 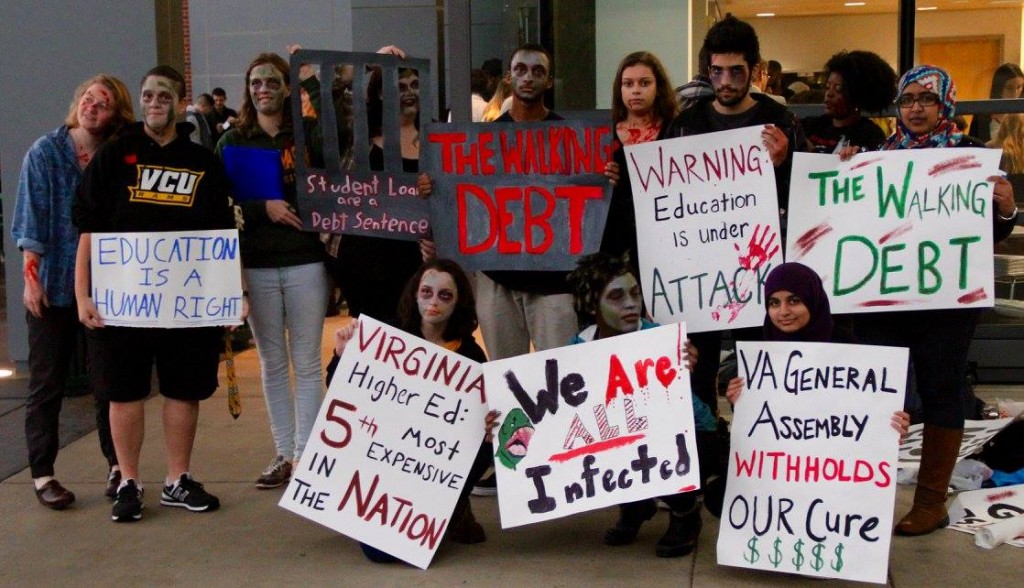 Mason’s Student Power is working toward a tuition freeze at Mason, free higher education in Virginia and greater social justice advocacy among Mason students.  “We do not think student debt is acceptable and we believe we have the power to make higher education affordable and accessible for everyone,” Parsons said.  “We are strong advocates for fighting for what we believe in, and I hope our action helped inspire students to use their voices, stories, and passions to challenge systems of injustice.”

Other Student Power chapters around the state also held ‘Walking Debt’ marches on their campuses after the Sanders Town Hall event that day to protest Virginia’s student debt crisis.

Last spring, Mason’s Student Power advocated for the creation of a scholarship fund to provide a safety net for students who are most effected by tuition increases.  These students typically include first-generation, low-income, undocumented and homeless students.  “We hoped this would be a first step towards ensuring equitable access to higher education at Mason and prioritize socioeconomic diversity on our campus,” said Parsons.

The group was able to successfully open a scholarship application recently called Stay Mason Student Support Fund.  “This fund is meant to support students at risk of leaving Mason due to financial hardship.  It is not a loan and will not have to be paid back,” said Parsons.

Student Power will be participating in the Peace Corps’s National Day of Action by joining the Million Student March in Washington, D.C., November 12 and hosting an open-mic night at Mason on November 17.  Students can stay updated on these events by following Student Power on Facebook.

Student Power meetings are held every Tuesday at 5 p.m. in the conference room of the Office of Diversity, Inclusion and Multi-Cultural Education in SUB 1.  “We are working towards real solutions that are going to have lasting impacts on our community, and it is fun, powerful, and rewarding to be a part of something so revolutionary on our campus,” Parsons said.