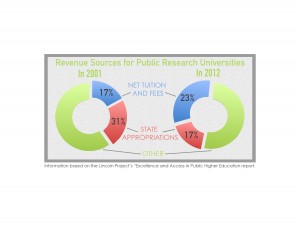 As the 2016 presidential campaign continues, some candidates have begun highlighting their plans for reforming higher education. Candidates from both parties — including Hillary Clinton, Bernie Sanders, Marco Rubio, Chris Christie and others — have proposed plans to address the increased cost of higher education.

All three presidential candidates on the left – Bernie Sanders, Hillary Clinton and Martin O’Malley – include higher education reform as an issue to be addressed, according to their campaign sites.

Bernie Sanders plans to make tuition free at public colleges and universities. He would lower student loan interest rates to about 2.37 percent and allow students to refinance their student loans to lower interest rates. Sanders would also require public colleges and universities to meet 100 percent of students’ financial needs; permit financial aid to cover room and board, books and living expenses; and triple the federal work-study program.

Khalfaoui agreed with Sanders’s plan to make tuition free at public colleges, and added, “Free tuition will make us like some European countries who already have public universities free of charge.”

Freshman Sandra Simon, a biology major, was also in support of Sanders’s plan but does not think it’s a realistic goal for his presidency.

“I like [Sanders’s] ideal for higher education, but I don’t know if he can accomplish that in 4-8 years, because it’s such a dramatic shift,” said Simon. “I think we have to take baby steps.”

Hillary Clinton’s New College Compact plan states that no student will have to borrow to pay for tuition, books and fees to attend a four-year public college in their state. In addition, Clinton proposes that students work 10 hours a week to contribute and families make a realistic contribution too. Federal grants and lower interest rates would be provided to states that commit to the New College Compact and in return for states maintaining their current level of higher education funding. Loans may be refinanced at current interest rates and an income-based repayment program would be available.

“No way I’m working 10 hours a week,” Simon said in reaction to Clinton’s plan. “If you’re trying to maintain a really good GPA, it’s really hard to complete your homework, classwork, and study for your exams. You can’t expect me to work 10 hours a week, especially if someone commutes, they’re in a sport, or want to partake in other extracurricular activities.”

Martin O’Malley’s plan would allow Americans with student debt to refinance their student loans at lower rates and includes an income-based repayment program. He plans on making tuition at public universities fall in line with state median income and would use matching federal grants to encourage colleges to increase on-time graduation rates, improve education quality and provide direct aid for students in the most need.

In the Republican Party, Marco Rubio, Chris Christie, John Kasich, Carly Fiorina and Mike Huckabee also include higher education reform as an issue, according to their campaign sites.

Marco Rubio wants to increase the transparency of higher education information, including various statistics, and make it available for students and families online. He would also establish an income-based repayment system as the universal repayment method for federal student loans and allow graduates to consolidate existing loans under the new system. Rubio would allow students to apply for “Student Investment Plans” from approved investors to finance education without the burden of loans.

Chris Christie plans on making higher education more accessible for all by refocusing federal student aid to those at the bottom and expanding alternative funding, like income-share agreements, where students pay a percentage of their future income for a defined period of time in exchange for private financing, and programs to pay down student debt in exchange for community service. He also believes that colleges be more transparent about costs, providing cost itemization for tuition so students know exactly what they are paying for.

“I like how Republicans [Rubio and Christie] want to make tuition costs transparent,” said Simon. “They don’t have say dollar for dollar where everything goes, but they can say 50 percent goes toward running facilities, etc.”

Lower-polling candidate John Kasich plans on keeping college affordable through a 100 percent performance-based funding formula that incentivizes universities to graduate more students, while Carly Fiorina would address the issue of higher education by returning the free market to the student loan industry and enable as much choice and competition in higher education.

One factor responsible for increasing costs in higher education is states’ cuts in funds over the past decade, with the most drastic cuts after the Great Recession in 2008.

As the “balance wheel” of state budgets, funding for higher education fluctuates depending on the state of the economy, according to the Lincoln Project. The report said institutions of higher education “possess a perceived capacity to absorb cuts” as they can slow the growth of employee pay, receive revenue through different sources and can alter program elements to reduce spending. Thus, during periods of slowed economic growth, such as the Great Recession, states cut funding for higher education as opposed to K-12 education, Medicaid, and Corrections (prison funding), according to the report.

During these times of reduced state funding, public research universities have relied more heavily on federal, state and local grants and contracts; tuition and fees; and private donations. In 2012, these grants and contracts were the highest source of revenue for public research universities. As for the states’ contributions, that has decreased from providing about 31 percent of university budgets in 2001 to about 17 percent in 2012, according to the Lincoln Project.

“They [the education system] sell college as an investment, meaning you won’t get the payoff for a while,” said Nicholson. “As tuition rises, this gets more and more daunting. All of the work we’ve put into making kids want to go to college is being hurt by the sheer cost. People debate more than ever if college is worth it at all. It doesn’t necessarily need to be free because this isn’t that kind of country, but costs are spiraling out of control.”