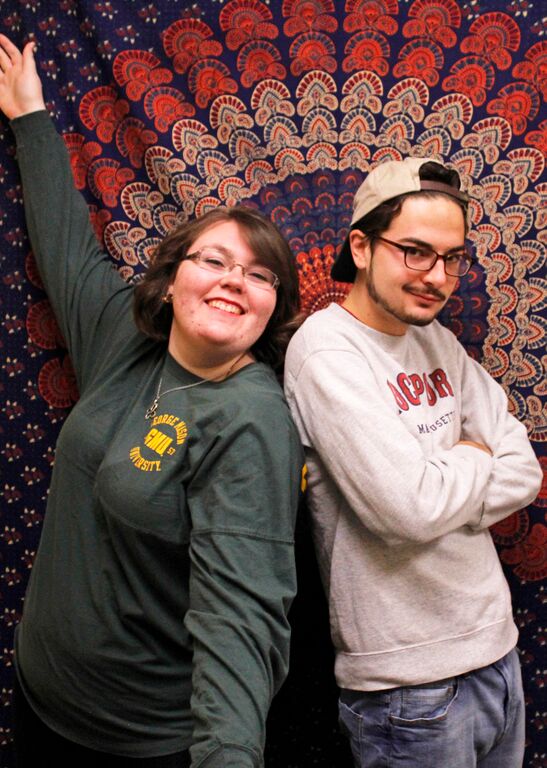 The purpose of the Well-Being Team is to assist and spread the word about Goal 7, one of the twelve Goals for Students outlined in Mason’s 2014-2024 Strategic Plan. According to the document, Goal 7 is to help Mason “become a model well-being university” where students can thrive. The Well-Being Team hopes address this aim by creating programs, spreading awareness and showcasing the many sides of well-being.

Tilleman and Murray created the Team in hopes of providing well-being opportunities they believed were lacking for students.

“If we are a well-being university and are doing things for faculty and staff and we are telling incoming freshman that we are a well-Being university, but we don’t show up that way for our students then that is an issue for me,” said Tilleman, a junior conflict analysis and resolution major. “So with the well-being team that is the main goal, to make well-being accessible to students.”

Tilleman’s passion for well-being ignited after she discovered the many facets of the subject. Previously, she struggled with the concept of well-being and some of its more popular practices.

“I thought it was lame and I couldn’t really meditate,” said Tilleman. “But once I learned about other facets like self-compassion, gratitude, and the idea of being able to empathize with other people, I started to care a lot about well-being.”

In order to bring her passion to life, Tilleman approached Murray with a new idea for a well-being organization on campus. What began as a small idea quickly turned into something much bigger.

“AnnaMarijka came to me with this idea and I told her that this is bigger than what you are making it,” said Murray, a sophomore integrative studies major. “So we just stayed up all night working on the idea. We continued working on it that week to make it more presentable so that we would be able to show that this is going to create a well-being culture on campus.”

After countless meetings, hard work and perseverance, Tilleman and Murray were notified that their dream to form a Well-Being Team was going to become a reality.

“We got the call that it was going to happen and we were super stoked,” said Murray. “We couldn’t believe it. And since then we’ve just been kind of building it from the ground up.”

Located in the Office of Student Involvement (OSI), the Well-Being Team consists of Co-Directors Tilleman and Murray, five student coordinators and various team members. Lauren Long, director of OSI, assists the team in accomplishing its goals and serves members with guidance along the way.

“As a departmental organization within Student Involvement, my role is to advise the group and assist in building a strong foundation for the group to flourish,” said Long. “I provide guidance, leadership training and development, learning around event management and team development as well as serve as a liaison to the Center for Well-Being and Mason staff and faculty committed to moving this message forward.”

Although the team is just getting started, Long is impressed with its early successes and the great interest it has attracted in a short amount of time.

“Two students came to me with an idea and passion and it was contagious. I wasn’t sure if it would catch on but quickly word spread,” said Long. “We held a competitive application process for the coordinator positions. We already have a list of students interested in joining the team and many stakeholders reaching out to partner with us. It is clear that the vision the students had is what our campus needed.”

Focusing on aspects like creativity, gratitude and happiness, the Well-Being Team hopes to highlight the lesser-known aspects of well-being.

“When you see well-being, you see a stigma attached to it like yoga and meditation but there are so many other facets to it that don’t get touched on or acknowledged,” said Tilleman. “So the Well-Being team is here to break that stigma of things that only white women in their 30’s or 40’s do. We want to show that it is something everyone can tap into.”

Because the team’s activities cover a diverse range of topics and Mason is a diverse campus, the team believes its events will offer something for everyone. Members encourage students to get involved not only to learn well-being practices for their own benefit but also to create a positive culture on campus.

“People should get involved because it can be a part of them leaving their legacy at Mason,” said Tilleman. “We are new so any type of contribution you make to this will help students down the road.”

In the coming months, the team will host numerous well-being events, including monthly mindfulness programs. This spring, the team will begin giving presentations in classrooms and meeting with other organizations to facilitate workshops on well-being.

“We are also doing Well-Being Day, which is our biggest event and is part of Spring into Well-Being,” said Tilleman. “That day will just be a big celebration and mental health day for the campus. It’s going to be kind of like our signature.”

Tilleman and Murray feel that these events and activities will promote students’ personal growth and deepen their understanding of how important well-being is to their lives.

“We all are going through something. We all have our daily troubles and we all have stress,” said Murray. “So what’s great about well-being is that it is accessible in so many ways. And if you can show up in different ways to show students that it’s okay and we can show you ways to be less stressed or help you with your problems and be resilient, I think that is something that is invaluable.”

Tillman anticipates big things for the organization and looks forward to leaving behind a strong legacy after she graduates.

“I’m excited to see how it comes to life,” said Tilleman. “Obviously I won’t be here forever so I won’t be able to see what it turns out to be but I love being able to leave that legacy. And also being able to see my team members and coordinators grow into strong leaders.”

Murray hopes the team will assist in sparking a change within the university that will ultimately strengthen the Mason community in the long run.