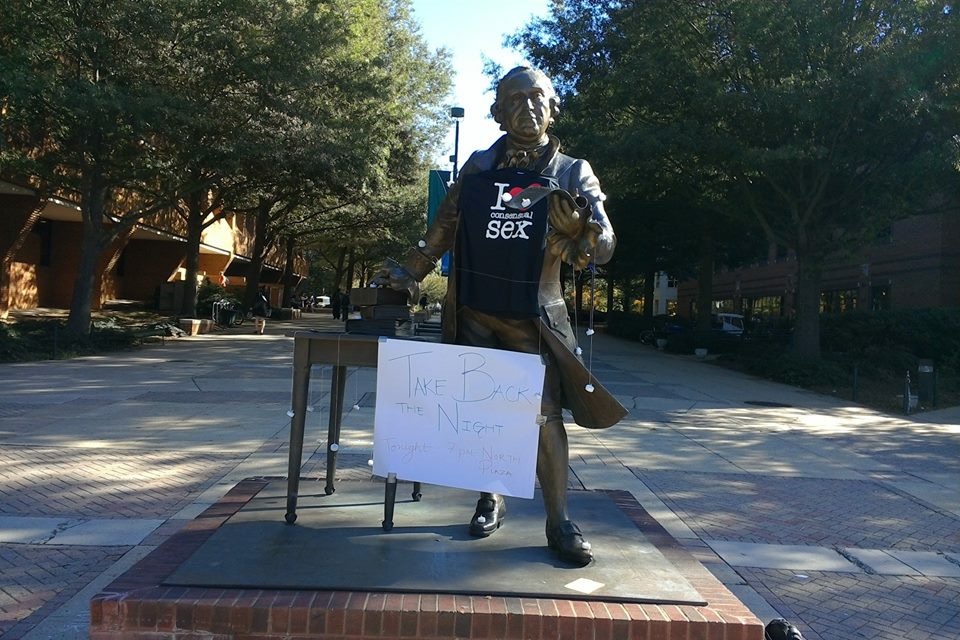 The evening of October 6, Mason students could hear chants coming from a gathering at North Plaza. The leader of the crowds would shout “Take back!” to which the crowd would respond, “the night!”

The chants were varied, but the message of empowerment remained the same. Posters were paraded, and participants carried symbolic flames to show their support for the victims and survivors of sexual assault and violence.

Take Back the Night is an international event that supports bringing an end to sexual and domestic violence and showing support for victims. Every year, the women and gender studies department at Mason holds Take Back the Night as part of Turn Off the Violence week.

Held during the first full week of October, Turn Off the Violence week kicks off Domestic Violence Awareness month.

“[Domestic Violence Awareness Month] is like other months we have during the year around particular aspects around someone’s identity,” said David Corwin, a graduate student in the women and gender studies and English departments. “It’s supposed to be a month of activism and reverence for people who are victims of sexual assault and domestic violence. A lot of different organizations across the country do different things for it, but it’s a nationally recognized month.”

Take Back the Night is sponsored by the Wellness, Alcohol, and Violence Education Services (WAVES) office, as well as the Feminist Student Organization and Student Government.

This event shows support for people who are victims of sexual and domestic violence. The event also helps attendees understand the impacts of these issues and become better allies to victims.  The event does this through leading the march and providing a safe space for victims to tell their own survival stories. Attendees of Take Back the Night found the personal accounts to be one of the most powerful parts of the event.

Ilyanna Espiritu, a senior film and video studies major, said she was moved by hearing about students’ journeys.

“It makes you see it [as] more real,” said Espiritu. “Especially having people talk about their experiences and then seeing how strong they have become. You know, you hear about some things, horrible, but it ends on a positive note, so that was really good.”

Some students used poetry to share their stories. “I really like the spoken word [poems],” said Anna Horlbogen, a sophomore social justice and human rights major with a minor in non-profit studies. “I think it’s really empowering to hear the stories from the women who have survived.”

The march that followed the narratives helped “everybody unite and support … survivors,” according to Espiritu.

Corwin believes the main goal of Take Back the Night is to empower victims.  “We have men, women, gender non-conforming, gender fluid people that all give narratives,” Corwin said.  “It’s meant to be an empower[ing] event, and many people, it’s the first time they’ve publicly spoken about their experiences.”

Though the main purpose of the event was to empower the victims of domestic and sexual violence, attendees said advocacy and activism were important components as well.

For Horlbogen, the event raised more awareness of the actual problem. “Even just watching people walk by like really confused and stop for a second, I think that’s huge,” said Horlbogen. “Them just hearing the stories, their eyes opened for the first time to the things going on right here.”

Corwin added that the event was also held to highlight the issue of sexual violence at Mason in particular.  “We have the pledge to eradicate sexual violence on Mason’s campus, so it centers with that theme,” he said.