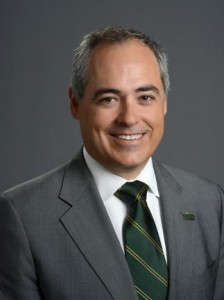 Mason’s president Ángel Cabrera earns the 29th highest salary among United States public university presidents, according to the Chronicle of Higher Education. Cabrera had a base pay of $536,049 and earned $615,759 in total benefits in fiscal year 2014, the Chronicle reports. In June, the higher education-focused publication released its annual list of the incomes of public university presidents. Cabrera earned the second-highest amount in the state, following Virginia Tech’s recently retired president Charles W. Steger, who received $745,195 in total benefits. Virginia Commonwealth University’s president Michael Rao ranked 41st on the list with $553,155 in total benefits, and University of Virginia’s president Teresa Sullivan came in 65th with $494,700. Cabrera saw a significant jump in his ranking from the last fiscal year when he was ranked the 70th highest-earning public university president in the United States. In that year he earned a base salary of $499,194 and a total compensation of $559,085.

Information reported by the Richmond-Times Dispatch was used in this article.

Getting Involved on Campus