This article was first published in the April 20 issue of Fourth Estate. 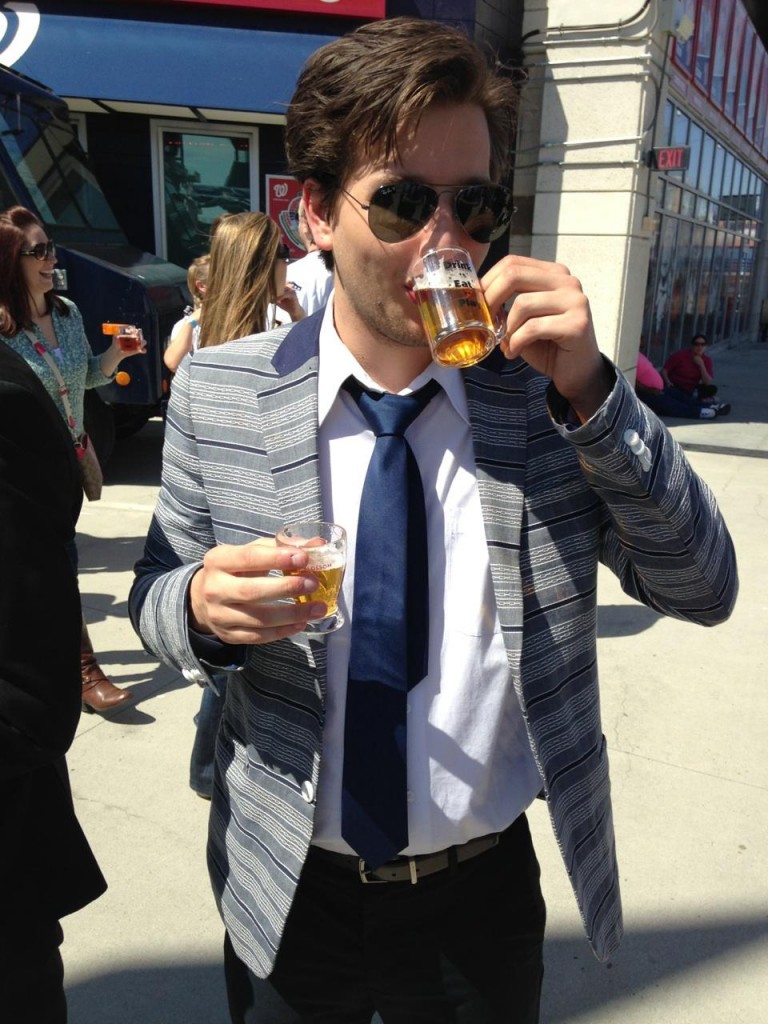 Connor at the DC Beer Fest.

This past weekend marked a slew of events celebrating the annual bloom of Washington D.C.’s Cherry trees, however in the nation’s gridlocked capital, the trains were far from on time and Murphy’s Law ruled without contest.

The day began with a dull trudge to the cue bus and a slow crawl to the Vienna Metro. The slow hum of the track only hampered by the clamor of commuters, tourists, beer nuts, Capital’s fans and cherry blossom enthusiasts; waiting to be packed like sardines in a tin can. The only respite from the stale air of the metro underground being the warm spring sun on the other end of that tunnel; that promised land that was the beer festival was in our grasp, but far from in our sight.

The city was bustling with activity in perceived symmetry in the blocks that surrounded the Navy Yard metro station, leaving my cohorts and falling in step with the coordinated pageant of drunkards we thought would soon become our best drinking companions. The reality was far flung from that happy thought. As we arrived and cued patiently to enter the calamitous gathering in the parking lot of National’s park we felt as though we had finally reached our destination. Unfortunately met with the chastisement and scorn, we were banished from the cherry blossom beer festival happily located just next door to the D.C. beer festival held within the park. This may seem like the mistake any drunk whether, amateur or highly functioning would make, but after speaking with several Mason students, the issues surrounding the proximity of the two festivals seemed an all too common theme.

“They could have handled that better, because after you get off the metro the first thing you see is the cherry blossom one, and so even is you are going to the other one, you see that and you are like… oh my god I’m here!” said McKenzie, a Senior at George Mason who intended on attending the beer festival, “There wasn’t a whole line going into the park from the metro. It wasn’t until later that we heard people say ‘This is not the D.C. Beer Festival!’” McKenzie’s was not the only tale of lost time and faulty tickets. Sam Harman’s experience is one of greased palms, intrigue and swashbuckling. As he arrived at the entrance to the Cherry Blossom celebration his logical assumption was that he too had finally reached the D.C. Beer Festival after the arduous metro ride.

“I approached a security officer and said, ‘hey I am with a group of close friends, and two of us don’t have tickets’ so I figured I could find a way to fanegal my way in,” Harman said.  “He directed me to a coordinator and I approached her, knowing that she gets asked this a lot, if she could let two of my friends in. Cutting straight to the chase she asked, ‘Do you have cash, eighty bucks for the both of them.’ She brought us past the check in, past security and in one minute had stamps on our hands. We walked in, and it wasn’t until later that we received a phone call from the rest of our group saying we were at the wrong festival. I looked down at my cup, saw it said Cherry Blossom Festival, and got the hell out of dodge.”

These are just two of the multitude of D.C. Beer festival-goers who were left waiting, wanting for the districts best micro brews. One line turned to another as the walking wounded of the ticket snafu ate precious time better spent sampling Pilsners, Porters, and pale ales for those holding tickets to the festival’s early session. Once finally inside, the selection was absolutely stunning. With booths from local favorites like Wild Wolf, DuClaw, Devil’s Backbone,Port City, Alewerks, and Hardywood, as well as perennial award winning breweries like Victory, Evo, Lagunitas, and Goose Island. It was a phenomenal experience, and perfect way to usher in a new spring season. The only issue anyone could take with the D.C. Beer festival was finding its thanks to the wonderful people in charge of scheduling at National’s Park.