The Real Food Challenge at Mason has recently finished their calculations of how much of Southside’s food is considered “real” and the number might shock you.

The Real Food Challenge is an organization that campaigns for local, fair-trade, ecological and humane food to be provided on college campuses all over the U.S. according to the Mason chapter’s Facebook.

So far, the Mason RFC team has researched how much real food Southside offered and discovered the number was 5%. The foods from Southside that were accepted as real foods were local and organic tofu, mushrooms and milk, coming from Harrisburg Dairies in Harrisburg, Pa. The coffee offered at Southside, Ike’s, The Globe and in the convenience stores was fair-trade too, as well as some of the fruit.  Ross said Mason Dining has also begun to serve micro-greens grown in the President’s Park Greenhouse in the dining halls. 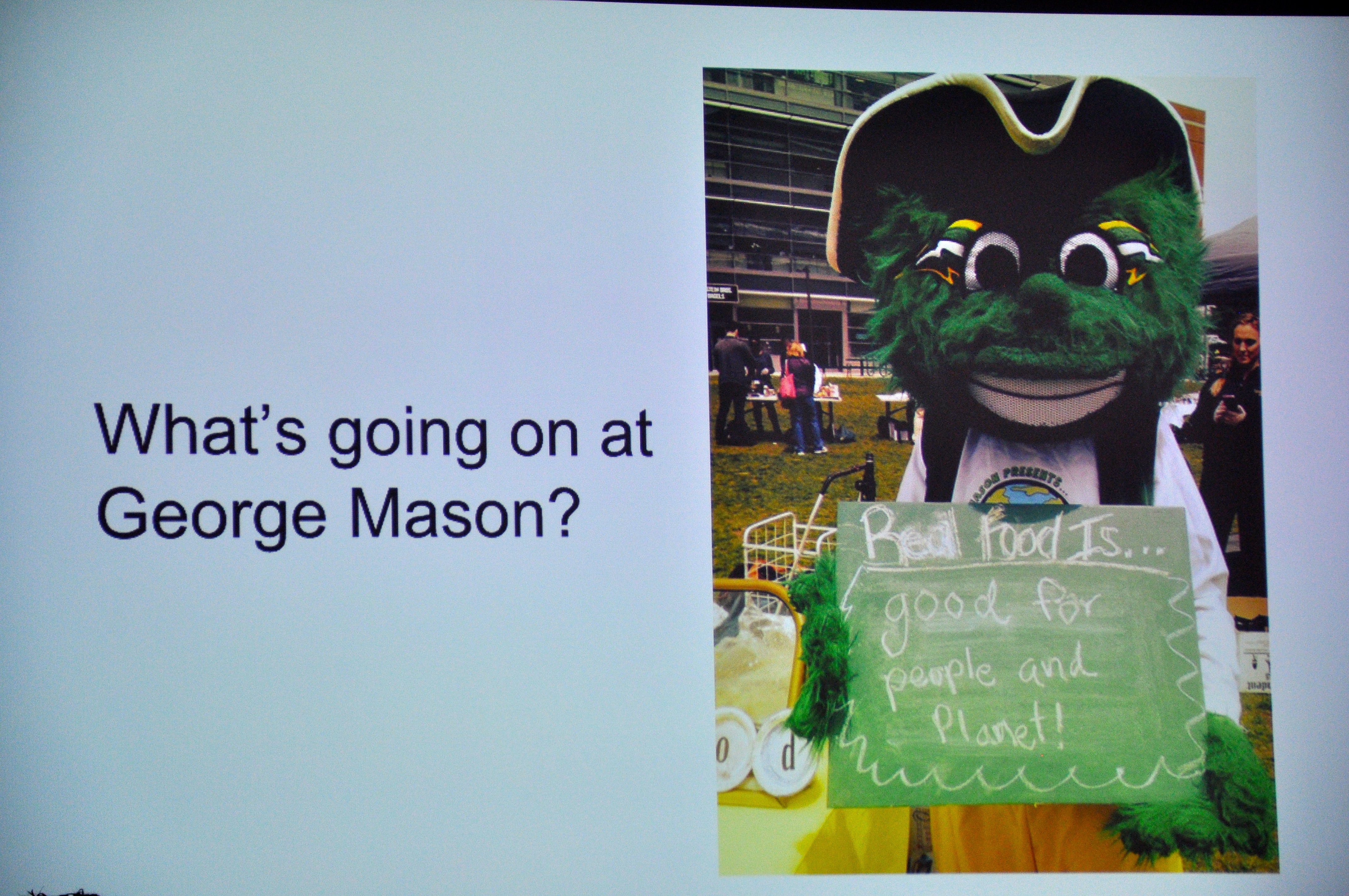 Senior and environmental and sustainability studies major Julie Ross decided to join the Real Food Challenge to become more involved with the food she ate on campus.

“I wanted to become more involved in the food I ate on campus and in general through intern research and educating myself. The Real Food Challenge network provided the tools, resources, and connection to other schools to do this, which lead [me] to doing Real Food outreach and organizing as my passion grew,” Ross said.

Their website said the RFC’s primary campaign goal is to shift $1 billion of existing university food budgets away from industrial farms and junk food towards local and community-based, fair-trade, ecologically sound and humane food sources—what they call “real food”—by 2020.

“The overall goal is to increase our ‘real’ food purchasing, which means buying more local/community-based, ecologically sound, fair, and humane.  In order to achieve this, a working group should be formed comprised of stakeholders in campus food to write a food policy that can guide us to shifting dollars to sources of real food,” said Caitlin Lundquist, Marketing Coordinator for Sodexo and Mason Dining.

When the RFC came to campus in 2013, they received the cooperation of Mason Dining to get students involved with the food they are eating on campus.

“At Mason Dining, our partnership with RFC is part of an ongoing initiative to build relationships with students and involve them in our operations.  In addition, Sodexo is committed to sustainability and has signed a formal Transparency agreement with Real Food Challenge that facilitates an open and cooperative relationship between students & dining,” Lundquist said.

The Mason RFC team said their goal was to see Mason have 20% real food offered in Ike’s, the Globe and Southside by 2020.

Ross said she thinks Mason Dining has gotten better with its variety since she’s been a freshman, but thinks there is still room for improvement.

“Something that can amplify these creative changes is more labeling of the food ingredients. The ability to talk more precisely about what we eat can create stronger conversations towards what we’d like to eat,” Ross said.

Lundquist agreed with Ross, but added that there is not necessarily a problem with Mason’s food, but with the food system as a whole because it is not sustainable.

“The true cost of the food we purchase—the exploitation of farmers and farm workers, animals, and the earth – is not included in the monetary price we pay for it. Partnering with the RFC is one way Mason Dining can help change these and other problems with food,” Lundquist said.

In February 2013, Mason’s student government even supported the RFC by creating a resolution titled A Resolution to Support the Real Food Challenge.

Ross and Lundquist both agreed that students have become more involved with the food their universities are providing them and hope to get even more student and university involvement in the future.

“This cause is increasingly important to students as the flexibility of anytime dining is focused on eating primarily in our dining halls. Mason should [also] take part in the Real Food Challenge as we can shift our purchasing towards food that increasingly supports student health, the local economy, and the environment,” Ross said.

The efforts to create a more sustainable dining culture are not only happening at Mason but on university campuses all over the country.

“College students are increasingly concerned about the food they are eating and the landscape of the food system today,” Lundquist said. “The Real Food Challenge is a great example of how they are starting to act on this concern by asking University Dining Services around the nation to use their purchasing power to help build a more sustainable food system that is healthy, diverse, local, and does not destroy the land it requires.”