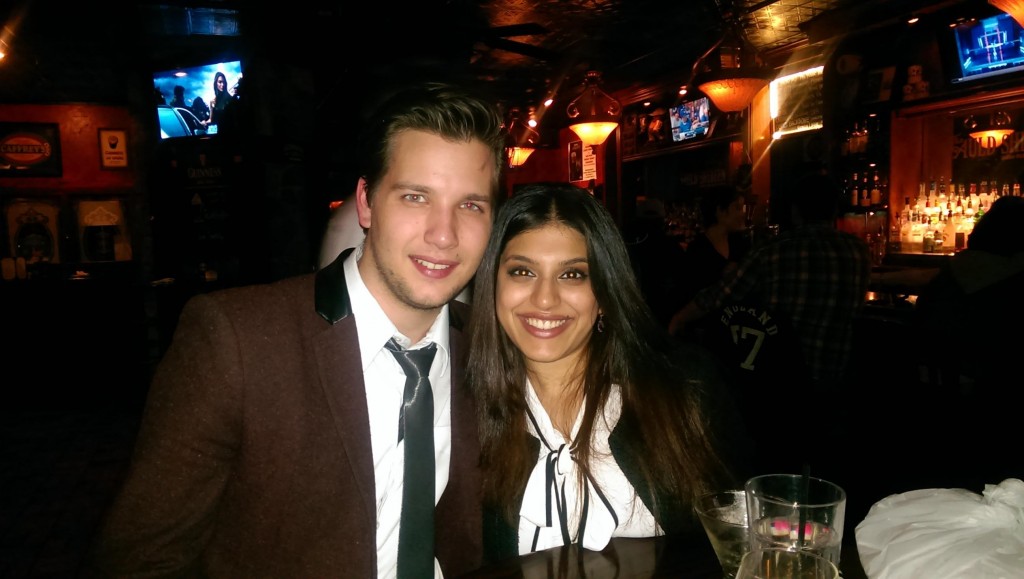 This story was originally published in the March 30 edition of Fourth Estate.

I think it was called Bellissimo, the restaurant on Main Street. It was really fancy. We ate dinner, we were there for about three hours and after that we went to Auld’s for some drinks and we were there for, gosh, five hours. Well okay wait, since we left around one, so that’s three hours.

He was very put together, he seemed a bit nervous. It was a good first impression.

I was actually talking about you [Hannah]. I was like, ‘what made you want to sign up for this thing?’ And he told me and I told him that you were my inspiration for signing up for this thing because I saw it on Facebook. And I said ‘yeah let’s do it!’

What did you two have in common?

Many things. We had our favorite musicals, or just musical theater in general, movies, tv shows, and wine.  Also things we liked like politics, our large families were in common, talking about experiences we had, for example work experiences we had.  I’ve worked on campaigns, he worked on campaigns, traveling, wine, I think I already said that. Yeah I think mainly, we spent a lot of time talking about our families, and how we both have large families. When you have a large family it’s typical to consider your cousins like your brothers and sisters. In our cultures, I’m Indian and he’s Irish, everyone is kind of just like your aunt or uncle or like your cousin. So we had a lot of that in common. Shared experiences, like “oh I’ve been through that” too.

The funniest, he did a lot of accents. So he would get really nervous and start talking a random accent. He would talk like Matthew McConaughey or speak in a Russian accent, or I don’t know. I thought his Russian accent sounded like the guy from “Despicable Me,” Steve Carrell’s character. So I just kept laughing at the accents he would do.

I think the fact that both of our moms passed away, it was already ironic that we had so much in common and then that was kind of wow, really? Of all the things we could have in common, that happened to both of us? And how we both reacted to them in similar ways I guess. Like the jokes and everything. We both have step moms. So it’s similar family background.

We had dinner at Bellissimo, which went strikingly well. We had great conversation. We very quickly realized after about an hour or two of awesome dinner and conversation that we were the last people in the restaurant.  The entire staff was looking at us and we thought that we should probably get out of there. So we left and went to The Auld Shebeen, just because it was one of the few places that was open.

[She was] Strikingly beautiful, intimidatingly so.  I thought I was completely out of my league. I didn’t know how to start the conversation without putting my foot in my mouth, which was terrifying and is not an uncommon occurrence for me. I thought, ‘oh dear god, what have I gotten myself into, I’m going to look like a totally fool in front of this women.’

Immediately after she sat down she asked how my day was.  And I just didn’t know how to answer that question. I was like, I’m not sure how much of this should I divulge. I literally had just met this person for the first time. Then we quickly started talking about college, future plans, and political leanings.  Which was terrifying at first because she was the first to say she had done campaign work, I had done campaign work too. I asked her who she worked for and I felt my heart pounding, like okay, conversation has been great so far.  But if she says someone like Gillespie, I might have just stood up and left the restaurant right there. As soon as she said she had worked on President Obama’s 2012 campaign, problem decompressed. Then we talked about politics, musical theater, music and education.

She is so bubbly and fun, that I’d say things that I’d thought would be funny and she’d laugh.  Then I wasn’t entirely sure that I was being funny. She laughs a lot, which is a beautiful trait and beautiful quality in any human being.

She told me that she was working on a movie script. That stuck out quite a bit.  Also her internship in London and being able to work at an awesome theater house as a head intern.

I thought it went fantastically. I thought she was absolutely lovely.  I want to take her out again, like so many times.  I want to take her to brunch! I’m just terrified that it’s completely one sided and that I was a total tool or fool, or any other double o-l ending word that means buffoon in some way, shape, or form.