Walking into the Patriot Center on a Tuesday night at 7 p.m., one wouldn’t think that they might hear a cacophony of instruments, ringing loudly through the otherwise empty halls.

Upon closer inspection, you would discover that this is simply a normal Tuesday night sound check and warm up for a practice of Mason’s pep band, the Green Machine. With only about three hours to work with during the week, about 80 pieces of music to cover and over 25 people handling instruments ranging from pianos to piccolos, pep band director Dr. Michael Nickins (or Doc Nix) would seem to have a serious task ahead of him if he’s ever going to have these all of these students performance ready. 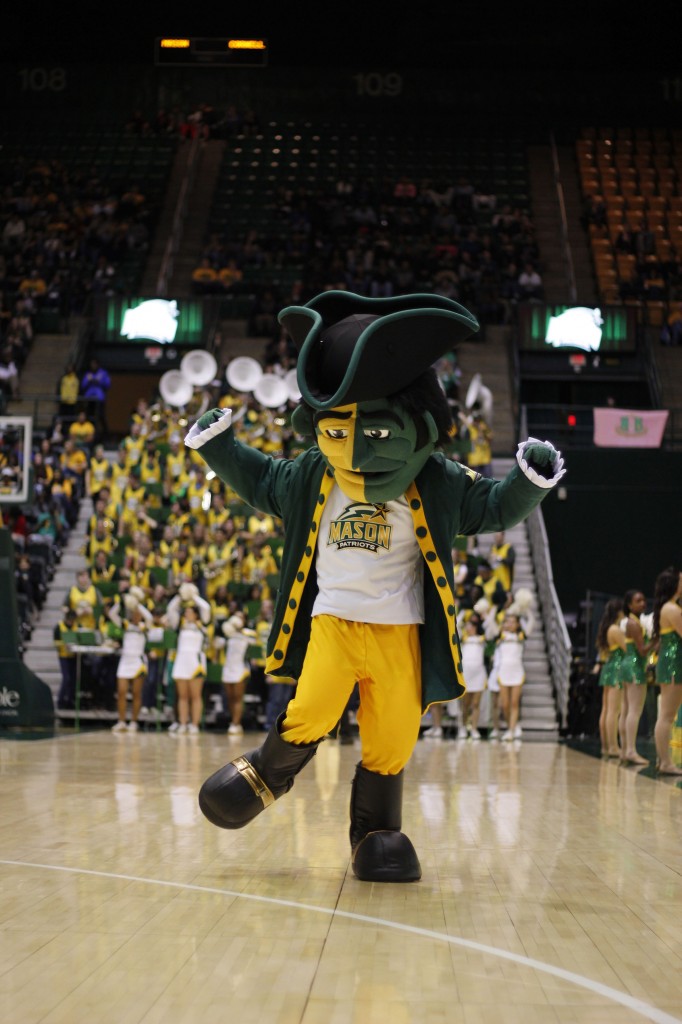 Called the “Most Entertaining Pep Band in College Basketball” in 2013 by Bleacher Report, the Green Machine has made a name for itself in the college world for being not only a sound to behold, but a sight to see. Always dressed with pride in the green and gold, the Green Machine has a stellar reputation; from the band’s propensity to produce fun, sing-along mashups of current hits to the general energy that they provide the crowd with, whether we’re winning by 10 or losing by 15.

Not only are the members of the Green Machine enthusiastic, but Doc Nix himself is known for his great amounts of gusto. With various flamboyant suits and his famous green jeweled scepter that gets swung higher and more wildly with every crescendo of the band, Doc Nix has become an icon in his own right for the Green Machine.

After coming to Mason to join the faculty in fall 2006 as the new director of the pep band, it did not take long for him to start making a name for them. By 2008, the Colonial Athletic Association recognized the Green Machine as “Best Pep Band,” and they got this award for two years in a row.

Nix also opened the doors for more non-music majors to become involved and even got students to start writing their own charts, or musical pieces for the band to perform at the games.

Joe Antonucci, a senior Music Education major who has been a part of the pep band for 4 years, is one of the many students who now makes these charts. He accredits Doc Nix for his success.

“The only reason I was able to finish any of those is because he helped me get through it with a good finished product. Without him I wouldn’t have known I could write music in any facet,” Antonucci said. He remembers when he first got involved with the Green Machine and only a few students had ever made pieces to be performed and now in this semester alone, three different people who have never even written music before have produced charts that have been added to the band’s repertoire book.

As far as non-music major involvement, Leland Powell, a junior and Computer Science major remembers the first time he witnessed the legendary pep band at a freshman event during Welcome Week.

“I saw them play and I was like, ‘That’s awesome. I want to do that,’ ” Powell said. “So right after the performance I went right up to Doc and I asked how do I get to be a part of this and he just said sign up for the class. So I did. It’s been three years now.”

Powell has been playing the saxophone for almost 10 years and has nothing in his major or minor that correlates to music, yet he advocates for the Green Machine’s importance in his life.

“They’re a wonderful group to play with. I probably wouldn’t be doing this for three years, taking hours out of my week and weekend to come play with these guys when it does nothing for my major. It’s just a great experience every week,” Powell said.

The first game of the season was Nov. 14.  The band prepared to go show off their widely accredited skills. A viral video of them practicing a spirited version of “Rage Against the Machine” from 2011 has recently resurfaced with over 2 million views.

Kelsi Grey, a harpist for 14 years and a member of the Green Machine for 3 years, proudly claims that the band sounds better than they ever have before and are in “mid season form.”

Powell is also pretty confident in the Green Machine living up to the continuing hype surrounding them.

“Sometimes at practice it can get a little iffy, but at games we just seem to always get in our groove and get it going! We just really don’t have issues,” Powell said.

So between Doc Nix and his scepter swinging and possible mashups of Imagine Dragons and Fall Out Boy, the Green Machine is fully prepared to make this year even better than the last.