JJ Davis, Senior Vice President of Finance and Administration, said the state cuts “are really a snapshot of a long-term trend.” 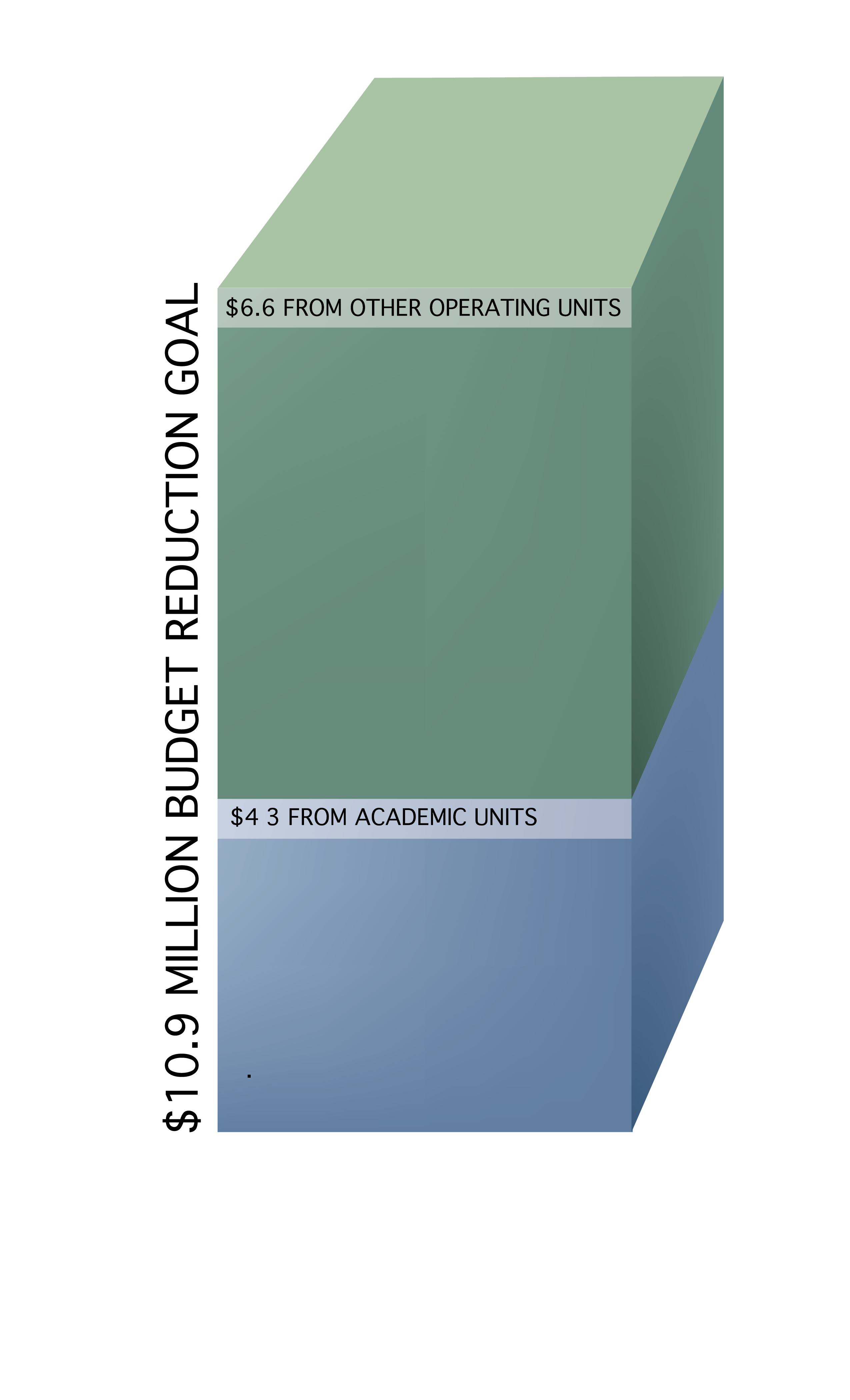 While explaining the reasoning behind the cuts at a town hall in early October, Davis and Wu reiterated their main priority of protecting and advancing the core academic mission of the university. Thus, Wu mentioned that cutting courses was not conducive to preserving the university’s academic core.

Among the academic units, Wu and Davis announced that the College of Humanities and Social Sciences will take the most cuts with $697,600, followed by the College of Science and then the Volegnau School of Engineering. Finance and Administration will have the most deductions of all operating units at $2,335,400. Central Academic Administration take the next cut with $1,435,900 and then University Life with $567,800.

Davis said rising student debt is largely occurring because of reduced state funds, but there is no “media conversation” concerning that aspect.

Davis also explained state funding reductions are a problem currently facing many universities. According to Provost David Wu, 49 states are spending less per student in higher education than they were in 2008. 28 of those states have reductions of more than 25%.

“The situation we find ourselves in is not unique,” Davis said. “This is a national phenomenon, national trend.”

Davis and Wu said the $2.8 million in the State Reduction Stabilization Fund is money the state already owes the university for health care and pension funds. However, they are unsure if they will receive that money. Davis said that they do not know at this time whether the state will ask for further cuts in fiscal year 2015.

The $1.9 million University Stabilization Fund was also created to improve the graduate admissions process, increase out of state recruiting and help with the university’s digital strategy and IT infrastructure due to recent information intrusions.

Davis said meeting the amount of required cuts would not have been possible without support from Mason faculty and staff.

“We ultimately had to return $4.7 million mid-year, not an easy feat,” Davis said. “I think a big shout-out to the faculty and staff for helping us through that. That was in a matter of two and half weeks. We had hundreds and hundreds of people helping us cut mid-year just as students were arriving. When you think about doing the impossible, the team at Mason gets a lot of credit for that.”

According to Davis, raising tuition has been one way the university has responded to increased state disinvestment, along with growing the student body, cutting expenses and increasing scholarships from private donors.

“The only way to manage through this, and the level of this, is to have all options on the table every year, all the time,” Davis said.

Despite the raise in tuition, Davis said Mason has managed to remain less expensive than other Virginia universities. However, she said raising tuition has been necessary to maintain academic quality.

“We’ve seen significant cuts from the state budget, but we also have a commitment to the students to make sure they get a good academic experience,” Davis said.

According to Davis, who was previously part of the Office of Management and Budget for the state of Delaware, constrained state resources have led to the decrease in higher education funding because, with limited funds, the state usually prioritizes health and social services like K-12 education, police departments, etc.

“They’re pretty critical issues, number one,” Davis said. “Number two, they tend to have pretty vocal constituencies, and three, they don’t tend to have any other options in terms of how they fund their budget.”

On his blog, President Ángel Cabrera wrote about the correlation between reduced state funds and rising student debt with help from Mason public policy doctoral student Kirk Heffelmire. The post said that over the past 15 years, the continual decrease in state funds has caused Mason’s tuition to double, and that has contributed to a rise in student debt.

“One of the most direct consequences of raising tuition is the ballooning of student debt,” the post continued. “Recent college graduates hold the highest student loan debt burdens ever. The majority of students graduate with at least some loan debt.”

Taylor Pigram, a member of GMU Democrats, was not surprised by this relationship.

“We have a tuition hike each year,” Pigram said, “so [student debt] will inadvertently be affected through that because you’re going to have to come up with more money or loans to finance.”

The post also said tuition raises are shifting the responsibility of paying for a higher education from public to private, meaning students are expected to pay a larger percentage of their college education than 15 years ago.

“Now, as students, you’re being asked to foot the bill for the vast majority of your education,” said Katharine Destler, Mason Assistant Professor of Public Policy.

Beverley Harp, a University Scholar and co-founder of the Roosevelt Institute, said states might be finding it easier to cut from higher education versus other programs, like Social Security, because “old people vote and students don’t.”

“Getting real students talking about, ‘Look, if you don’t fund George Mason one of the realities for us is greater tuition,’ and what does that mean? That equates for many of our students into more debt,” Davis said.

Harp said that for some sources of private funding, like scholarships, transparency is important.

“The trend towards private donors isn’t one I’m thrilled about,” Harp said. “I feel like it goes against what a public institution is supposed to be, but it’s kind of reality. If we’re headed in that reality, in that direction, we should make sure we’re doing it the right way and students understand where their funding is coming from and it’s not hyper-politicized.”

For junior Emma Copeland, those private sources of aid are contributing to her amount of debt. Due to her financial situation, Copeland said she was unable to qualify for federal and state loans. She said most of her aid is in the form of loans that come from private sources. One of those loans, she said, has an interest rate of “over eight percent.” She said that loan is “going to be kind of a doozy if I recall correctly.”

Copeland said her and her mom “don’t one hundred percent know” how they will pay the bill for the coming semester.

“We’re both in the mindset of, ‘Just please finish college,” Copeland said. “The obvious point of going to college is to get the payoff, but then you get the weird cycle of why did you take out the loans to go to college if you’re just going to pay off your student loans anyway?”

According to Destler, some voters may feel the public to private shift is not a negative one.

“I think there’s a certain level at which taxpayers, certainly taxpayers who are not college age or don’t have close family members who are college age, probably see that argument with a certain amount of appeal,” Destler said. “You’re the one benefitting for this, you should put money in.”

However, she said the shift is still an issue because the state is contributing less and less to a valuable citizenry.

“Our country depends on a well-educated citizenry in a whole range of fields,” Destler said. “College at a rigorous university, like George Mason, should be about students exploring a wide range of intellectual pursuits and challenging themselves and making missteps and learning more about the subjects they’re studying and learning more about themselves in the process.”

At the town hall, Davis said that, despite the trend of decreased state funding, Mason is better off than other universities because “43% of our students carry no debt.”

“In the case of George Mason University, the comparatively high employment levels and wages of our graduates, our comparatively low tuition, and the fact that more and more of our students transfer from the community colleges and work during college have helped keep student loan default rates among the lowest in the country,” the post said.

“It does help that we do have an off-campus population,” Pigram said. “I know that some people have avoided debt by living at home with their parents.”

Cabrera’s post said that although Mason is better off than most state universities, the trend with funding needs to reverse or else student’s education will suffer.

“If the state doesn’t pay,” the post said, “students likely will, either in the form of quality, or tuition, or time-to-degree or a combination of the above.”