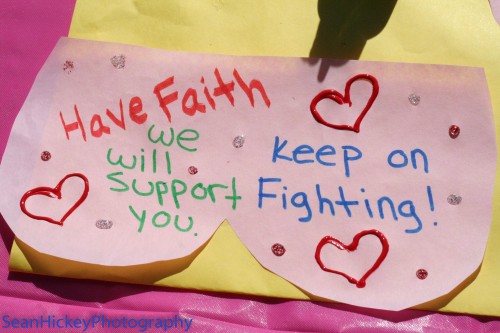 Two cancer awareness and education events will combine to form a more cancer-inclusive event to promote health and prevention.

Angela Johnson, the associate director and wellness coordinator of Wellness, Alcohol, Violence Education and Services, explains that the new event titled “Give Cancer the Boot” which will be on October 2nd in North Plaza, is a combination and expansion of past years’ “Breastival” and “Testival” events which only explored breast cancer and testicular cancer respectively.

After receiving feedback from students over the years as to why WAVES was focusing on just those two cancer forms, it was decided to incorporate others including breast, testicular, skin, lung, prostate and ovarian cancer.

“We don’t want anyone to think we are prioritizing a type of cancer over another… so we wanted to add more,” Johnson said. “By having six cancers included in this event, we certainty have not been able to touch on all of the cancers, but we figured we need to start somewhere.”

Cait Patterson, a WAVES intern and senior studying community health education, said it is great to include as many types of cancer in the event as possible.

“It’s good to bring awareness to them all equally,” Patterson said. “They all equally affect people, some of them affect people more than just breast cancer or testicular cancer, like skin cancer is the biggest cancer and is very inclusive so I think it’s important to bring some more attention to that and all the cancers in general.”

Patterson also noted that college years are the primary time to do prevention education.

“Cancer is something light year’s away for a college student [in their minds], but no, I have so much time to prevent it. This is the key time to prevent, not just cancer but a lot of health issues,” Patterson said. “I think the [college] age group is very focused on short term goals so realizing that there is something that happens after graduation [is important], your health goes on for more than a year or so.”

Ashley Freeman, a first year graduate student getting her masters in public health and global and community health, also works in the WAVES office and said she knows from personal experience how college students can mistakenly view cancer as unimportant or not affecting to them.

“I know personally when I think of cancer I think of older people, I don’t think of being twenty-three and being affected by cancer,” Freeman said.

Freeman explains how a lot students have a “that’s not going to be me” mindset when it comes to cancer.

“Being so young, you feel invincible,” Freeman said. “[Students think] I’m young, I’m fine, I’m doing everything I’m supposed to do to be healthy. I don’t really have to worry about health problems until later on in life.”

Freeman argued, however, that students can be affected by cancer and should be aware of this “scary reality” as she put it.

“Preparing for this event [I found out] that testicular cancer literally can affect men who are seventeen,” Freeman said. “Being in that age range, it’s like wow, I can be affected… it’s not something that only affects 40-year-olds and it’s something that we need to be focused on now and the seriousness of it.”

Patterson added that students shouldn’t be embarrassed to learn about and practice cancer prevention methods or look for cancer signs and symptoms.

“It’s never too early or weird to care about your health,” Patterson said. “No one’s going to make fun of you because you’re 21 and checking yourself for cancer.”

Johnson explains that WAVES’s goal is to promote health on campus as opposed to direct health services.

“So while we wouldn’t necessarily be doing an examination for somebody who thinks they may be at risk for cancer, it’s our job to get the word out about signs and symptoms to look out for [and] where you can go for treatment options,” Johnson said. “It’s our job to help instill healthy life-long practices for students.”

Due to the past success of the Breastival and Testival, the “Give Cancer the Boot” event will incorporate some of these events’ traditions.

Johnson says that, amongst other elements of the event, there will be fun games to teach students about cancer and cancer prevention.

“We’re trying to show students that even though you feel young, and your skin isn’t’ wrinkled yet, be very cognizant about making sure that you are wearing sunscreen everyday [for example],” Johnson said. “Letting people know what they can start doing at this age in order to prevent something from happening in the future.”

Johnson explained that with cancer, early detection is key because many cancers are a lot more readily treatable and curable if caught early.

“If people wait until they have reached an advanced stage of cancer, before they’re fully getting educated on it, they may have missed an opportunity to be able to get this taken care of, cured or treated,” Johnson said. “We want to catch people before it’s too late and try to instill behavior change or things to look out for before it’s too late, while they’re still able to do something about it.”