Two university staff members have won the opportunity to travel abroad later this year and next year as part of a staff exchange program sponsored by the Office of Global Strategy.

This November, Jennifer Hamilton, the gifts coordinator for University Libraries, will travel to the University of Basel in Switzerland. Cheryl Welch, the support manager in the Graduate School of Education, will go to the Mason campus in Songdo, South Korea next March.

The two recipients were notified of their selection with a surprise visit by Rita Rowand, the program manager for global relations and protocol in the Office of Global Strategy, who created the program last year in an effort to further globalize Mason. Rowand says that European universities have conducting exchange programs for a while, but it is relatively new to the United States.

“When we were looking into the strategic plan, one of the key goals that came out was a global learning platform,” Rowand said. “One of the things that really jumped out at me was to cultivate a global mindset in our student, faculty and staff.” 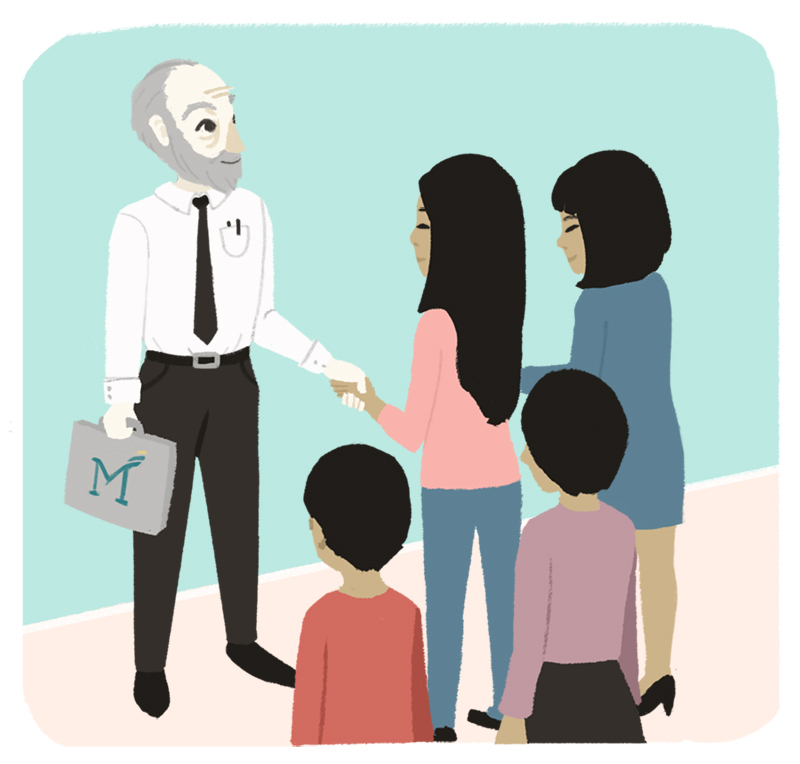 Applicants are asked to submit a resume, cover letter and program statement explaining why they would like to go, how their visit will help them and the impact it will have on their department and Mason as a whole. After the application window closes in June,  recipients are chosen by two different committees, one within the Staff Senate and another in the Office of Global Strategy.

Rowand saw that there were opportunities for faculty to travel abroad, but staff members did not really get the same privilege. She says this program reaches out to all classified staff within the university, from administrative roles to facilities.

“I just felt that creating some opportunities for staff members to go abroad would help to globalize and internationalize the campus,” Rowand said. “They would also bring back good ideas for their departments and for Mason.”

Both Welch and Hamilton want to bring back new ideas to their respective offices and departments.

“I hope to make some people here happy with what I bring back,” Welch said. “I want to talk to the other department where I used to work and this one and see what things they may be interested in me finding out from the school there. I just hope I come back with some great information for people.”

In selecting partner institutions, Rowand says she picks locations that she has personally visited, which span six continents. The partner university covers the staff’s housing and most of their food while the Office of Global Strategy pays for travel expenses, including travelers’ insurance and miscellaneous costs. According to Rowand, they want travelers to feel comfortable in their new location. The program is currently looking for a new partner, with possibilities in Turkey.

The one-to-one swap enabled a staff member from the University of Bozel to visit Mason last week. Welch’s visit is not a swap, but rather an off-shoot of the program and an opportunity to get global experience, according to Rowand.

“We felt it would also help the Korea campus in their administration reach in that they could learn from [Welch] in some of the things she does,” Rowand said.

While Welch and Hamilton are mostly excited for their visits, neither of them speak another language and are somewhat worried about communicating. Hamilton says getting around on the mass transit system in Switzerland worries her, but she has been assured that most people speak English.

Welch, who has never traveled abroad, says that she wanted to go to Korea from the start and is mostly excited for new foods and to see the Songdo campus.

“It looks like a wonderful way to learn and a beautiful city,” Welch said. “Somehow I had the feeling that I was going to be a winner. I could just feel like an urgency kind of. The way that it all transpired was pretty amazing and I turned [the application] in like five minutes before the deadline and I thought ‘I think I’m gonna win this.’”

The library at the University of Basel is one of the largest in Switzerland, so Hamilton is excited to visit and learn how they operate. She also says that she is interested in privacy in the digital age and library archives.

“I’m really curious about how the university being located within the city of Bozel, how they interact with the local government, like the libraries open use for the public,” Hamilton said. “I would like to see what it’s like to be a student in a city, whereas Mason is more suburban.”

Although both women are nervous about their visits, Rowand says that she sits down with the recipients to prepare them for their trips.

“I spend time briefing them, telling them what to expect, certain things they should look out for, how to deal with jet lag.” Rowand said.

Rowand says that she is very pleased with the program and is glad it was still able to happen amidst the recent university budget cuts.

“In this atmosphere of constrained budgets, we were able to create something that has a modest budget and it came from unanticipated funds so we didn’t have to carve it out of something,” Rowand said.