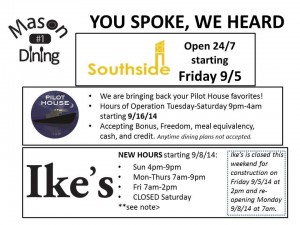 However, in a letter sent out to residential students today, Mason Dining says they “misjudged” the demand. According to Mark Kraner, Executive Director for Retail Operations, he and dining managers met with students at Student Government’s “What Do You Want Wednesday.” From there, the Food Service Advisory Committee met, debated and proposed changes to the schedules.

“We made a plan that got as close as possible to what the students wanted, including 24 hour Southside, and the old Pilot House and its menu back”, said Storm Paglia, the executive undersecretary for Dining Services in Student Government. “Going forward, students can anticipate more late night options and better food quality across the board.”

“Dining heard the students and is making changes,” Kraner said. “We will put these in place and review later this semester to see if any changes or adjustments will be needed for spring.”

Pilot House will be closed this weekend so that dining staff can prepare for the change. Kraner says they still need to train staff and purchase more food. The facility will reopen on Tuesday, Sep. 9.

Fall for the Book preview graphic