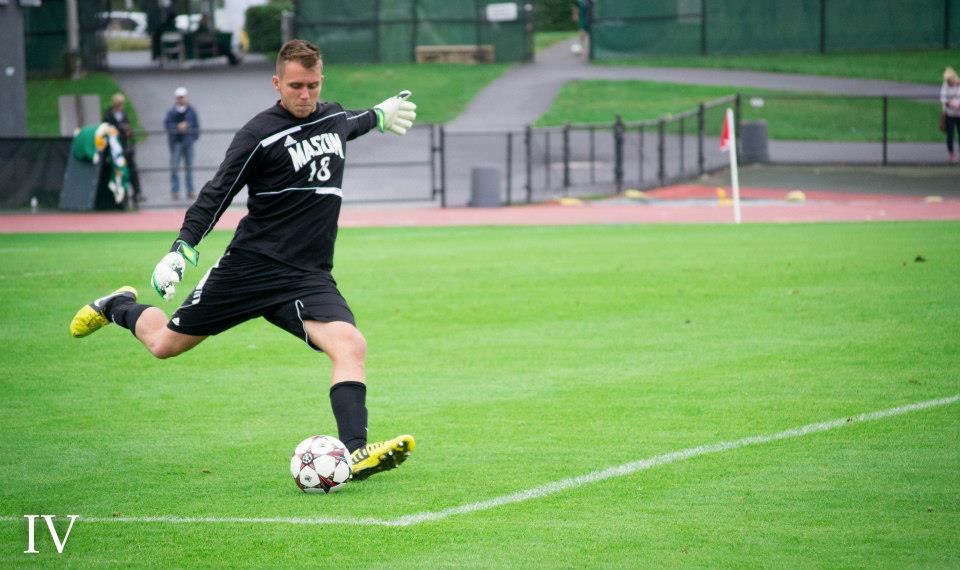 On Tuesday, Atlantic 10 coaches predicted Mason’s men’s soccer team to finish second in the A-10 Conference for the 2014 season. The poll predicts St. Louis University  to repeat its first-place finish from last season after out beating Mason and Virginia Commonwealth University for the regular season top spot.

With nothing but exhibition matches played thus far, preseason polls are not necessarily an accurate prediction of the season. Although the Billikens, Patriots and Rams may stand out among the rest of the competition, the long A-10 season can always have surprises.

For Mason, there are several factors that could contribute to Coach Greg Andrulis’ team exceeding preseason expectations and taking the next step after last years second place finish.

Why They Could Succeed: Confidence and Experience

Finishing first in regular season offers a team bragging rights and favorable postseason draw. For Mason last season, they had to beat a team brimming with confidence after winning the regular season title while playing on their home field in order to win the A-10 tournament. Despite playing in a hostile stadium, Mason managed to beat tournament host St. Louis 1-0.

That victory earned the Patriots a spot in the NCAA tournament, where they defeated the College of William and Mary, a former Colonial Athletic Association rival. Now, with one season in the conference under their belt, a stronger familiarity with opposition and a taste of national competition after several years of absence, Coach Andrulis’ men enter conference competition in the beginning of October more confident than they did 12 months ago.

Why They Could Struggle: Tough Schedule

While Mason boasts a talented team heading into this season, there are not many pushovers on their schedule. The Patriots face top 25 teams Virginia, UMBC, Navy and Wisconsin in non-conference play while their conference schedule features VCU  and St. Louis who both earned votes for top 25 recognition in the initial NCAA rankings. This tough schedule coupled with losing eight players from last year’s team could prove challenging to the Patriots this fall.

After a stellar rookie season in which he allowed only 0.71 goals per game in 21 appearances, goalkeeper Steffen Kraus will have to disrupt the opposition’s forwards while directing the defensive line in front of him. The chemistry between the goalkeeper and defenders will be crucial to the team’s overall performance. Going into his sophomore season, Kraus has been named to the has been named MAC Hermann Trophy Award Watch List. The list is presented at the beginning of each season and lists some of the best players in collegiate soccer. The MAC Hermann Trophy is collegiate soccer’s equivalent of the Heisman Trophy.

Zach Herstek’s return will also be important for the Patriots . After making 18 appearances with three goals and an assist last season, the 2013 All-Rookie Team member might assume a role that would see him act as a catalyst for Mason’s attacks. Along his side he will have experienced Timi Mulgrew, who has 54 appearances for Mason to his resume over the course of three years.

Up top, Jannick Eckenrode will be one of Mason’s top threats to the opposition’s defense. The transfer from Radford University scored a team-high five goals in his debut season with the team last year and registered four assists in 20 appearances. With one full season under his belt, he has had time to adjust to coach Andrulis’ philosophy and to the team atmosphere. If he has found that comfort level, he could make an even greater impact this time around.

One thing that coaches of any sport — whether at the professional or collegiate level — cannot avoid is the loss of players. Due to graduation, Mason lost eight players from last year’s roster, including Julio Arjona, Zak Haapaoja, Alex Herrera, Hugh Roberts, Wes Sever, Chase Miller, Laurent Newsome and Sean Cote. Many of these individuals were stalwarts in the starting lineup and played a key role in the team’s success last season. While it will not be easy for the coaching staff to fill the void left by them, it is important that in each line of play Andrulis can count on returners who can act as leaders and help the new players adjust to their roles

Overall, Mason looks to have what it takes to compete for first place in the conference. Should they finish first, the team would host the A-10 tournament in Fairfax.

View all posts by thandarov →

The Rise of Specialty Coffee