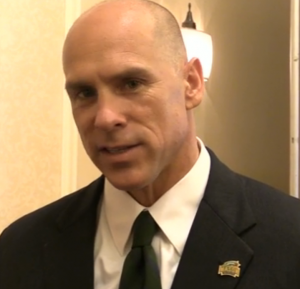 Edwards, 48, is the fifth athletic director in Mason’s history, and he succeeds Tom O’Connor who held the post for 20 years. Edwards comes to Mason after serving as the athletic director for Jacksonville University and Newberry College, but perhaps local football fans will remember him from Super Bowl XXVI where he intercepted 2 passes off Hall of Fame quarterback Jim Kelly earning him Super Bowl MVP runner-up honors as a member of the Washington Redskins.

In addition to his Super Bowl ring — which adorned his finger during the press conference — Edwards also brings an extensive history of successful fundraising from his past athletic administration positions. He raised $3 million during his two years at Jacksonville University while also overseeing a $28 million growth while serving as the chief financial officer for the University of South Carolina, his alma mater.

While his strength on paper is in fundraising, Cabrera feels that Edwards has all the skills necessary to lead the Mason athletic department.

“I think when you’re looking for someone to fill a position like this you look for a combination of capability, passion and principle,” Cabrera said. “With Brad, you have all three in spades.”

Edwards is very familiar with the area and the university thanks to his time spent in the area when he played for the Redskins. Edwards and his wife Marlana would take their three children to events at the Patriot Center when they were younger. Even after leaving the area, Edwards continued to follow Mason athletics.

When answering questions from the media after statements from Cabrera and Edwards, both men were asked about the potential of football at Mason. Here, Cabrera fielded the question.

“With the cost of education at an all-time high, we can’t add something that puts affordability at risk for students,” Cabrera said.

The press conference ended on a light-hearted note with Cabrera suggesting an impromptu fundraiser by passing the hat given to Edwards as he was announced. Edwards assumes his new role as athletic director officially July 1.

OPINION: Mason should reconsider its waste and recycling policies