International student-athlete Radoslav Popov has made a positive impact on George Mason University’s men’s volleyball team and tries to do the same with his actions outside of the gym as he builds a new life in a world different from his own.

Popov, a freshman from Razlog, Bulgaria, came to Mason with a rich volleyball resume, which includes participation in world and European championships with his country’s youth national team. He won trophies and three most valuable player awards during high school.

Popov, the Patriots’ leading scorer, has earned the recognition Offensive Player of the Week in the Eastern Intercollegiate Volleyball Association twice this season after dismantling the defense of conference arch-rival Pennsylvania State University and Sacred Heart University with more than 20 kills in each match.

“When in 2011the team left for the World Cup in Argentina, Radi had a minor injury,” said Popova, who is the only parent in the star player’s life. “The medic kept frequent communication with me and told me that my son is a very calm and caring teammate.”

“After one of the must-win matches, the doctor congratulated me that Radi played a key role for the comeback win,” the mother said. “He said that with his calmness and mental stability Radi helped his teammates believe in the win.”

Popov’s coach at Mason, Frederick Chao, said that although opposing coaches and players may see him as a scoring machine that seems to spring up over the net with ease, with the team he shows his other side: a charismatic young man who can be the heart of every company.

“He’s actually a funny guy,” said Chao, who is in his 14th season with the Patriots. “He has a good sense of humor and appreciates a good joke.”

“I learned throughout the year how much the guys enjoy being around him,” Chao said.

Popov, who misses family the most, said that he does not want to be remembered just with his actions on the court.

“I have been successful with the national team and I have come all the way to America to study and play,” the criminology major said. “I consider these huge accomplishments, but when it comes to my closest people, I want to remain a humble boy from Razlog who loves his family and friends and does not change regardless of what I achieve in life.”

Nowadays, seven months after Popov came to Mason, his goodness, which his kindergarten teachers from back home attribute to his name (from radost, Bulgarian for “happiness”), has spread outside of the locker room. After every match, regardless of whether he just put the opposition out of misery with another kill by his venomous right hand or has been kept quiet by a resilient defense, people jump over the cardboard advertisements surrounding the court and stop by to tell the young-looking talent “good game” or just give him a pat on the back of his dark-green uniform. Although he gives everyone a proper “thank you”, Mason’s No.3 admits that he does not recognize many of them.

Some of the regulars there are the Greshams, the family of Popov’s teammate Graham. They know the freshman as well as anybody else in his new world could, since he spent some of his Christmas break with them at their Richmond home.

Graham’s younger sister, Briezy Gresham, got to know Popov while teaching him how to play Call of Duty and when they watched Supernatural, a TV show they both enjoy. 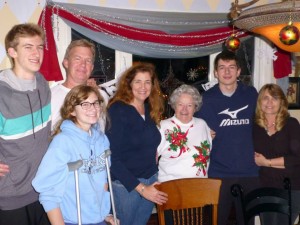 “I think Radi is a fantastic, awesome person,” Gresham, 18, said. “He’s fun to be around, a funny guy, really nice, and a really sweet guy.”

Her mother, Shari Gresham, likes to refer to herself as “Radi’s American mama” and said that she did not have any reservations toward the Bulgarian before welcoming him at her home in December.

“I know Fred, the coach, and I think Fred picks good guys,” Shari Gresham said, “so I didn’t have any reservations as far as, ‘Oh, who is this strange person that is going to stay at our home?’”

“I wanted to make sure Radi felt comfortable and that he was happy,” she said, “and he was very easy going, he just blended right in.”

To help him feel at home, Gresham went through the hassle to make traditional Bulgarian bread on Christmas Eve, an act that he appreciated. He later tried to thank his hosts by making them his favorite meat-and-ketchup sandwiches. Shari Gresham said that the episode will be remembered by the noble act, but not so much with the quality of the sandwiches.

Although he now looks like the happiest and most loved person on the world, life in America wasn’t always happy-go-lucky for Popov. Despite holding one of the several full scholarships in the volleyball program, at first he faced financial hardships, on top of the expected culture shock and nostalgia, which he fought with the help of his team.

“My teammates, with whom I quickly became friends, helped me out a lot,” Popov said. “In the beginning I would spend most of my time with them. Also, the coach has made it clear multiple times that I can count on him.”

Even though Popov admitted the initial weeks were tough, he is proud of taking the risk to come to the U.S.

“At first I had no intention to incorporate volleyball and school,” he said in a serious tone. “I was considering a professional career in volleyball, but later realized that without education there is no future.”

“If I had gone into professional volleyball, I would still be home with my family and friends, and little would change,” he said. “I decided to take a risk and come to a new world, to study and to begin a new life.”

Coach Chao said that language proficiency is always the biggest risk when one goes into international recruiting – for the student-athlete and the program alike – because academic setbacks can lead to overwhelming stress for the student and, on the other hand, endanger his playing eligibility. He also said that Popov shattered these fears of his early in the recruiting process.

“When we started communicating, we would chat back and forth on the computer,” Chao said, “and he was typing as fast as I was typing, in English.”

Between school and volleyball, Popov’s daily schedule often keeps him out of his dorm for all but the sleeping hours. Despite everything, he has a 3.8 GPA in the ACCESS program, which helps first-year international students develop their English language skills and incorporates supportive classes with these from their major’s course load. Even on nights after a match, as he struggles to stay awake over his homework, he says that he hopes these early academic results to be the beginning of a successful and memorable college experience.

“As a student, Radi is a really good guy and I think he is very smart,” said Mahmud Akhundov, an international student from Azerbaijan who is in five of Popov’s classes. “On most of the writing assignments in our English class and our PROV 106 classes, he gets some of the higher grades in the class.”

“He’s an honest guy, and he’s very friendly,” Akhundov said. “Whenever I need the help, he always tries to help me.”

After graduation, Mason’s star player will not hurry to end his American adventure.

“My preference after graduation is to find a job related to my major in the U.S.,” Popov said with a dreamy expression, “but if things don’t exactly work out the way I want them to, I may have to look for a job back home.”

For Popov a professional volleyball career is still an option for the future, but he looks on it as a backup plan.

“I never close the doors behind me,” the 20 year old said, “after four years I may go back to Europe and play professionally if I am good enough. However, my priority is to find a lucrative job rather than having fun through volleyball.”

“Right now, he is at the right place,” his mother said. “He is doing well at school and with the sport, thanks to all wonderful people around him.”

Whether Popov stays in the U.S., returns to Bulgaria, or life swerves him into a completely different direction, he is determined to follow his own path and says that he will try to be the change he wants to see in the world, a phrase he remembers from his childhood. He will always have his mother, with whom he has shared every hardship and who has shown him that one does not need a fatherly figure to grow strong and become successful.

“Ever since Radi’s birth I have been the happiest and proudest mother in the world,” Popova said, “and I believe that this will not change in the future.”

Man on the Street: Mason Dining