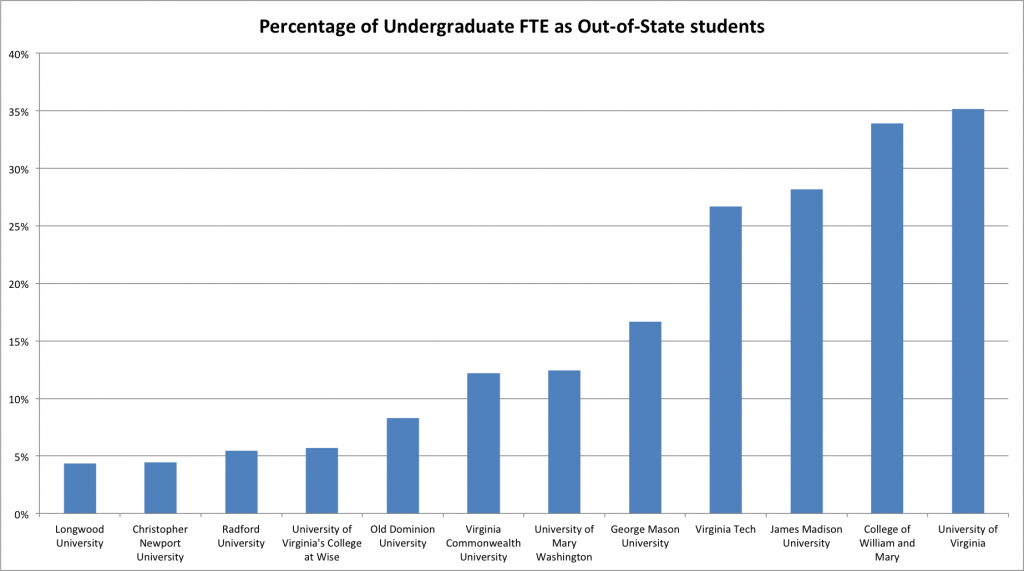 Three proposed bill in the 2014 legislative session would restrict out-of-state enrollment to 25 percent of the undergraduate population (data from State Council of Higher Education).

For the past few years, a group of Virginia state legislators have repeatedly attempted to restrict out-of-state enrollment in the Commonwealth’s public universities.

“This is something I hear from my constituents over and over again,” Barbara Comstock, a Republican delegate representing Fairfax and Loudoun Counties told the Loudoun Times. “This issue comes up unprompted from families with school-aged kids, their grandparents, their friends and neighbors. Everybody knows somebody affected by this.”

“This issue” is the apparent infiltration of out-of-state students into universities that were designed to serve Virginia students. Over the past couple months, media reports have concluded that a growing number of Northern Virginia families are frustrated that their 4.8 GPA, hyper-involved high school children aren’t making it into the University of Virginia.

In 2003, about 19 percent of undergraduate students in public four-year institutions were from outside Virginia. In 2013, that number has gone relatively unchanged at 18.3 percent.

“State policies have really gone a long way in the past four years to expand the number of seats for in-state students,” Tom Kramer, executive director of Virginia21, a non-profit lobbying group that works on state higher education issues, said in an interview. “That’s a direct result of the state funding following those in-state students.”

There are currently three bills proposed for the 2014 legislative session that would cap the number of out-of-state students enrolled at 25 percent of a public university’s undergraduate population. Currently, there are four state universities that exceed that threshold: the College of William & Mary, Virginia Tech, University of Virginia and James Madison University.

So why do state universities enroll out-of-state students in the first place? The first reason might be because schools want to create a vibrant academic atmosphere that brings in the best and brightest students from diverse backgrounds – that includes students from outside Virginia.

Perhaps more concretely, enrolling out-of-state students has been a response to declining financial support from the state. According to a report earlier this year, state support per-student has declined by 22 percent since the early 90’s, shifting the cost of education from Virginia taxpayers to the students.

“If schools cannot raise tuition to pay the bills, they have to go elsewhere to raise revenue,” said Kramer. “They can make cuts on the academics side, or they can go raise revenue somewhere … they look at the out-of-state side.”

One state legislator, the father of two high school students, told the Washington Post that the issue was between paying $60,000 a year for a private school or between $20,000 or $30,000 for a public education. What he doesn’t realize is that restricting out-of-state enrollment would likely result in higher costs for in-state students.

According to a commissioned study during the 2013 legislative session, a 25 percent cap on out-of-state enrollment would have resulted in $150 million in revenue loss for the four universities listed above.

This would have been made up by increasing tuition for in-state students, making public higher education less accessible even with the increase in space. Restricting out-of-state enrollment takes away an important tool for universities trying lower in-state tuition.

Mason’s funding problem in one question