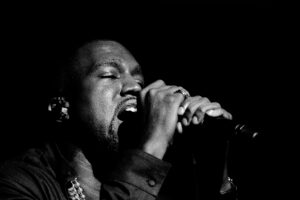 Legendary writer Ernest Hemmingway was quoted saying that “every man has two deaths, when he is buried in the ground and the last time someone says his name.” At a time where reputation is everything and where it can easily be tainted, especially with cancel culture always looming, I want to add a third death that man can experience: the death of his reputation.

Kanye “Ye” West would begin to experience such a death on Oct. 3, during a fashion show in Paris. At this fashion show, he spoke to a crowd while wearing a shirt with the words “White Lives Matter” printed on the back. This would only be the beginning of a series of events that would get him banned from social media, leaving behind a tattered legacy of a once great musician.

Since the Oct. 3 debacle in Paris, West has continued to dig himself into a deeper hole, with antics including posting antisemitic tweets, making false public statements about police brutality victim George Floyd and even buying Parler, a far-right social media website rife with misinformation and hate speech. The ADL states that Kanye denied the possibility that he could be antisemitic because he believes “as a Black person he is actually a Jew”, a view consistent with Black Hebrew Israelite thought. Due to these antics, he has since lost sponsorships with various companies, including Adidas, Sketchers, and Balenciaga. West has long been flirting with the far right; he was an avid supporter of Donald Trump since 2016 after all. However, it seems that his antics have gone way too far, earning the ire of the very people who once enjoyed his music.

It’s no secret that West suffers from debilitating mental health issues. In fact, I myself write about this in an article detailing antics of his that occurred earlier this year. I defended him saying that the backlash he received resulted from the public stigmatizing his struggles with mental illness. While this is still very true, this is no longer a mental health issue. West’s recent comments and antics have pointed towards a disturbing trend in his ways of thinking. While mental health issues should not be ignored, they should not be used as an excuse to say and do such horrible things. It will never be a valid excuse for bigotry.

It really is a shame what has happened to West. He used to be such a prominent figure in pop culture who inspired millions with his music. One can even say that he was an artistic genius. This genius died the second West put on the MAGA hat. It is not clear whether he is doing this as a publicity stunt or because he actually believed these things. Unfortunately, his recent behavior has pointed towards the latter explanation.

Here lies the reputation of a legendary artist, one that broke barriers and set trends. The death of his mother and his divorce from Kim Kardashian may have helped spur his downfall. What was once a cultural icon worth billions has become a joke and an alt-right puppet. His musical genius will be remembered fondly even after it has drowned in conspiracy and paranoia. I would say that he will be missed, but his reputation died in such a way that it has been disfigured beyond recognition.

Kanye “Ye” West has witnessed the third of three deaths: the death of his reputation. Unfortunately, the cause of death was a drawn-out and agonizing suicide.