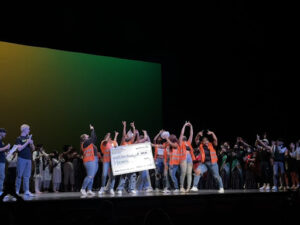 The Mason community stepped onstage with flourishing culture and expression

Students, parents, and staff buzz around the lobby, all excited to see what awaits them in the Center of the Performing Arts. Crowds start rushing to the doors and people are swarming the theater to grab good seats. The stage is lit, the MCs test their mics, and every single row of the audience is filled. They wait with anticipation and suddenly the lights go down; the show is about to begin.

Such was the scene at Mason’s annual International Week dance competition, held on Thursday, March 31 in the CPA.

The annual cultural dance competition is a significant part of International Week and has been for the past 41 years. This year, there were teams representing several corners of the world, from the Azucar Latin dance team, to the Sigma Psi Zeta sorority, representing some of their sisters’ Ecuadorian and Vietnamese cultures, as well as the KDC Mythic dance team, who performed a popular K-pop dance item, and many more.

International Week has been around since the 1970s, when it began as “International Night.” It all started in a small lecture hall, and now this dance competition is one of the biggest performing nights the university has to offer.

International Week is a week-long bash that celebrates 130 countries that the Mason community represents. It is co-hosted by Student Involvement, University Life, INTO Mason, International Programs and Services, Mason Cable Network and the Center for the Arts.

Among the performances was Mason Ke Rang, a popular South Asian dance team for Mason; this year marked their 11th performance in the dance competition.

Another crowd favorite this year was the Phi Iota Alpha fraternity, the oldest Latin fraternity in existence.

“When I saw the crowd, I wasn’t nervous, I was excited to put my fraternity’s name on the map,” Nico Pinto said. Pinto serves as one of the Phi Iota Fraternity’s performing members.

“It’s a great way for Mason to get together and appreciate each other’s cultures” Aiman Hamid said–one of the audience members.

This night is special for many, because not only do students get to express their culture,  it’s a way for audience members to get a peek of the culture the world has to offer through dance.

“It’s great that Mason has this event because it showcases how diverse Mason really is.” Sidrah Hamid said.

Of course, this was a dance competition, and the win went to the Urbanknowlogy 101 dance team, a hip-hop group that had the crowd going wild, earning them a $400 grand prize.

THE SCHOOL OF THEATER AND MASON PLAYERS PRESENT “EVERYBODY”