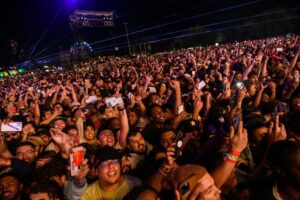 Following the tragic loss of life at Astroworld, we must maintain concert etiquette

Following the tragic loss of 10 lives at Travis Scott’s third annual Astroworld Festival in Houston, multiple distressed and angry fans posted videos of their favorite artists stopping their shows to check on the crowd.

As a concertgoer myself, this concept is quite normal and is oftentimes very necessary. Something which many of these distressed fans were keenly aware of.

However, concert culture has an undeniably entangled history with violence, whether it be the traumatic riots and fires that burned down Woodstock ‘99 or the high-octane (but mostly fun) mosh pit at a Slipknot show.

The key to understanding the difference between these two is in the overall vibe. And, yes, I said vibe.

For example, John Mayer recently paused his performance at a small concert on Feb. 9 hosted by SiriusXM and Pandora in Los Angeles.

“Are they conscious? Give me a thumbs-up if they’re alert. Need an AED? Well, that’s not someone who’s alert,” Mayer stated.

Now, of course, a John Mayer concert is not the most likely place one is going to get hurt and the small venue setting can make safety much easier.

But even Playboi Carti, a generally high energy performer, has been known to stop a show if necessary, as seen at a 2021 Lollapalooza performance.

Regardless, their shared concern for even the one or two fans who may not have remembered to drink enough water at the show prevents the overall performance from being ruined for the fainting concertgoer, or even the collective audience.

These are good examples of the positive vibes as there are clear efforts made to ensure crowd safety.

But here’s where this gets interesting. Just a couple of weeks ago, singer Billie Eilish stopped her Feb. 5 show in Atlanta to help a fan who was having trouble breathing.

In response, Eilish became one of many targets of Kanye West’s recent online tirades where West accused the singer of singling out Travis Scott in her attempt to check in on her fans.

In a since-deleted Instagram post, West stated “COME ON BILLIE WE LOVE YOU PLEASE APOLOGIZE TO TRAV AND TO THE FAMILIES OF THE PEOPLE WHO LOST THEIR LIVES NO ONE INTENDED THIS TO HAPPEN TRAV DIDN’T HAVE ANY IDEA OF WHAT WAS HAPPENING WHEN HE WAS ON STAGE AND WAS VERY HURT BY WHAT HAPPENED.”

In the words of Eilish, “Literally never said a thing about Travis. Was just helping a fan.”

Clearly, Kanye interpreted her pausing the show, and presumably the many other artists making a point of this recently, as disrespectful to Travis Scott. West went on to threaten canceling his Coachella performance if Eilish did not apologize.

While many of West’s recent posts may not be coming from a healthy place, the targeting of a young artist who has been fortunate enough to avoid any of her own major controversies seems like more of a distraction from Scott’s responsibility than a concern for his well-being.

And anyone in music who works to make a strong divide between those wanting chill or safe concerts and those wanting more energy will only create echo chambers of violence at certain shows.

We need a middle ground where mosh pits and “rage culture” can also be considered safe and caring. But maybe we’ll just add that to my list of idealisms.

In a performance on Feb. 19 at The Anthem in Washington, D.C, Action Bronson and Earl Sweatshirt showed differing approaches when fans seemed uncomfortable in the crowd.

Having attended the show myself, it became apparent during Sweatshirt’s set that the area closest to the stage became more heavily compact and, before long, a few fans stumbled and fell in the crowd.

Thankfully, everyone around those falling seemed genuinely concerned, with many people raising their hands to request for a pause to the show while the fallen fan was helped up.

Regardless of how fine everything turned out to be, it was initially hard to tell if the fans were too drunk, had slipped, or were genuinely passing out for some other nondescript reason. So, the obvious response from the performer should be one of concern and care, especially when that’s the response from the fans in the area. In other words, they should read the vibe of the crowd.

However, when Sweatshirt was made aware of this, he was reluctant to stop the show and even accused the crowd of wanting attention once he did stop.

Later on, however, Bronson’s response to crowd discomfort was met with a full stop and a subsequent restart of the song he was performing.

In the words of Bronson, “Come on, man. Stop the f—ing song again. Somebody else passed out. We gotta make sure they’re ok, man. There’s a lot of f—ing people here, hold on.”

While Sweatshirt’s comments that the crowd was attention-hungry put a damper on the overall vibe for me, Bronson’s comments seemed to resurrect the crowd.

The biggest difference was that I could feel that it actually mattered to Bronson whether or not his fans left The Anthem safely, whereas Sweatshirt wanted to brush it aside and continue providing the crowd with his orations of mumbles. Very Kanye-esque, if you ask me.

I really have to say I am a huge fan of Earl Sweatshirt and Action Bronson and this was, overall, one of the greatest concerts of my life because of the quality of their performances. However, I was also a huge Travis Scott fan, but after the tragedy at Astroworld, I had to think a bit harder about whether or not I would be safe at any of the concerts I attend.

Artists that rely on my purchase of a ticket, an album, or some merch, should understand that I need to feel safe at a show in order to feel like I still want to go.

After all, how I feel when I’m being entertained matters because it impacts the vibe and if the vibe isn’t good, I just won’t keep going. And that’s no fun.

THE BENEFITS AND COSTS OF EMERGENCY BUTTONS ON CAMPUS

BRAVING THE TIGHTROPE: HOW NOT TO SPREAD AWARENESS FOR ASD