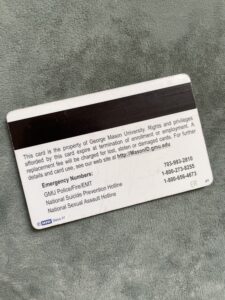 Students give their opinions on a potentially life-saving solution

Mason is home to one of the most diverse and populous colleges in the state of Virginia. With the Fairfax campus having over 37,000 students enrolled, how much effort should be put into making it safe for all of its students?

As of Feb. 17, Mason provides numbers to different campus resources including but not limited to the Mason campus police if a student should find themselves in distress:

However, some campuses have taken this a step further by implementing what is known as “Blue Light Emergency Phones”. The emergency system, popular among colleges like Virginia Tech, Virginia Commonwealth University, William & Mary and more feature buttons posted around campus which would call the police once pushed. This system in return could suggestively save lives in specific situations.

Virginia Tech, having a 2,600 acre campus, offers a summary to its outdoor emergency system through the Virginia Tech Police Department.

“There are 118 blue light emergency phones located outdoors on Virginia Tech’s Blacksburg, Virginia campus. The phones are available 24-hours-a-day, 7-days-a-week and connect users with an emergency dispatcher with the push of a button. They also have a flashing blue light located at the top of the phone pedestal that is activated when the button is pressed for help,” according to the police department’s website.

While Mason’s Fairfax campus is smaller than Virginia Tech’s, would the cost and time of this system really be worth the institution’s effort?

The installation of Blue Light Emergency Phones could add a newly accessible layer of safety on campus for students and staff, especially those who must walk alone at nighttime. Additionally, this would appeal to students and parents who are looking to join Mason, as it provides a symbol of a safe school. Ultimately, in rare situations where students cannot immediately access a cell phone, they will be able to use this system along with everyone else.

Currently, emergency buttons are incredibly popular among campuses in America for these reasons. According to a 2011 report by the U.S. Department of Justice, 96 percent of campuses with over 15,000 students have incorporated the Blue Light Phone System on campus.

With the benefits of emergency buttons noted, some concerns exist that the system may not be as efficient and rather would not be necessary. The operation would have required costs when alternatives are available such as the Mason Police number, and other choices such as a safety app could be explored as well. Though, these options would sacrifice accessibility.

Mason is already perceived to be a generally safe campus compared to other institutions, lowering the urgency for such a system. According to Niche, Mason has received a “B+” rating under the safety category.

There is even a possibility, with any tool, for abuse through students who could press the buttons without need, wasting the time of police and resources. This abuse is not uncommon. In 2011, the University of Colorado received 235 calls to their blue light emergency phone system, however, 214 of those calls were prank calls.

With this, the question is implied: Is there such a thing as “too safe”?

Multiple students at Mason weighed their opinions on the idea of implementing emergency blue phone lights on campus. The women of Mason explained their value in this system due to the fact that they must often walk alone at nighttime.

One woman in support of the emergency buttons, junior Madelyn Magrath, said “I think that it would be really important to implement emergency buttons around campus. I would feel a lot safer, especially as a woman and having late classes.”

Junior Elisa Switzer also described her urgency for this system following the same situation as Madelyn.

“I think having emergency buttons would be a great idea and I’m surprised we haven’t implemented them already.” Switzer said. “It would certainly make me feel a lot safer walking on campus at night and I believe many others would feel the same way. I think introducing these buttons should be a priority of the university right now.”

In contrast, some students feel less necessary as they already feel safe enough at Mason without the emergency system.

Freshman Sarah Cornell said, “I’m neutral to this change. I don’t see the need for them, I believe GMU to be fairly safe and there are emergency services available to us already.”

Others weighed both factors but ultimately decided in favor of this idea.

On Mason being a big campus, freshman Christiana Anderson, explained “we are the largest school in the state and extra protection could be extremely effective. There are of course some risks with implementing the buttons, however, I believe that those are risks we should be willing to take for the safety of our school.”

In terms of offering another solution, freshman Steven Placke offered a solution to deter possible misuse so that the system may be efficiently carried out.

“I support, as it would provide security services on campus an exact location where the incident occurs. The only potential requirement to prevent tampering is a video camera recording the button to ensure no individuals press the button as part of a joke,” Placke said.

According to the GMU Department of Police and Public Safety, their mission statement is as follows.

“The mission of the George Mason University Department of Police and Public Safety is to provide a safe and secure environment for all university employees, students, and guests. Embracing the principles of community policing, the Department will work collaboratively with academic and administrative units, individuals, and organizations in furtherance of the mission of the University.”

“The George Mason University Police Department is responsible for protecting constitutional guarantees and impartially enforcing the law. We believe that integrity is the basis of public trust and that honesty and equality in the delivery of police services is essential. We commit ourselves to uphold these values and to foster cooperation and respect within our community.

As the law enforcement department of a state institution of higher learning, the Department will always strive to incorporate best practices in its policies, and operate with a commitment to equality, fairness, openness, and transparency with the University community.”

With students voicing their opinions, and the priorities listed by the Mason safety department, the emergency blue light phone system may be in the university’s best interest, though the sacrifices of installing this system still remain.

RESURRECTING THE VIBES OF CONCERT-ETIQUETTE